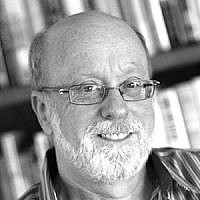 About eight years ago my son, then in high school, played trumpet in the school orchestra. He chose to cross a wide street (Moorpark) in the San Fernando Valley in the dark and did not see a pipe sticking up at a 45 degree angle from a truck flatbed. He hit the sharp end with his forehead and under his eye. I arrived in the parking lot by chance a few minutes later and in the dark saw a kid standing on the sidewalk and I could tell he was bleeding. Then he spoke, and I was shocked as my son’s voice came out of his mouth.

The paramedics arrived to take him to St. Joseph Hospital in Burbank. Wrung out l headed to the back of the ambulance and one of the paramedics quietly suggested that I drive to the hospital as I would need my car to take him home. I live in the city, don’t know the area and flustered blurted out that I didn’t know the way. He started explaining it to me but could see I wasn’t grasping it. He then said, “Just follow us and stay right on our tail.” And I did through red lights. A plastic surgeon came and Asher is fine though the slash was down to his skull.

Several days later I wanted to thank the paramedics, tried to call and was told that there is no way to direct dial the paramedic station. I had their names and station on the receipt.

So I called the main paramedic office and someone explained that they could call the station and have the senior officer call me. I asked them to do so. When the paramedic station phoned, I explained I wanted him to please thank the two paramedics for me. He was taken aback, expecting a complaint, and said to me, “Nobody ever calls to thank us.”

This week, I had someone come out to work on my computer and show me a few things that I didn’t know how to do. He was fabulous and spotted malware and did a number of scans to clear it. I now know how to scan old 3 x 5 inch photos which allowed me to share them.  So I called the guy who owns the company, who I know, as their office is near Fred’s Bakery and I often get cookies, and if I have a question go into the Tech Care office on the same block. I told him that Phil who came out was fabulous. He said, “Nobody ever calls to tell us that.”

I’ve been disheartened of late about all the venom on social media. Yesterday, I saw a Facebook thread of Jews exhorting the Israeli Army to bulldoze over all the Palestinians and someone else suggesting they kill them all. I unfriended the person whose thread it was, reported it to FB and check in a few hours and it had been taken down. So there’s some loose connection to the above.

About the Author
Howard Kaplan's THE SYRIAN SUNSET, Anovel of the Syrian Civil War, the failure of the West to save the Syrian people, and how that inaction against the Russian incursion in Syria emboldened Vladimir Putin to invade Ukraine was published on November 22, 2022. The film adaptation of his THE DAMASCUS COVER, starring Sir John Hurt in his final film, Jonathan Rhys Meyers, and seven Israeli actors is available on Starz in the U.S. and Netflix globally.
Comments