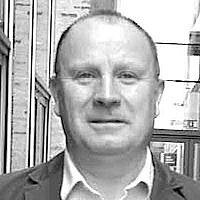 The Blogs
Gary Mason
Apply for a Blog
Please note that the posts on The Blogs are contributed by third parties. The opinions, facts and any media content in them are presented solely by the authors, and neither The Times of Israel nor its partners assume any responsibility for them. Please contact us in case of abuse. In case of abuse,
Report this post. 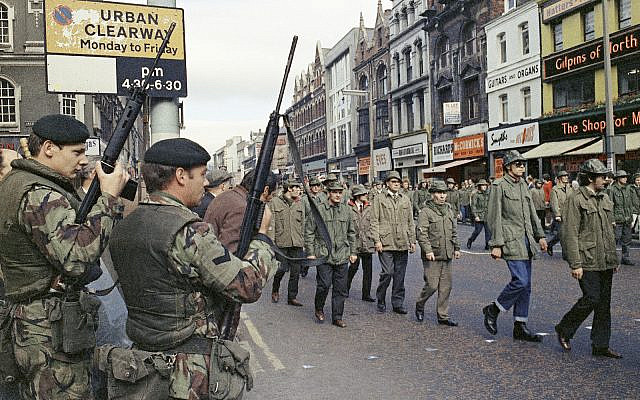 In this Aug. 1972 file photo British troops watch as members of the Ulster Defence Association parade through Belfast, Northern Ireland during the violent 30-year Catholic-Protestant conflict known as "The Troubles." (AP Photo, File)

I was born, grew up and still live in that sectarian cockpit called Northern Ireland, the very fact I type the name Northern Ireland probably means I’m from that British Unionist tradition. Irish Nationalists many times don’t use that word, they call it the north or the six counties. You understand the power of words in your region – Israelis call it the War of Independence and Palestinians the Nakba.

I have visited your region many times in the last number of years. I’ve hosted more than 1,000 Palestinians and Israelis in Belfast and Dublin looking at some of the lessons we learned as we tried to build what, even today, is still a very fragile peace process. The American Senator George Mitchell who chaired our long protracted peace talks that ended in the Good Friday Agreement, prophetically commented as it was being signed, “If you think getting this agreement was difficult, implementing it will be even more difficult.” Twenty-three years after the signing of the agreement, his words still ring immensely true for those of us who work in conflict transformation, peacebuilding and facilitating difficult conversations.

I imagine, like many people across your region and the world, you’re asking the question of what happened this week to bring about this phenomenon of internal violence between Arabs and Jews in the state of Israel. On my visits to the region, I often wondered why there were not more tensions between those who inhabit the same areas, but with different narratives and different viewpoints of the intense politics and history of your country.

I do know this: the road to resolution can be a long one. Having lived as a young boy through the early years of that conflict in the Irish space, when many commentators were saying this conflict will not last. Little did I realize it would last through my boyhood, teenage years and well into my adult life.

Some people believed when the British Army arrived here in 1969 it was for a limited operation to restore law and order. The operation officially ended at midnight on July 31, 2007, making it the longest continuous deployment in the British Army’s history, lasting 37 years.

Not too dissimilar to yourselves, we had many attempts at building peace, and yes many failures along the way. There are many articles, books and journals that have been filled with reports on how we eventually got over the line in the spring of 1998. There are without question many lessons, but for me one lesson remains in the forefront: it took courageous leadership from both sides, people who were willing to take risks to overcome the status quo for the next generation.

Political and civic leadership is essential to achieving peace. Leaders on all sides of my conflict, and I hope eventually yours, must sincerely believe that change is preferable to the status quo. Having reached that conclusion, they must be willing to take the risk to achieve peace, all the time providing a vision that ensures they maintain the confidence of their grassroots supporters.

Can this happen in your space, a desire for a better future that encourages leaders to take the risks?

Can leaders with a desire for a better future face down accusations of betrayal from within their own communities to achieve this?

The attempts to resolve the Northern Irish conflict through physical force were ultimately futile, they did not result in sustainable safety for the two opposing communities. Sadly, physical force encouraged the cycle of violence where each side sought to hurt the other side as much as they hurt you. Security was only achieved when leadership in the public square was emphasized, dialogue was a priority, and the root causes of the conflict addressed.

The late Chief Rabbi Jonathan Sacks echoed the observation of many that genocide is preceded by dehumanization, and he spoke of linguistic violence in the public square. Can political leaders, religious leaders and community leaders find a new language and a new framework? There are no solutions in the comfort zone of one’s own absolutist position, only courageous leadership will move your society forward.

A friend and colleague in Israel emailed me a few days ago and commented, “This inter-communal violence has the potential to turn our cities and our nation into a patchwork of mini Belfasts.”

Please do all in your power to avoid that. And to those who have political, religious and community influence, just ponder for a moment the example and influence of a language that heals and empowers and gives hope in the public square. It can really make a difference.

About the Author
Rev. Dr. Gary Mason is a Methodist minister and directs a conflict transformation organization based in Belfast called "Rethinking Conflict." Prior to this he spent 27 years as a Methodist clergy person in parish ministry in Belfast and has played an integral role in the Northern Irish peace process. Mason is a close advisor to Protestant ex-combatants on the civilianization efforts of paramilitaries. He was instrumental in facilitating negotiations with paramilitaries and government officials, and in 2007 his contribution was formally recognized by the Queen. In 2009, Mason’s church was the stage from which Loyalist paramilitaries announced their weapons decommissioning.
Comments