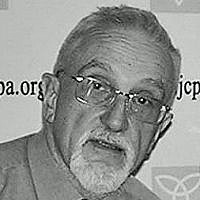 The Blogs
Manfred Gerstenfeld
Apply for a Blog
Please note that the posts on The Blogs are contributed by third parties. The opinions, facts and any media content in them are presented solely by the authors, and neither The Times of Israel nor its partners assume any responsibility for them. Please contact us in case of abuse. In case of abuse,
Report this post.

The annual First of May celebration in Norway concerns not only the International Worker’s Day. For Norwegian trade unions, its second role might be called Israel Hate Day. The main coordinator of events is the umbrella organization of Norwegian labor unions, LO. Before each major gathering texts and topics are agreed upon locally. They then usually appear on banners or posters. Most highlight Norway’s domestic problems. But when it comes to foreign issues, the most dominant focus is on hating Israel.

At the main 1st of May celebration in Oslo, Salma Abudahi, from the Gaza’s Union of Agriculture Work Committees (UAWC) spoke, appearing directly before the speech by Prime Minister Jens Stoltenberg. Under the heading “Support the state of Palestine – Boycott Israel,” Abudahi called rockets a “symbol of resistance” and said that occupied people have a right to defend themselves. “It is important,” said Abudahi, “to understand the proportions. The Israelis are killing our loved ones all the time.”

In Norway’s second largest town Bergen, demonstration poster slogans included: “The Israeli State = Apartheid,” “Repeal the Gaza blockade – Boycott Israel!” and “Syria bleeds – The UN must ensure peace.” In the third largest city Trondheim, a banner said “Boycott Israel – Break ties with the Histadrut.” Pictures of young children holding these hate posters are on the internet. In Norway’s fourth largest city Stavanger, a demonstration banner read: “Free Palestine – Tear down the walls – Boycott Israel.” Only in Kristiansand, the country’s fifth largest city, located in the Southern Bible belt, were there no anti-Israel texts. 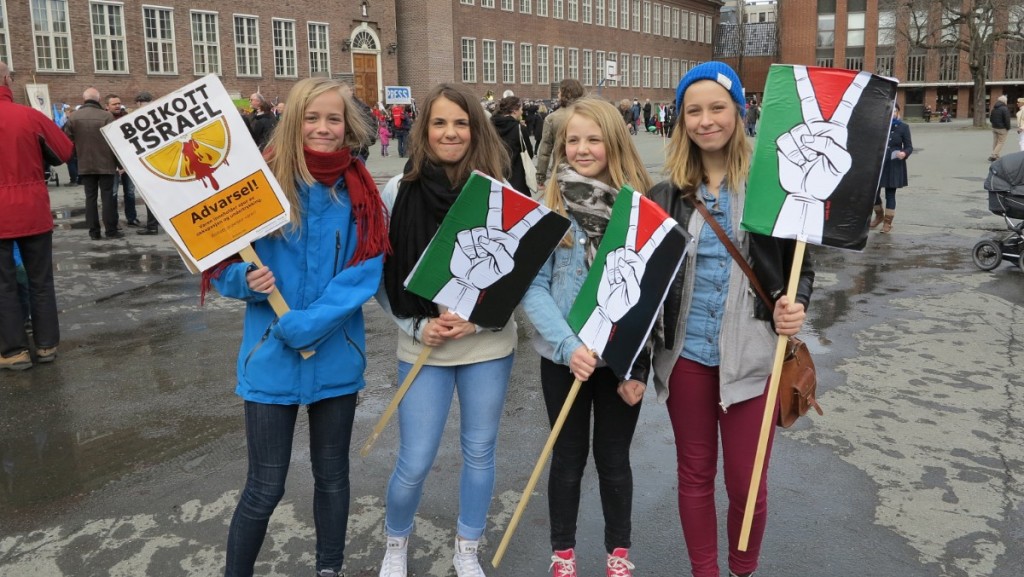 In Oslo, the Norwegian affiliate of the International Christian Embassy Israel organized a counter-demonstration in favor of Israel in front of the Parliament building. There were speeches from leaders of the Progress Party and the Christian People’s Party, both of which are in the opposition. Posters said: “YES to Israel, Freedom and Democracy” and “NO to boycott.” Participants numbered several hundred.

Trade union hate propaganda against Israel has been a feature of Norwegian union politics for years. In her 2002 May 1st speech, then-leader of the trade union Gerd Liv Valla already advocated a boycott of Israeli merchandise, “as long as the conflict continues.” 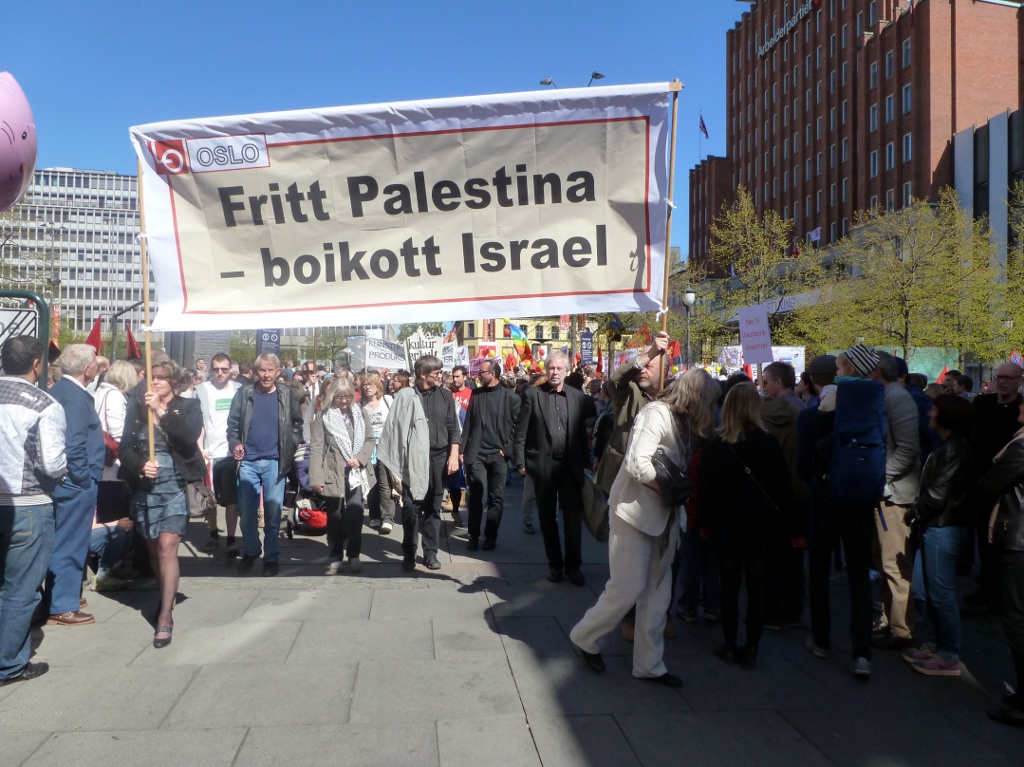 LO’s largest affiliate is the Union of Municipal and General Employees with more than 300,000 members. In a major meeting in 2011, the attendees were met upon arrival by barbed wire, checkpoints and soldiers. It was meant to give them a sense of what “a Palestinian goes through on a daily basis.”

Last year Prime Minister Stoltenberg spoke on May 1st in Bergen, where Israel was the only foreign country fiercely attacked by participants. Stoltenberg didn’t react to that in his speech, even though singling out Israel in a way unlike any other country meets the European working definition of an anti-Semitic act. When the Norwegian embassy in Tel Aviv asked me why I had published that Stoltenberg was a part-time anti-Semite I gave this as one of several examples in my reply.

In Norway there is regular incitement against Israel by government ministers, trade unions, media, NGO’s, academics and so on. In 2012, a study financed by the government and conducted by the Oslo Holocaust Center, showed that 38 percent of Norwegians agree with the statement, “Israel behaves toward the Palestinians like the Nazis behaved toward the Jews.” From this one may conclude that about one and a half million adult Norwegians think that Israel represents “absolute evil.”

Researchers who compiled this report published this data but “forgot to mention” that calling Israel a Nazi state is anti-Semitic. By not including this in the anti-Semitism statistics they created the false idea that anti-Semitism in Norway is low. This “omission” is used by the Norwegian government to promote the same false belief.

Norway’s “progressive” anti-Israel hate mongers have achieved the same goal of projecting that Israel is the current absolute evil in a different way. They use the method of the “thousand cuts,” widely publicizing bad news about Israel almost daily. This is accompanied by various other acts. One of the latest is King Harald V giving Norway’s highest awards to two Hamas supporters, the medical doctors Mads Gilbert and Erik Fosse. Singularly, none of these “cuts” causes much harm, yet all of them together lead to demonization of Israel.

This method is accompanied by a second manipulation, the omission of much positive news about Israel. This is then combined with leaving out often extreme negative news about Palestinians, other Arabs and Muslims. Behind this is what can best be described as “humanitarian racism.” It means that for instance that weak people are not held responsible for criminal deeds. However, responsibility is one of the essential parts of the difference between man and beast. The logical conclusion is that there are many such racists among the Norwegian self-defined “anti-racist camp.”

About the Author
Manfred Gerstenfeld is a Board member and former Chairman of the Jerusalem Center for Public Affairs (2000-2012); He is a recipient of the Lifetime Achievement Award (2012) of the Journal for the Study of Anti-Semitism
Comments