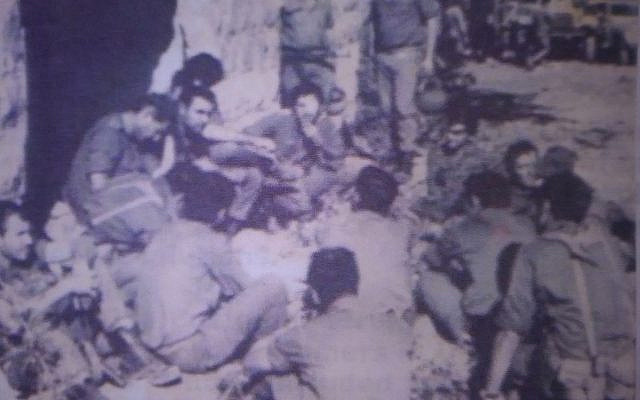 How does one face fear? Do you overcome your fears when you get on an elevator? Elevators get stuck. Until a technician arrives, until the Fire Department arrives and frees you from your steel enclosure, what thoughts run through your head?

How does one face fear? You stand atop the ten meter high diving platform, petrified. The knowledge that many, many others have jumped off, dived off, and miraculously lived, really doesn’t help you until…you do it.

How does one face fear? You bury your face into the soft soil, loosened by the incoming artillery shells screaming as they explode all around you. Perhaps this one, the one you won’t hear, will tear you apart, until none of the shells have. This time.

How does one face fear? Sure, you are trained and you are capable. You have done maneuvers and patrols. You entered rooms after tossing grenades into them. You fired off mortars and machine guns and slept in mud and marched for kilometers and kilometers, your shoulders bleeding from the grinding of the stretcher you carried. But no one was shooting at you and wishing you were dead.

How does one face fear? You know, and you have known for many years now, that really, no one gets out of this life alive. We all die, at some point, don’t we? No one lives forever. And you know that this thought does not help you overcome your fear of dying.

When I was voluntarily drafted into the IDF, when I volunteered to become a Golani Warrior, I truly didn’t reckon with the thought that I could be killed, that I could die in combat, that my parents would grieve over my body. No. Those thoughts never entered my head.

That thought entered shortly after Yom Kippur on October 6th, 1973, when I was reminded of a Latin phrase I had come upon years earlier in Mr. Tennyson’s Latin Class. Nos Moritamus… we, who are about to die… Te Salutamus…. salute you. I, along with my brothers-in-arms of the 13th Battalion of the Golani Brigade was about to die, and I had to face that fear.

Later, much later, I saluted our Platoon Medic Amir. We were on Tel Shams, captured from the Syrians late in the war. The fortified Tel had tiny bunkers and we used them to stow our gear and sleep when our turn came to do so. We lay next to each other, head to toe, eight or ten men in a bunker no wider than two meters and no longer than three. It was Amir’s turn to stand watch. And it was mine after his. He never returned from his watch, a Syrian artillery shell had found him.

I saluted Nachshon and Moshe, with whom I had shared my first six months of Golani’s training. Moshe, the only child of Holocaust survivors, who died fighting to regain the outpost atop Mount Hermon. Nachshon, adopted by a kibbutz family, whose dry, innocent humor had us in stitches.

And, I saluted these four men who were from the same kibbutz, Yad Mordechai, as myself.

I saluted Uzi, who held me under water as a prank. I had been swimming laps in the kibbutz pool, when I felt someone push me down to the bottom of the pool. After he ran out of air, I stayed on the bottom of the pool for a while. He got worried. He then got really worried, and later told me that he thought he had drowned me. Uzi, whose father had also sacrificed his life fighting the Egyptians during Israel’s War of Independence.

I saluted Avinoam. A twin and the youngest of four sons born to Nushka and Avraham, his death fighting on the Egyptian front simply devastated his parents. They would never be the same. Avinoam’s oldest brother Eitan became my mentor and teacher in so many ways.

I saluted Mordechai, “Dudu” we called him. Close to the end of the war he was killed in Syria during a Syrian commando skirmish atop Mount Hermon. He was a veteran of the Six Day War.

And what about those who were wounded? My friends Ben and Hezzi? Their physical scars would heal, but would they ever be the same emotionally? Those who returned to their homes, scarred by shrapnel and by nightmares? Those who, like myself, live those terrible days and weeks and months again and again?

Nos Moritamus, we die again and again every year around this time. What could we have done differently? Are we Monday morning quarterbacks, giving advice to Dayan and Golda? To Dado Elazar? Just listen, please! Don’t send so many of us home, please! Strike first, please! Too many of us will die fighting! Can’t you hear us?

It is now 48 years later, and I am optimistic that I will still remember it all, as fresh as if it was yesterday when we commemorate the 50th year after the Yom Kippur War. Perhaps I will be with Luis and David, perhaps I will sit and have coffee with Itzik, my newer brother-in-arms when I became a tank commander.

Te Salutamus: I salute you all, those who died and gave their lives, those who came home and survived their physical and emotional wounds, carrying them forever with them until their last breath on earth. I salute you and I honor you.