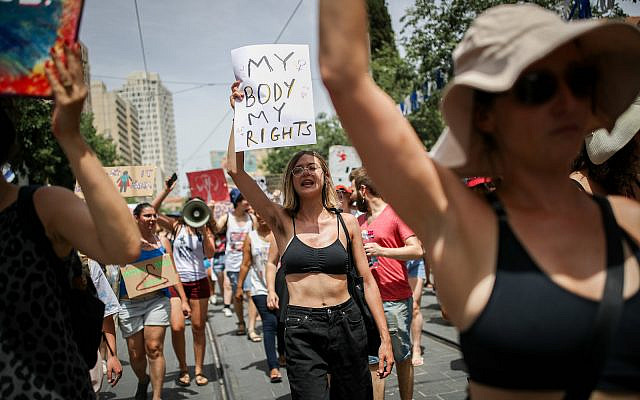 Israeli protesters chant slogans as they march in the SlutWalk in central Jerusalem, on May 24, 2019. The SlutWalk originated in Toronto in 2011, with subsequent rallies occurring globally, to protest against explaining or excusing rape by referring to a woman's appearance. (Yonatan Sindel/Flash90)

International Women’s Day is not a day that exists out of a need to celebrate femininity or any preconceived notions society may have impressed upon us as to what that entails.

International Women’s Day exists to remind us that there is a significant share of the population whose agency and personhood have historically been and continue to be undermined. That among us in our society are two kinds of people – those afforded full control over their own bodies, choices and opportunities, and those who have been systematically denied that control through cultural gender roles that have bombarded them from early childhood with endless messages, subliminal and explicit, of submissiveness and subordination.

We need International Women’s Day because the Israel Bar Association believes professional lawyers, who have fought and scraped alongside the rest of us to attain their positions, should be celebrated by being offered a seminar in which they are told how to dress to impress.

We need International Women’s Day because, when fundraising for women trapped by law in abusive marriages, the most common response I received from men was various forms of “but what about the men?”

We need International Women’s Day as long as the family of an adult rapist can attend the cross-examination of his 13-year-old victim and scream at her “SLUT!”, and still be allowed to show their faces in public. We need International Women’s Day when the judge fails to render a verdict in a case of a 12-year-old raped in coronavirus isolation because there are “still questions to be answered surrounding the consent” of the raped child.

We need International Women’s Day when the US can intern women in camps and perform forced sterilization operations without inviting a public outcry and international condemnation.

No, it’s not a day for celebration. Perhaps one day, this will be the day we look back and celebrate our successes in righting these wrongs, in achieving true gender parity in our society. Until then, it stands as a reminder of how much work remains to be done.