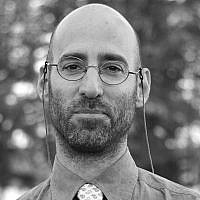 The Blogs
Ariel Brunner
Apply for a Blog
Advertisement
Please note that the posts on The Blogs are contributed by third parties. The opinions, facts and any media content in them are presented solely by the authors, and neither The Times of Israel nor its partners assume any responsibility for them. Please contact us in case of abuse. In case of abuse,
Report this post. 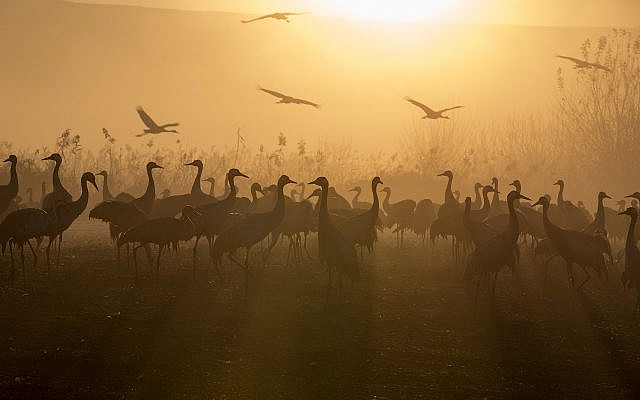 Sunrise at Agamon Hula during the crane migration (CC via Wikimedia)

Floods, droughts, storms, wildfires – hardly a week goes by without a major warning that human-induced climate change is rapidly getting out of hand and becoming the biggest threat to our continued existence on this beautiful planet. Less attention is being paid to climate change’s evil twin, the collapse of biodiversity and the breakdown of ecosystems. Our current mistreatment of the natural world, and our ever-increasing appetite for natural resources is literally killing the planet. Globally, one in eight bird species is threatened with extinction. Europe lost 57% of its common farmland birds in the past 40 years. Almost all Mediterranean fish populations are badly overfished. Insect biomass is collapsing even inside protected areas. Study after study paints a dark picture of life being snuffed out. Scientists talk about the sixth mass extinction. We’re doing to our current nature what the meteorite did to the world of the dinosaurs.

While the two crises have the same roots, solutions also intertwine. We urgently need to stop burning fossil fuels, while carefully planning green energy so that it doesn’t further harm ecosystems. But nature can be our best ally against climate change. Giving land and sea back to nature and helping it heal its wounds can bring back the beauty of wildlife and, more importantly, help life persist on our planet. But it can also directly help us slow down climate change and cope with its effects.

Healthy natural habitats like forests, grasslands and wetlands can store great quantities of carbon. They can retain water, thus mitigating both floods and droughts. Healthy native vegetation is usually much less inflammable than monoculture plantation forestry plantations. Coastal wetlands can protect the land from storm surges, while natural floodplains allow floods to dissipate without devastating the cities. Even those still seeing the world only in money terms are starting to pay attention. Ecosystem services, from crop pollination and water purification to flood protection and carbon are worth an estimated USD 125-140 trillion per year globally – more than one and a half times the size of the global economy.

Nature restoration is rapidly gaining traction, often under disparate banners such as “rewilding” or “nature-based solutions”. The UN has declared a “decade of ecosystem restoration”. The European Commission has just proposed a new, ground-breaking law that would set legally binding nature restoration targets throughout the EU. And large-scale initiatives are springing up everywhere. In the Scottish highlands, vast tracts of deforested and drained land are being restored to their ancient glory of native forest and water and carbon storing peatlands. In Belgium and the Netherlands, straightened and concrete cladded rivers are being allowed to flow free once again, and wildlife rich marshlands are recreated as a way to mitigate floods. A once overfished bay in Turkey has become a heaven for sharks, and for local fishermen who have seen their revenues increase fourfold since the ecosystem has been allowed to become productive again. In Georgia, NGOs are working with shepherds to halt desertification bringing back to health riverside forests and extensive steppe areas.

Israel is a small and overcrowded place. But the need and opportunities for nature conservation are as big as anywhere else. As a bird migration bottleneck, Israel serves as a highway for birds migrating between Eurasia and Africa. Every hectare of restored nature here would have benefits stretching from the Arctic to the Equator. Ever more studies are showing huge physical and mental health benefits of access to nature, and the more crowded the region the bigger the benefits. The Mediterranean climate has always had erratic rainfall swinging between too little and too much and has always been a fire hazard. These risks can, and will, increase with climate change. Rebuilding the “green infrastructure” should be as high up the national agenda as green tech. The scope for innovation, jobs and societal benefits is immense. SPNI, BirdLife’s Partner in Israel, and others have already launched some exciting pilot projects. What is needed is cooperation across stakeholders, both private and public, popular support and a sense of urgency and scale.

About the Author
Ariel Brunner is Deputy Director and Head of Policy with the environmental NGO BirdLife Europe and Central Asia. Based in Brussels, he is a member of the board of the Renewable Grid Initiative and, until recently, was a member of the EU Platform on sustainable Finances.