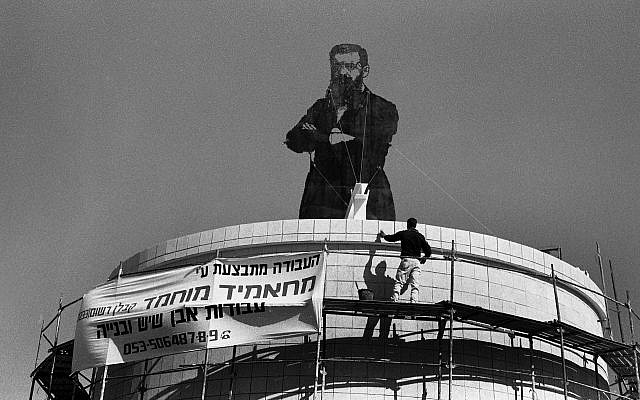 It’s not easy getting an interview with Theodor Herzl, but my request that he speak out on the 125th anniversary of the First Zionist Congress that ran from August 29-31, 1897 turned out to be an invitation he couldn’t resist. Our wide-ranging conversation — difficult as it was — contains important messages for today’s Israel on the eve of yet another election and for the more than 1,000 attendees from around the world gathering this week in Basel under the auspices of the World Zionist Organization (WZO), celebrating the decisive event at which it was founded. All the quotations below attributed to Herzl are authentic and taken from his various writings and speeches.

DB:  A momentous occasion. It was precisely 125 years ago today that you launched the movement that would bring into being the Jewish state you dreamed of. How would…

Herzl: Pardon me, what makes you think this is the Jewish state I dreamed of?

Herzl: More than a century ago I declared, “Those of us prepared to hazard our lives for the cause would regret having raised a finger if we were able to organize only a new social system and not a more righteous one.”

DB: We haven’t done that?

Herzl shook his head and launched into a diatribe about the inequalities in Israeli society today: the 2.5 million – nearly half of them children – living below the poverty line; the prejudice endured by our minorities, including not only those of other religions but also Jews of other colors; the plight of foreign workers and the threat of deportation looming over them and their children; the lower wages, glass ceilings and domestic violence with which women find themselves contending daily; the disproportionately lower budgets allocated for education and infrastructure in the Arab sector…

DB: But it was a state for the Jews you set out to establish.

Herzl: Yes, but from the very outset of the Zionist venture “I charged the Jewish people, ‘Fashion your state in such a manner that the stranger will feel comfortable among you’” and stated explicitly that “the Jewish people, upon reclamation of its ancient homeland, must extend civil, human, social and political rights to the people already in the land,” and in Altneuland, my novel portraying the society I expected would emerge from my efforts, “‘My friends and I do not differentiate between people. We do not ask a person to which race or religion he belongs. That one is human is all that matters to us.'”

DB: Uncomfortable with his admonishment I tried to change the subject. “But look at all that what we have managed to do. The technology, the desert in bloom…

Herzl: “All that you have cultivated will be worthless and your fields will again be barren unless you also cultivate freedom of thought and expression, generosity of spirit, and love for humanity. These are the things you must cherish and nurture,” was his retort, quoting the leaders of his Altneuland.

DB: I thought all you wanted was a safe haven for the Jewish people, where…

Herzl: My vision was much nobler. Just before my demise I wrote what would become my ethical legacy: “I truly believe that even after we possess our land, Zionism will not cease to be an ideal, for Zionism includes not only the yearning for a plot of promised land legally acquired for our weary people, but also the yearning for moral and spiritual fulfillment.” I expected a great deal more from you.

DB: Are you suggesting the Zionist undertaking was a failure? People from around the globe have gathered this week in Basle to celebrate its triumph. Would you have them go home deflated?

Herzl: God forbid! I may be disappointed, but I’m not a defeatist. This is not the time to forsake the ideal, but to embrace it, to inspire the next generation to take up the task of their forebears. I have said it before but I will say it again, “A community must have an ideal, for it is that which drives us. The ideal is for the community what bread and water are for the individual. And our Zionism, which led us hither and which will lead us still further to yet unknown heights, is but an ideal, an infinite endless ideal.”

DB: You believe we are capable of regaining that sense of vision?

Herzl: Might I remind you that on the occasion of the 100th anniversary of my death the WZO adopted a new Jerusalem Program, an up-to-date revision of my Zionist manifesto. It calls for “strengthening Israel as a Jewish, Zionist and democratic state and shaping it as an exemplary society with a unique moral and spiritual character, marked by mutual respect for the multi-faceted Jewish people, rooted in the vision of the prophets, striving for peace and contributing to the betterment of the world.”

DB: Do you believe we are capable of meeting the challenge?

Herzl: “All the deeds of man have begun with a dream, and dreams shall they become.”

DB: Was that an answer to my question?

Herzl: Look around you, all these accomplishments you take such pride in. A vibrant, full-color rendition of my black-and-white dream. But as deeds, they will ultimately amount to nothing if they do not become the foundation of dreams of your own.

DB: So where do we go from here?

Herzl: Convey the urgency of realizing the vision. Pick up from where Yitzhak Navon left off. I was deeply moved when I heard him echoing my words nearly half a century ago upon his election as Israel’s president: “Our society must be characterized by moral, social and humanitarian values. The vision of an exemplary society is not an aspiration to be relegated to some far-off utopian future, but a necessary condition for our survival.”

DB: But there are so many more immediate matters demanding our attention, security and…

Herzl: In the words with which I concluded my novel and with which I must conclude this interview, “if you do not wish it, all this that I have related to you is and will remain a fairytale.” The choice is yours, and so, too, the consequences.

With that he rose, readying himself once again to turn over in his grave, but not before adding a last request. Tell people to read my novel. Perhaps it will inspire them to navigate the distance from Altneuland to Tel Aviv, bringing your Israel just a bit closer to The Jewish State for which I convened the Zionist Congress in the first place, and for which I and so many others have sacrificed so much.

The foregoing is an abbreviated adaptation of a chapter appearing in the volume Herzl’s Vision Today, recently published by Carol Manheim/Artists Choice Editions. It is an anthology of insightful essays and original artwork reflecting on the ongoing relevancy of the dreams and ideals of Israel’s founding father. It is available from orders@gefenpublishing.com.

About the Author
Dr. David Breakstone is the Executive Director of the Yitzhak Navon Center for a Shared Society. He previously served as deputy chair of the Jewish Agency executive and the World Zionist Organization and as the conceptual architect and founding director of the Herzl Museum and Educational center in Jerusalem. He welcomes correspondence from those determined to forge Israel as the shared society it was always meant to be at breakstonedavid@gmail.com.
Related Topics
Related Posts