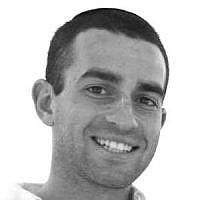 The Blogs
Akiva Berger
Apply for a Blog
Advertisement
Please note that the posts on The Blogs are contributed by third parties. The opinions, facts and any media content in them are presented solely by the authors, and neither The Times of Israel nor its partners assume any responsibility for them. Please contact us in case of abuse. In case of abuse,
Report this post.

On a personal level, the stabbing at the parade and the murder of an Arab baby have been quite perplexing. Are those who committed these evils extreme versions of a doctrine I subscribe to? Or perhaps my religious and Zionist relationship to Schlissel and Tag Mechir, are as circumstantial as our shared need for air and water?

My symptoms seem to be paradoxical. On the one hand, it causes me great pain to hear about a terror attack committed on Jews, to know that an innocent Jewish life has been lost due to hate. However when a Jew commits a terror attack and takes an innocent life, that pains me far more.

I don’t think I am alone in this reaction. The length of Facebook statuses, the amount of time the media deals with the issue and the amount of mental effort each one of us individually puts into contemplating an act of terror committed by a Jew, clearly places this as an issue of greater concern than that of a Jewish life that was taken.

And thus the paradox: Can we really say that someone who, motivated by hate, takes an innocent life, is of the same doctrine as those who prefer death to taking the life of the innocent?

But if they aren’t of our ilk, then why should we feel guilty? After all they are not an extreme version of our beliefs. They are a separate category — a different Zionism and a different religion — one that I would argue against as I would any other doctrine I believe is false.

In an article by Tracey Rich attempting to define “Judaism,” she asserts — basing herself on an idea by Rav Steinsaltz[1] — that “Judaism” is not a religion, race or nationality, but rather a family:

Like a family, we don’t always agree with each other. We often argue and criticize each other. We hold each other to the very highest standards, knowing that the shortcomings of any member of the family will be held against all of us. But when someone outside of the family unfairly criticizes a family member or the family as a whole, we are quick to join together in opposition to that unfair criticism.

When members of our “family” suffer or are persecuted, we all feel their pain. For example, in the 1980s, when Africa was suffering from droughts and famines, many Jews around the world learned for the first time about the Beta Israel, the Jews of Ethiopia. Their religion, race and culture are quite different from ours, and we had not even known that they existed before the famine. And yet, our hearts went out to them as our fellow Jews during this period of famine, like distant cousins we had never met, and Jews from around the world helped them to emigrate to Israel.

When a member of our “family” does something illegal, immoral or shameful, we all feel the shame, and we all feel that it reflects on us. As Jews, many of us were embarrassed by the scandals of Monica Lewinsky, Jack Abramoff and Bernie Madoff, because they are Jews and their actions reflect on us all, even though we disapprove. The Madoff scandal was all the more embarrassing, because so many of his victims were Jews and Jewish charities: a Jew robbing from our own “family” We were shocked when Israeli Prime Minister Yitzchak Rabin was killed by a Jew, unable to believe that one Jew would ever kill another member of the “family.”

To an extent, I feel that there is truth in this idea, the idea that we feel shame by association when one of our “family” members commits a crime. But that’s just it, that’s what we share, an inherent sense of mutual responsibility that transcends a shared belief or way of life. This isn’t a matter of Zionism as an “ism” failing, neither is this the fault of Judaism as an “ism”. It may very well be due to poor upbringing, but it is not my upbringing, nor my doctrine, nor my belief.

And in this way, I feel the paradox is solved. It makes perfect sense for us to feel guilty for the actions of these evil “family members”, even as it is not the case that we have this version of evil within us, but to a lesser lighter extent.

This isn’t to say that these incidents aren’t an appropriate time for personal introspection; it is a perfect time for that. But only as they serve as reminders that there is still much evil in the world; not as an implication that we are evil.

[1] See the third essay in his 2005 book, We Jews: Who Are We and What Should We Do. Taken from http://www.jewfaq.org/judaism.htm

About the Author
Akiva Berger is a researcher of educational technology at Tel Aviv University. His main focus is on online student teacher relationships, and Jewish education.
Comments