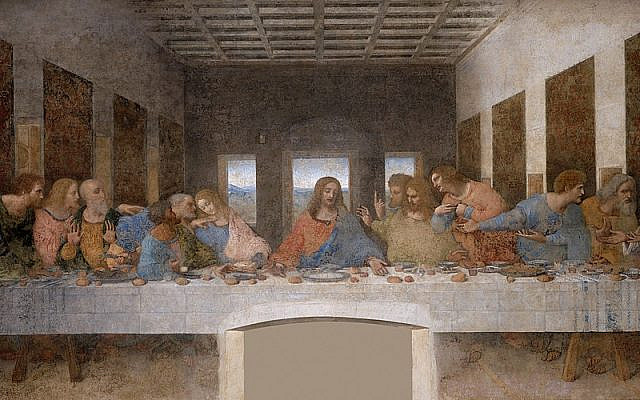 The Last Supper by Leonardo da Vinci (1452–1519) (WIKIPEDIA/Collection : Santa Maria delle Grazie/ Attribution-ShareAlike 4.0 International (CC BY-SA 4.0) https://creativecommons.org/licenses/by-sa/4.0/legalcode)
It has been one of our wise traditions that when the Church has theological arguments, we keep our heads well down. On the other hand, if we can settle a current argument for them, it can’t do any harm.
The discussion they are having today is on the skin colour of Jesus. Different Christian communities around the world claim Jesus as one of their own and of their colour. Now with great respect to the hundreds of millions of people involved, there really isn’t any historical argument about this at all. Jesus was Jewish.
It may have been a virgin birth, but nobody is suggesting that Mary, the mother of Jesus, was anything but Jewish, and that makes him Jewish too. Now while there are blonde Jews and black Jews today, in biblical times it is pretty well certain Jesus looked like a Jew. He may have escaped our Roman nose, but the mohel would not have wondered why he was yellow or black.
A first class artist is producing a painting at the moment with Jesus portrayed as black at the Last Supper. It’s copied from Leonardo. da Vinci’s masterpiece.
Now the Last Supper was, of course, Seder night, but as a historical record, da Vinci’s work gets nought out of ten for research. I mean, to start with, none of the Disciples is wearing a yarmulkah. Whether the picture captures the supper or the service, a yarmulke is de rigueur.  Also there’s no shank bone on the table and it looks like bread to me rather than matzo.
Today’s artist could also make the painting more authentic by seeing that there was some spilt wine, because it always does get spilt at some point. I can’t see Elijah’s glass either, but they might have been worried that he would be de trop if he had appeared.
Now there was nothing to stop Leonardo getting it right. He was living in Milan at the time and there was certainly a Jewish community in the city when he painted it. There were Jews in Italy continuously from Roman times and in 1452 the community had paid the Pope a small fortune for permission to build synagogues. They still had to wear a yellow badge, but Milan was even then a very important trading city, so we’d be there in considerable numbers.
It is, of course, a mitzvah to invite strangers to your seder table. As Leonardo was the illegitimate son of a lawyer, there might well have been some mishpocha around as well.  So all he he had to do was ask, and he could have seen the Last Supper at first hand.
It’s  an artist doing a painting rather than a TV programme, so this at least gets over the problem of the dialogue. The Ecclesiastical language of the Catholic Church to this day is Latin, but there can be no doubt at all that Jesus prayed in Hebrew. You didn’t find the Shema and the Amidah translated into Latin in the Temple. The Sermon on the Mount would have been in Hebrew as well, or possibly Aramaic, which was the language of the common people. It would not have been Latin.
Of course, there is one more problem; Leonardo might not have spoken Yiddish and, therefore, answering any questions he might have had could have been difficult. There are few prayers as powerful as Chad Gadya. Ein kind, ein kind, vus mein tota ob verkoyft fur zvei zuzim. My dad, oove shalom, always recited that in memory of his parents.
About the Author
Derek is an author & former editor of the Jewish Year Book
Comments