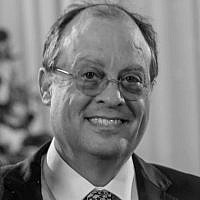 The Blogs
Moshe Raab
Apply for a Blog
Please note that the posts on The Blogs are contributed by third parties. The opinions, facts and any media content in them are presented solely by the authors, and neither The Times of Israel nor its partners assume any responsibility for them. Please contact us in case of abuse. In case of abuse,
Report this post.

Once again, I have a feeling of revulsion and disgust. Perhaps worse than before.

The University of Hawaii is hosting a virtual event on October 23rd entitled “We Will Not Be Silenced: The Case of Khaled and Solidarity from Hawaii to Palestine.” Well-known terrorist Leila Khaled herself is slated to make a special appearance!

This event is in reaction to a previous event that was prevented from taking place at San Francisco State University in September. Once protests were voiced (see mine here), Zoom, Facebook, and YouTube correctly prevented their platforms from being used to promote terrorism.

To review, since the University of Hawaii seemed to have forgotten (or disregarded), Ms. Khaled is a terrorist. She does not deny that she is a member of a terrorist organization, Popular Front for the Liberation of Palestine, nor that she successfully hijacked a TWA plane in 1969, but failed in her attempt to hijack an El Al plane in 1970.

I was on one of the planes that was successfully hijacked on September 6, 1970, by terrorist Khaled’s cohorts in the PFLP. My mother, brothers, and sister, along with 120 other passengers were held hostage on a TWA plane in the Jordanian desert for a week. That month became known as Black September.

Is this with whom the University of Hawaii, is standing in solidarity?

Does the University of Hawaii truly believe that these technology companies erred in preventing their platforms from being used to promote terrorism and terrorist ideas?

Even after 50 years, terrorist Leila Khaled is proud of her violent, anarchistic, anti-Semitic and terrorist history. Of course, she has never expressed remorse or disavowed her actions or those of her comrades.

Is this with whom the university, is standing in solidarity?

Is this with whom the University is standing in solidarity?

University of Hawaii spokesman Daniel Meisenzahl said “The University of Hawaii is an institution where controversial viewpoints can be peacefully and openly considered and discussed. The sharing and debate of diverse and difficult ideas and opinions is fundamental to the mission of higher education in our society.”

I would like to point out to the University and Mr. Meisenzahl that her talk will be using University resources to support a well-known terrorist. Providing material support to terrorists can lead to a fine or imprisonment for up to 15 years, or both; and, if the death of any person results it can lead to imprisonment for any term including life[1].

I would also ask, who is financing this? Prohibitions against the financing of terrorism call for a fine or imprisonment for up to 20 years.

I would point out to the University and Mr. Meisenzahl that terrorist Khaled is not presenting just a “difficult idea or opinion.” Terrorist Leila Khaled is a metaphor for continued Palestinian rejection of the State of Israel and for wanton terrorism and death.

Would the university also countenance an invitation to convicted scammers to give financial advice? Convicted rapists for dating advice? Or convicted sexual predators on advice for aspiring actresses?

I would also like to ask Mr. Meisenzahl when will the other ideas, such as peaceful protest, coexistence, support for Zionism, be shared and debated in the university?

I fail to understand how any rational, compassionate person is capable of embracing someone who is so evil that justifies the maiming or killing innocent people in the name of her “cause.” I will remind the reader that she pulled the pin out of a grenade and tossed it down the aisle of an airplane while in flight.

Would she justify and would the University of Hawaii, stand in solidarity with a someone that would walk into terrorist Khaled’s house, pull the pin and then toss a grenade in her living room filled with her friends and family?

One would think that intelligent academics and students would be able to discern between a legitimate exchange and discussion of ideas and one that encourages and glorifies murdering innocent people.

Are our tax dollars funding these institutions and universities that are teaching our next generation of leaders to justify and stand in solidarity with terrorists, present them as role models to be emulated and thus encourage these actions? Will this improve our country and the world?

I am sure that I speak for many who feel that the university’s excuse is a copout. It is time for Americans to speak out and for the universities to actually teach our students critical thought, right from wrong, and how to be productive and not destructive citizens and leaders.

Or are terrorist Khaled’s actions justified and deserving of solidarity when her victims are Jews and Israelis?

About the Author
Moshe Raab is a software consultant who lives in Maale Adumim, Israel with his wife of 41 years. Along with his mother and four siblings, he was aboard a plane that was hijacked by the PFLP on September 6, 1970.
Comments