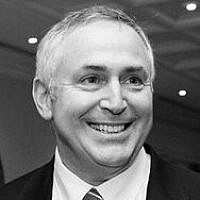 The Blogs
Marc R. Stanley
Apply for a Blog
Advertisement
Please note that the posts on The Blogs are contributed by third parties. The opinions, facts and any media content in them are presented solely by the authors, and neither The Times of Israel nor its partners assume any responsibility for them. Please contact us in case of abuse. In case of abuse,
Report this post.

As thousands of pro-Israel activists converge on Washington,DC this weekend as part of AIPAC’s Policy Conference, it is important to recognize that President Barack Obama’s record reflects much of the pro-Israel community’s agenda.

President Obama has steadfastly stood by Israel and strengthened the U.S.-Israel relationship in many different ways. From defending Israel’s legitimacy to leading the sanctions movement against Iran, President Obama has been a true friend of Israel — and he deserves our thanks and praise. There is no greater example of our President’s commitment to Israel than in the defense assistance he has provided.

Despite smaller budgets and tougher opposition to foreign aid, President Obama has ensured that Israel’s annual aid of $3 billion per year is allocated to provide Israel the latest and most efficient technologies and weapons available. Over the past four years, the U.S. has provided $11.4 billion in foreign aid to ensure Israel maintains its Qualitative Military Edge (QME) — which President Obama promptly restored after the Bush Administration let it lapse. The unprecedented level of cooperation, including 27 meetings and calls between President Obama and Prime Minister Netanyahu, has resulted in remarkable achievements.

During Operation Pillar of Defense, when Israel was besieged by Hamas’ rocket attacks, the expedited $275 million in supplemental funding for the Iron Dome helped ensure the safety of Israeli citizens. Iron Dome intercepted 85% of the rockets threatening Israeli citizens and has been praised by Israel’s leaders for its “exceptional” success at saving the lives of Israelis who live within rocket range. Israeli Ambassador to the United States Michael Oren has effusively thanked the President for his support and even wrote that the system has revolutionized Israel’s defense strategy.

Iron Dome, Arrow, and the David’s Sling missile systems will create a multi-layered missile defense shield for the Jewish state. The pro-Israel community is a clear proponent of funding these essential programs — and President Obama has more than delivered. In fact, the $650 million in supplemental funding to Israel for missile defense from the Obama Administration is more than double the amount spent by the Bush Administration.

President Obama has also helped Israel by signing the U.S.-Israel Enhanced Security Act, which has increased Israel’s QME and augmented the already record-breaking level of military cooperation between the U.S.and Israel. Defense Minister and former Prime Minister Ehud Barak said of President Obama, “I should tell you honestly that this Administration under President Obama is doing in regard to our security more than anything that I can remember in the past.”

The President has also carried the pro-Israel community’s agenda into the diplomatic arena.

When Israel’s legitimacy has been attacked, President Obama and his Administration have provided unparalleled diplomatic support to defend Israel. He personally opposed the Palestinians’ attempt to unilaterally declare a state, and the United States led the opposition to their UN status upgrade. President Obama stood by Israel against the biased anti-Israel Goldstone Report and against the Gaza flotilla. His UN Ambassador Susan Rice has even been honored for her work to defend Israel in UN bodies with a 100% pro-Israel voting record.

President Obama has rallied the world against a nuclear armed Iran and made stopping Iran’s nuclear weapons program a cornerstone of his foreign policy. In his own words, “Iran’s leaders should understand that I do not have a policy of containment; I have a policy to prevent Iran from obtaining a nuclear weapon.” President Obama’s multifaceted approach has been crucial to forging and strengthening global consensus against the dangers of a nuclear-armed Iran, leading to stricter sanctions from the UN Security Council, the European Union, Canada, Australia and other countries. He has also signed executive orders that effectively cut off Iran’s central bank from the global economy and block the country’s oil exports.

The six Iran sanctions bills and executive orders signed by President Obama have prevented Iran from accessing key technologies it needs for its nuclear program. The sanctions have resulted in a 40% decline in oil exports and sales leaving Iran’s oil production at its lowest point in 20 years, as well as a 50% decline in the value of Iran’s currency. As Israeli President Shimon Peres said one year ago, “The United States and Israel share the same goal — to prevent Iran from developing a nuclear weapon. There is no space between us.”

With AIPAC’s Policy Conference starting this weekend, the pro-Israel community should give credit to the Obama Administration for their dedication to the U.S.-Israel relationship. Many of those who challenge President Obama’s dedication to Israel are not doing so to support Israel, they’re doing it for their own political gain. But when the President is judged by his accomplishments — a by-the-numbers breakdown — his pro-Israel record certainly measures up.

About the Author
Marc Stanley, a Texas-based attorney, is former chair of the National Jewish Democratic Council (NJDC).
Comments