In a few weeks’ time Jewish families will be sitting around the Passover Seder table, reciting the popular song “Dayenu”:

Friends of Israel applauded enthusiastically on Sunday when they heard President Barack Obama’s rendition of “Dayenu” at the AIPAC Policy Conference in Washington. Israeli media pundits declared him a haver, a term for a close friend that has not been used since President Bill Clinton’s eulogy for Yitzhak Rabin.

The president’s list of good deeds for Israel included his policies of solidarity with Israel at the UN, joint military exercises and training, a commitment to maintain Israel’s qualitative military edge, funding of the Iron Dome anti-rocket system, challenging the Goldstone Report, and more. Oh, and holding a White House Passover Seder for young staffers.

The climax of President Obama’s “Dayenu” was a promise to “prevent Iran from obtaining a nuclear weapon.” In fact, 10 times in his speech the President referred to preventing the ominous “nuclear weapon.”

As a former speechwriter for American and Israeli political leaders, I found the constant repetition of the phrase “nuclear weapon” to be both calming and curious. The president elaborated on the threat of a weapon – to Israel, the Middle East, US interests and world peace.

But a speechwriter tries to give some variety to his words, and Obama’s writers stuck with the phrase “nuclear weapons” throughout the address, receiving tumultuous applause and the kudos of Israel’s media analysts. 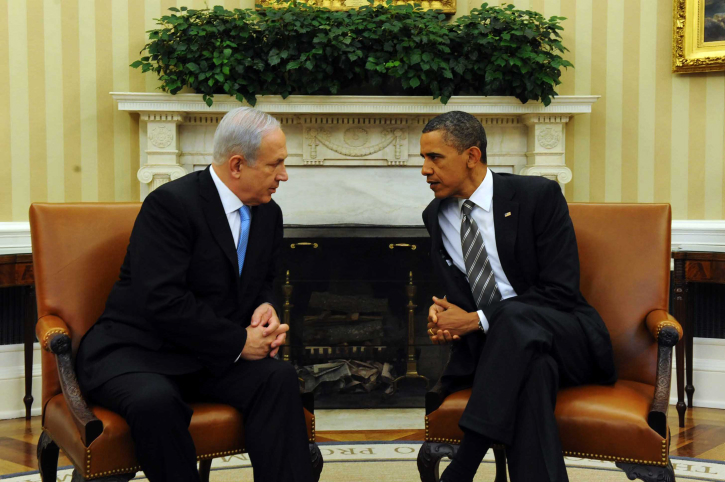 Keeping all the options on the Seder table? Obama and Netanyahu during a previous meeting. (photo credit: Avi Ohayon/Government Press Office/FLASH90)

Was it just a rhetorical tool to repeat the phrase? Or was it a policy decision to limit American reaction only to the final act of a “obtaining a nuclear weapon?” That happens when the model is finally rolled out, put on the display floor, and the Iranian National Guard figuratively kicks the tires and is handed the key.

But there are many – too many — Iranian actions leading up to the final assembly and the ”obtaining” of the Iranian nuclear weapon: the building of long-range missiles and launchers, the development of precision guidance systems, the acquisition of the right alloys for the missiles, the preparing of computer programs to test the timing devices on the warheads, acquisition of the precision switches for the weapon detonation, switching the missiles from liquid fuel systems to the faster-on-the-draw solid fuel systems, the engineering and tooling of the shaped charges that will start a nuclear chain reaction, and of course the continued enrichment of uranium to weapons-grade materiel.

Perhaps that’s why President Obama didn’t add other phrases to describe the Iranian threat. He never voiced opposition to a “nuclear Iran,” or to “Iran’s nuclear capability,” or to “Iran’s uranium enrichment program.”

Was the absence of these phrases a way of defining American policy? Read what the head of the pro-Iranian lobby in Washington, Trita Parsi, said after the speech:

The President stood firm behind weaponization rather than weapons capability as the red line. The President said: “I have said that when it comes to preventing Iran from obtaining a nuclear weapon (emphasis added by Parsi), I will take no options off the table, and I mean what I say.” …Critically, Obama’s rejection of containment at AIPAC was in the context of containing a nuclear-armed Iran; not a nuclear-capable Iran.

So let’s be a little cautious in our praise of the policies of Israel’s new haver. Presumably, Prime Minister Netanyahu will raise this when he meets Obama at the White House on Monday. After all, Israel doesn’t want the next Passover verse it’s serenaded with to be the stanza from “Had Gadya” about the Angel of Death.