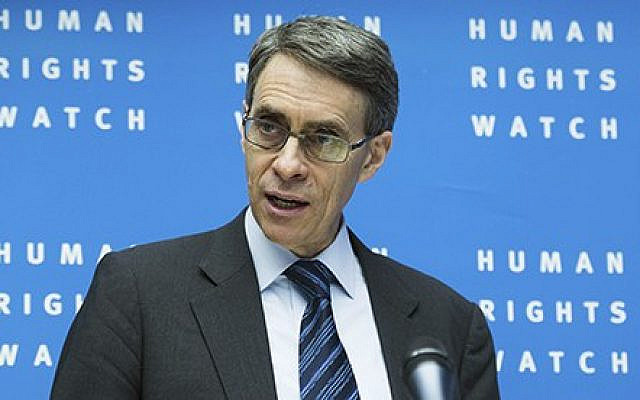 A new study by UN Watch over an 18-month period shows that Ken Roth, the influential head of Human Rights Watch, devoted more than 70% of his tweets alleging illegality to the criticism of one single country: Israel. By contrast, Roth devoted only 1% of his tweets to accusing Iraq, Libya, Russia, Syria or Yemen of illegal actions, according to an examination of his tweets from January 1, 2017 to June 2018.

In addition, a similar examination of Roth’s tweets over the past two months shows that, in November and December 2019,  out of 57 tweets where Roth accused a country of “illegal” actions, 50 of them, or 88 percent, targeted Israel. However, in that same month, Roth tweeted one similar accusation each on the U.S., Lebanon, Turkey and Brazil. In other words, in tweets employing the “illegal” accusation, the ratio of Roth tweets on Israel and Turkey was 50 to 1.

In November 2019 alone, out of 42 tweets in which Ken Roth accused a country of “illegal” actions, 39 of them — being 93 percent — targeted Israel. Roth tweeted one similar accusation each on Bolivia, Brazil and Indonesia.

In the same 2-month period in 2019, despite widespread and systematic acts of oppression by the world’s worst regimes, in violation of international human rights law including the International Covenant on Civil and Political Rights, Roth failed to tweet any such accusation against China, Russia, Syria, Iran, North Korea, Iraq,  Cuba, the Palestinian Authority, Myanmar,  Pakistan or Venezuela.

The methodology of the study was a search of the term “illegal” in Ken Roth’s twitter feed, and then a count of every instance in which he accused a country of illegal actions.