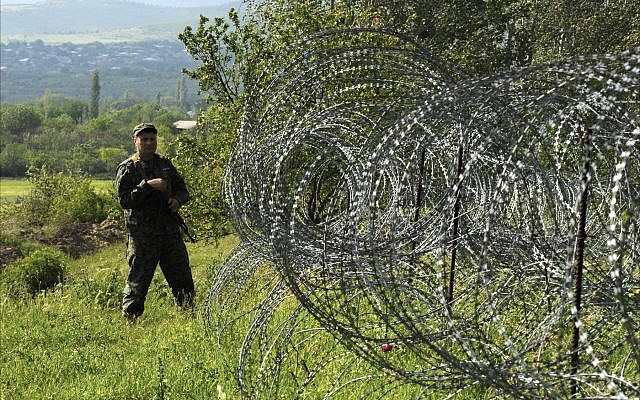 The 2008 Russo-Georgian War, which raged from August 7 to August 12, was considered the first European war of the 21st century. It killed 412 soldiers and civilians on the Georgian side, as well as 67 Russian and South Ossetian servicemen and civilians, according to an official EU fact-finding report about the conflict.

In addition, the war displaced an estimated 192,000 people, leaving Russia in control of Abkhazia and South Ossetia, in violation of the ceasefire agreement of August 2008 — and a wellspring of bitterness that remains to this day. 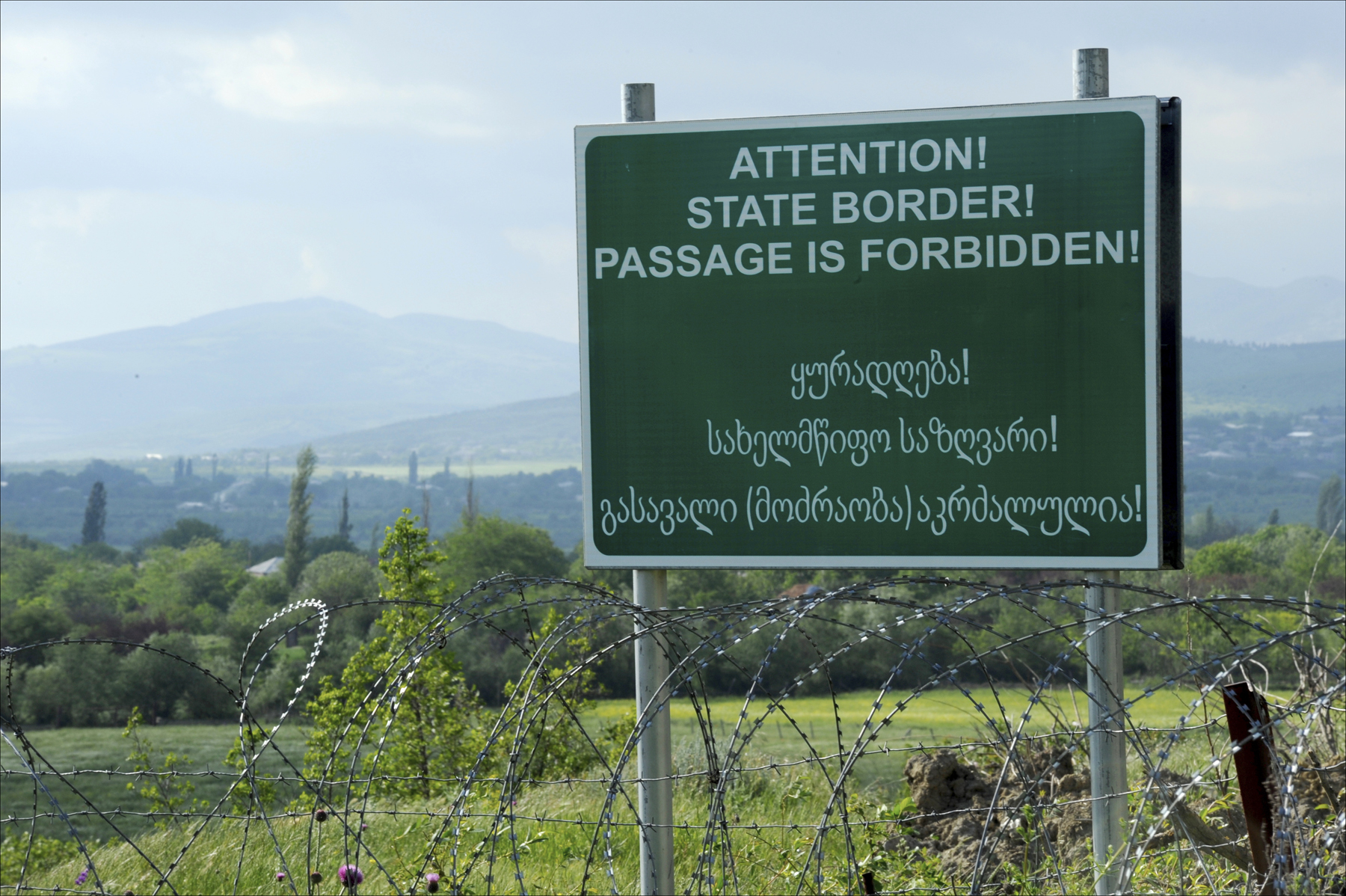 I saw that with my own eyes during a recent visit to this mountainous republic in the Caucasus.

Accompanied by a spokeswoman with the State Security Service of Georgia, I traveled under military escort to Tskhinvali — a town about 70 kilometers from Tbilisi, the capital, and only five kilometers from the main highway. As traffic zoomed by, modern shopping centers gradually gave way to little villages and then crumbling huts.

Then the dirt road on which we were traveling ended abruptly. There, looming ahead, was an expanse of barbed wire stretching 51 kilometers into the distance. 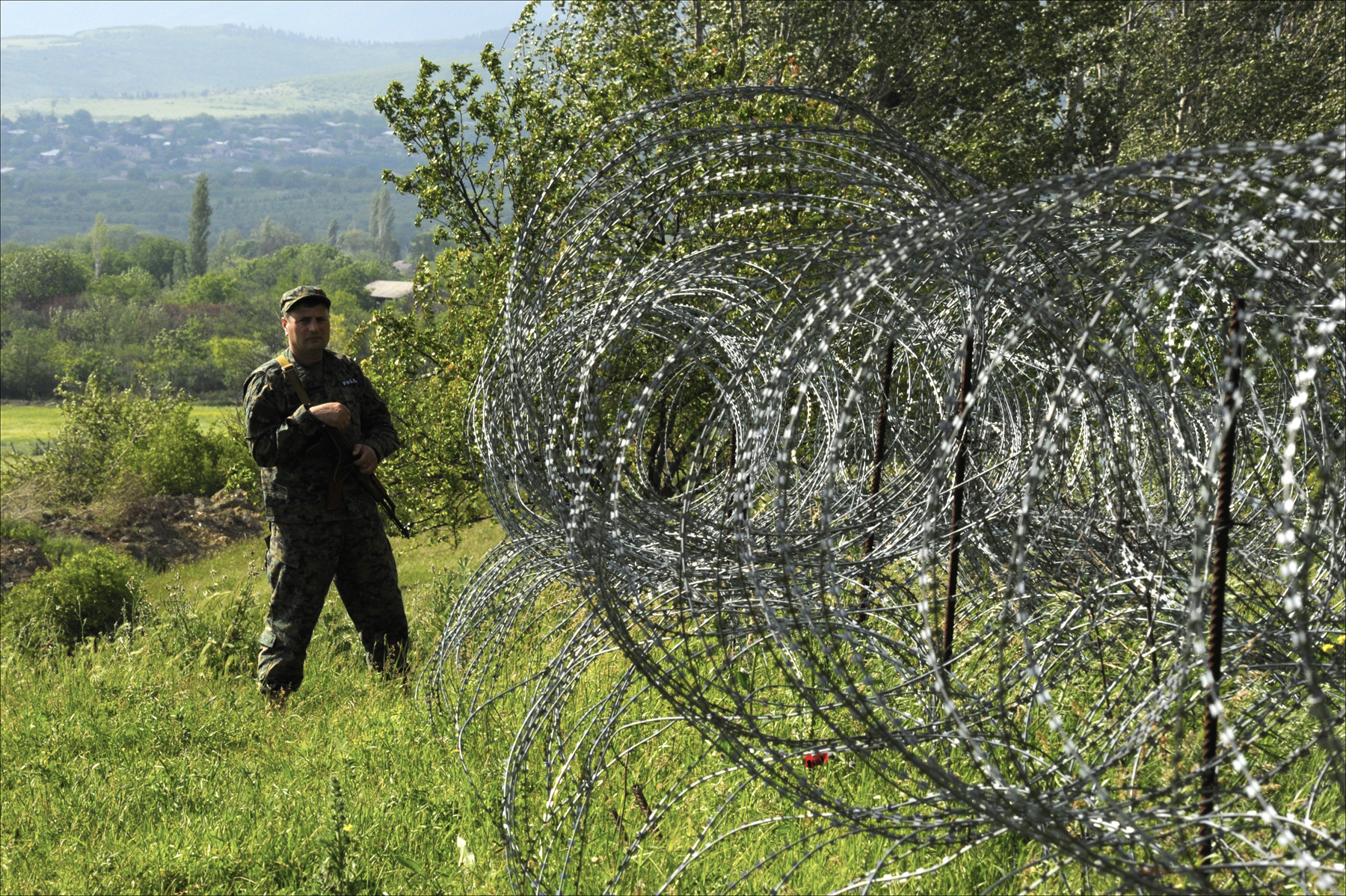 This was the de facto “administrative border” thrown up by Russian troops in 2011 to separate Georgia from the self-declared republic of South Ossetia. I quickly gathered my camera bag and clambered down an embankment.

The spokeswoman, mindful of the nearby threat, warned me not to photograph Russian soldiers on the other side — or venture too close to the enormous bilingual sign declaring this to be a “border” in the first place.

“Our main challenge is the presence of Russian military forces within the Tskhinvali region,” she said, pointing to a map for greater emphasis. “There are 19 Russian FSB bases along the occupation line. They detain locals who are living in the occupied region and want to have communication with family members.” 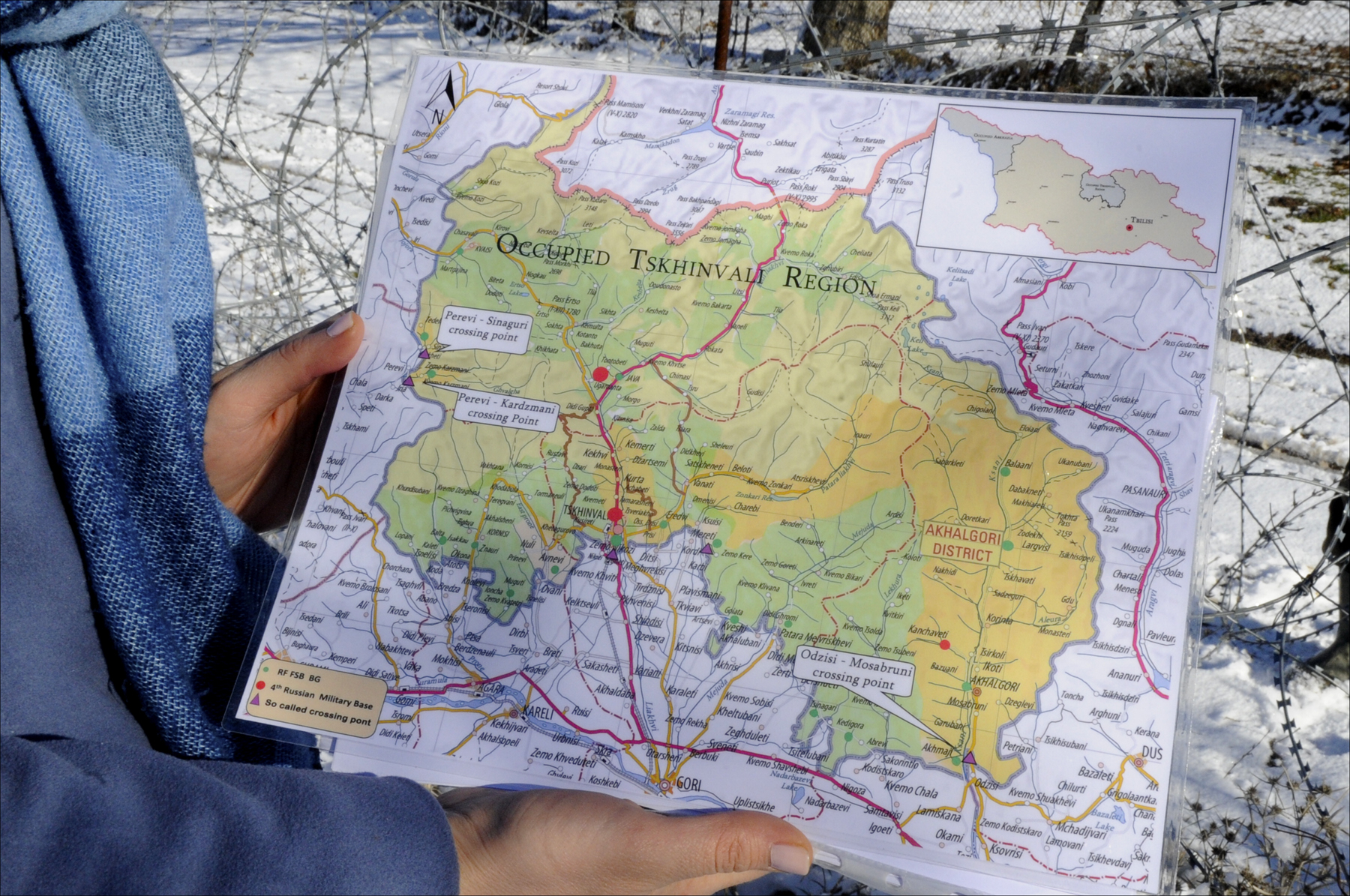 A government spokeswoman shows visitors a map of Georgia’s Tskhinvali region, which has been occupied by Russian troops since 2008. (Larry Luxner)

Before the 2008 war, South Ossetia was home to 60,000 people, while the larger region of Abkhazia, situated to the west, hosted 550,000 inhabitants. Together, the two regions comprised 20 percent of Georgia’s total land area.

“Today, according to our estimate, 20,000 to 25,000 people live in the occupied Tskhinvali region,” said the spokeswoman, noting that only Russia, Syria, Venezuela and the tiny Pacific island of Nauru have officially recognized South Ossetia’s sovereignty. “For us, this is not an independent country but an occupied region.”

On July 17, Georgia’s ambassador in Washington, David Bakradze, testified at a hearing of the U.S. Helsinki Commission on the worsening situation in both Abhkazia and South Ossetia. 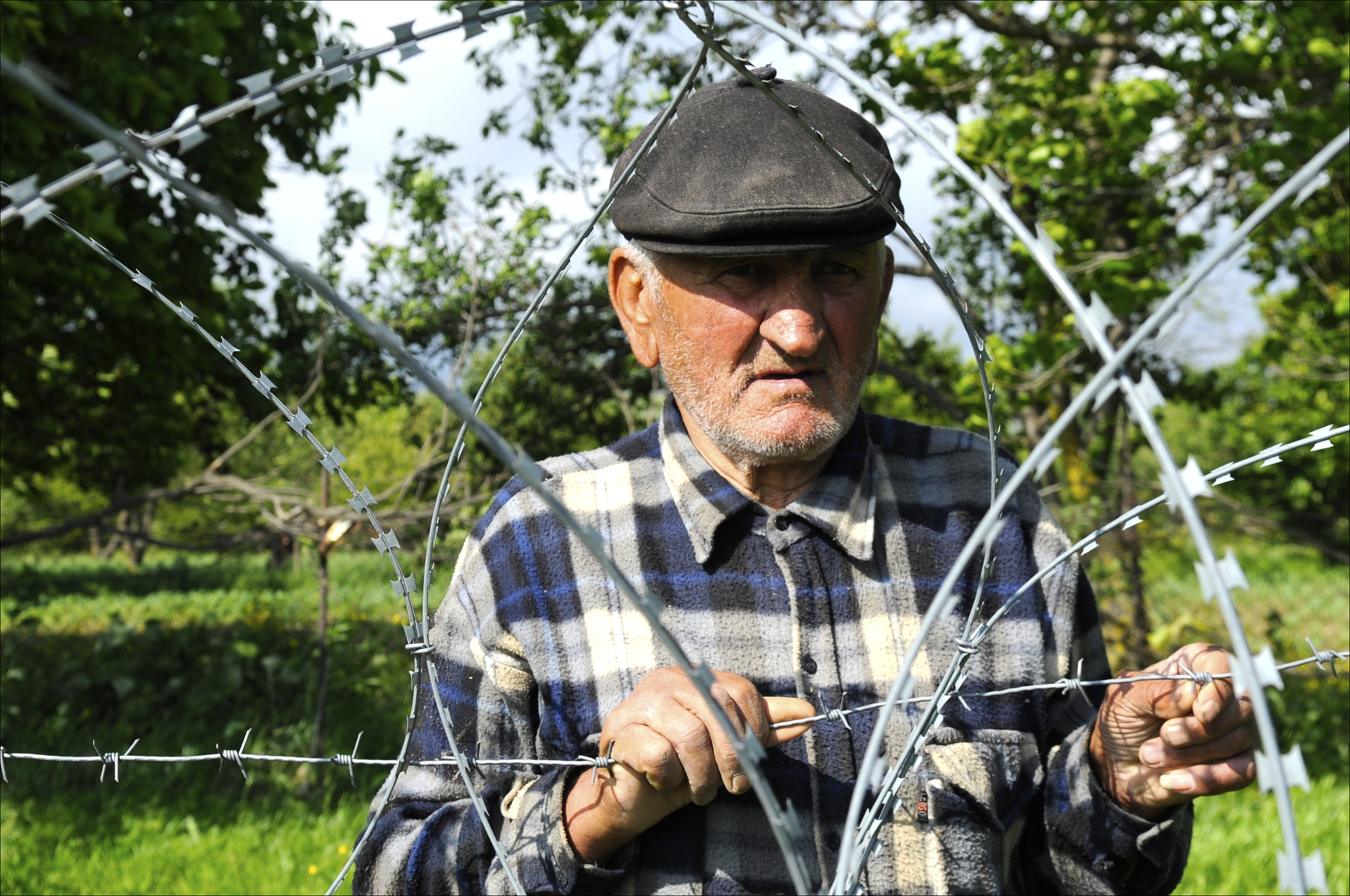 David Vanishvili, 85, talks about his plight as a Georgian farmer divided from his land by Russia’s barbed-wire “border fence.” (Larry Luxner)

“The human rights situation remains alarming, with fundamental rights of the local population infringed on a daily basis in the occupied region,” Bakradze told Congress. “Against the backdrop of intensified ethnic discrimination, restrictions on free movement, illegal detentions and kidnappings, deprivation of property rights, prohibition of education in the native language and other ethnically based violations, the local population is deprived of minimal safeguards for their lives.”

David Vanishvili certainly doesn’t need a politician to tell him that.

A lifelong resident of Tskhinvali, the 85-year-old farmer is today virtually a prisoner in his own village, which has been isolated by the barbed-wire barrier. 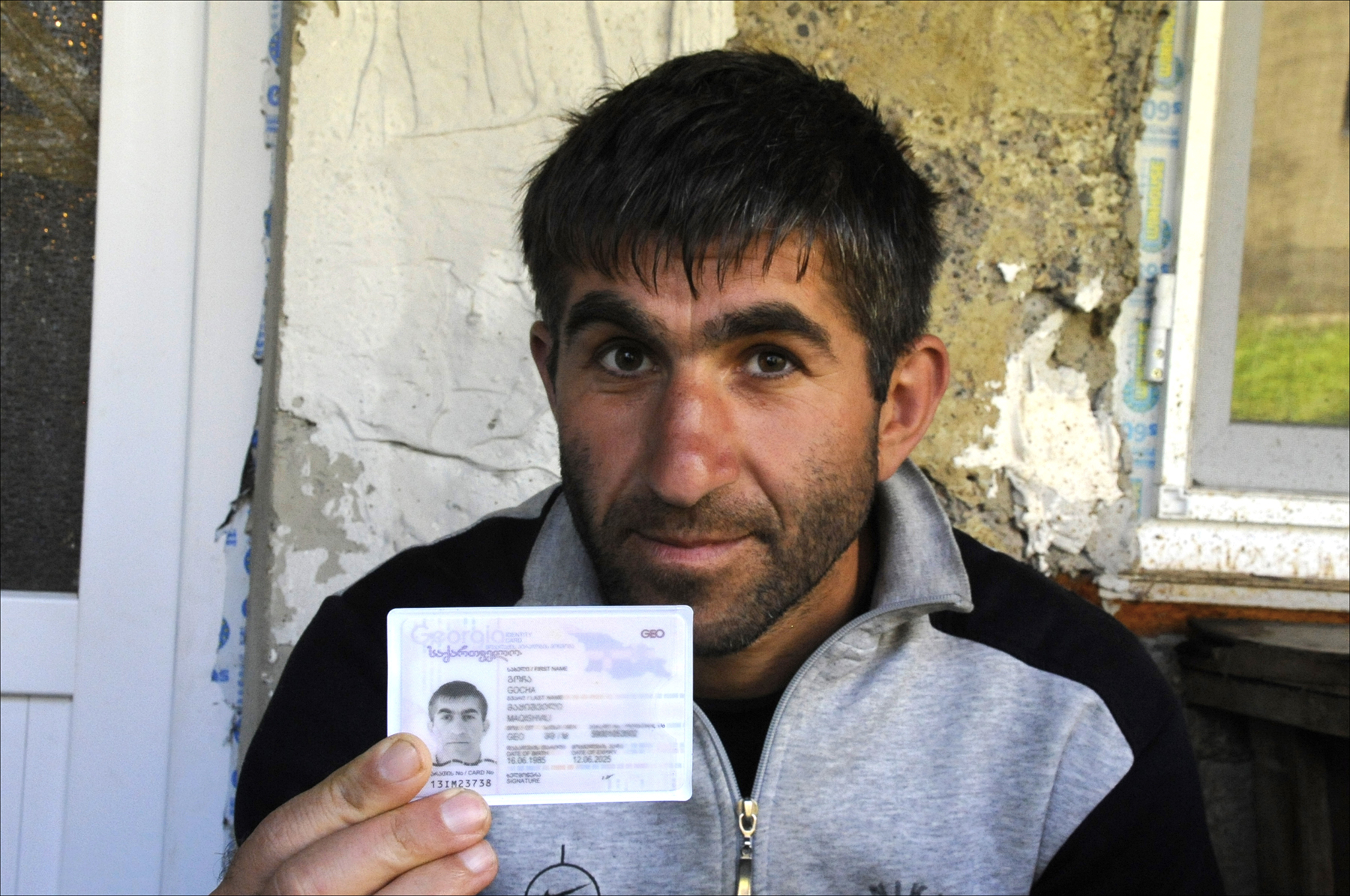 Gocha Makishvili, who was detained by the Russians and freed only after paying a bribe, displays his Georgian identification card. (Larry Luxner)

“I cannot even buy bread,” he shouted from the other side. As our guide translated the old man’s words into English, a golden retriever rolled in the grass nearby. “I’m hungry. I don’t have Russian money from over there, or Georgian money from here. Kind people who know my situation pass me food through the fence.”

Not far away, a young man named Gocha Makishvili explained matter-of-factly how he was collecting firewood in the fall of 2012 when a Russian soldier with an attack dog detained him in his own backyard.

“They told me I had crossed the border illegally,” said Makishvili, who looks far older than the 33 years listed on his government-issued ID. The Russians forced him into a car and took him to an FSB station in Ghduleti, less than one kilometer away. They kept him there for three days, roughed him up and freed him only after his family paid 2,000 rubles (about $30). 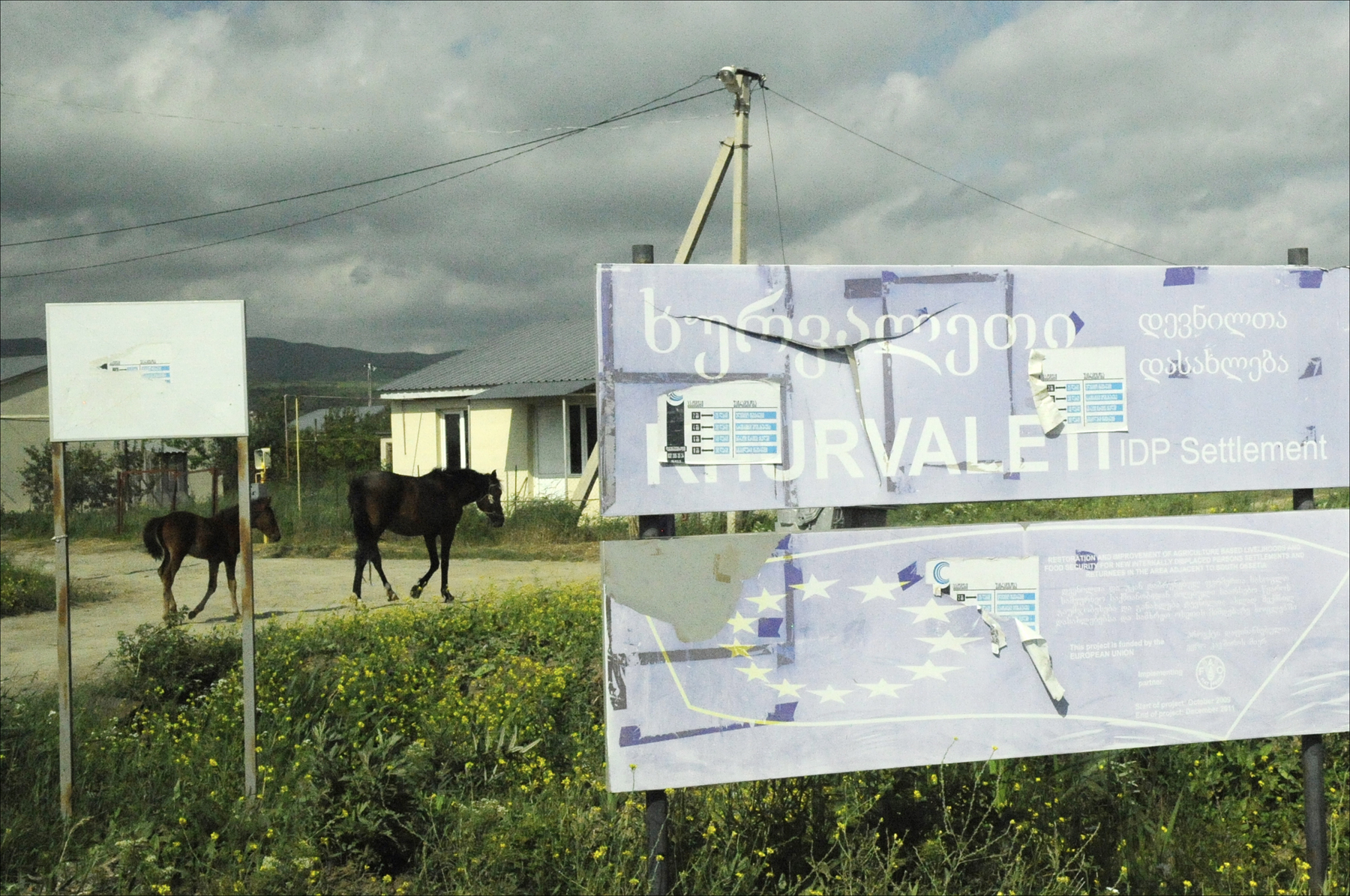 This settlement in Khurvaleti for internally displaced persons (IDPs) made homeless by the 2008 war in Georgia is funded by a grant from the European Union. (Larry Luxner)

Last year, Georgian authorities detected 106 Russian military drills in occupied Abkhazia, up from 84 in 2016 and 52 the year before. In the Tskhinvali region, the numbers remained relatively stagnant: 27 drills last year, 36 in 2016 and 34 in 2015.

This past February, Russian troops detained three Georgian citizens in Akhalgori. One of them, Archil Tatunashvili, died while in detention in unclear circumstances. The man’s family believes Tatunashvili was tortured; South Ossetian officials claim he died of heart failure. The other two men were released, minus their ID or transport documents; as a result, they still cannot leave the occupied region.

The U.S. Embassy in Tbilisi issued a statement offering condolences and demanded that Russian officials offer “a full accounting of the circumstances of this tragic incident.” 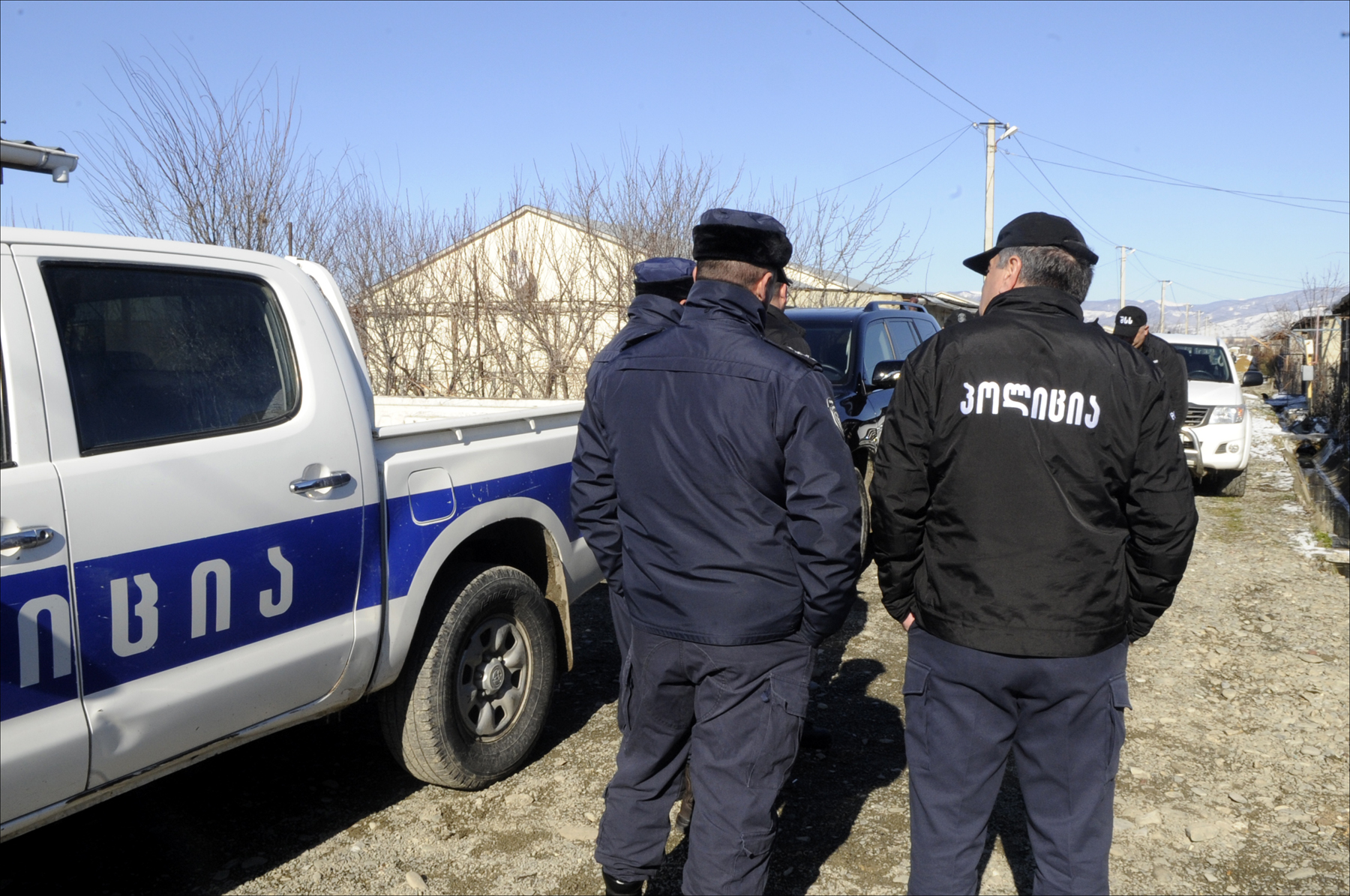 Yet it’s not the first such incident. In 2016, a Russian soldier in the Abkhazia region shot and killed a Georgian citizen, Giga Otkhorozia, on the so-called border line. The separatist regime refused to hand over the accused soldier to Georgian authorities.

“They’ve created a so-called crossing point for the locals who are living within the occupied region to prevent them from crossing That’s why they installed a barbed-wire fence,” said the spokeswoman, who declined to be identified. “If they don’t have documents, they can’t cross.”

That occupation line is only 450 meters from the main E-60 highway — close enough to see in some places. 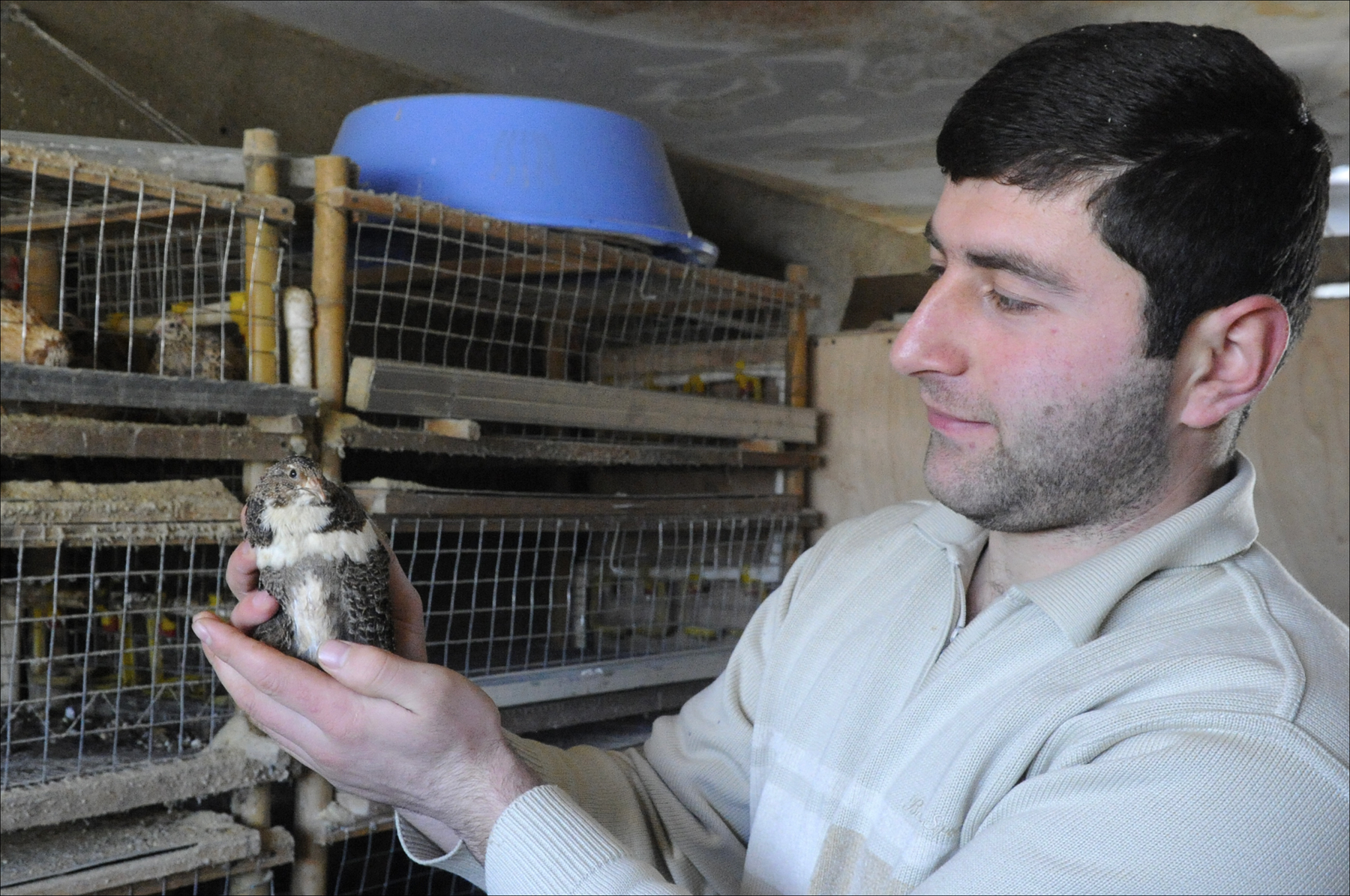 Along the dirt road, a sign notes the presence of the U.S. Agency for International Development, which is helping local authorities settle internally displaced persons (known as IDPs). The 2008 conflict left about 25,000 homeless in all; here in Khurvaleti, about 300 people now live in 110 USAID-built dwellings.

Datuna Rakviashvili is secretary of the National Security Council of Georgia and advisor to the president. He says Georgia’s 2008 war with Russia is just one more sad milestone in his country’s troubled history.

“Georgia’s national calendar is full of commemorations of unfortunate events — most of them relate to the Russian Empire or the Soviet Union or the Russian Federation aimed at weakening Georgian statehood,” said Rakviashvili, who was deputy chief of mission at the Georgian Embassy in Washington from 2011 to 2013. 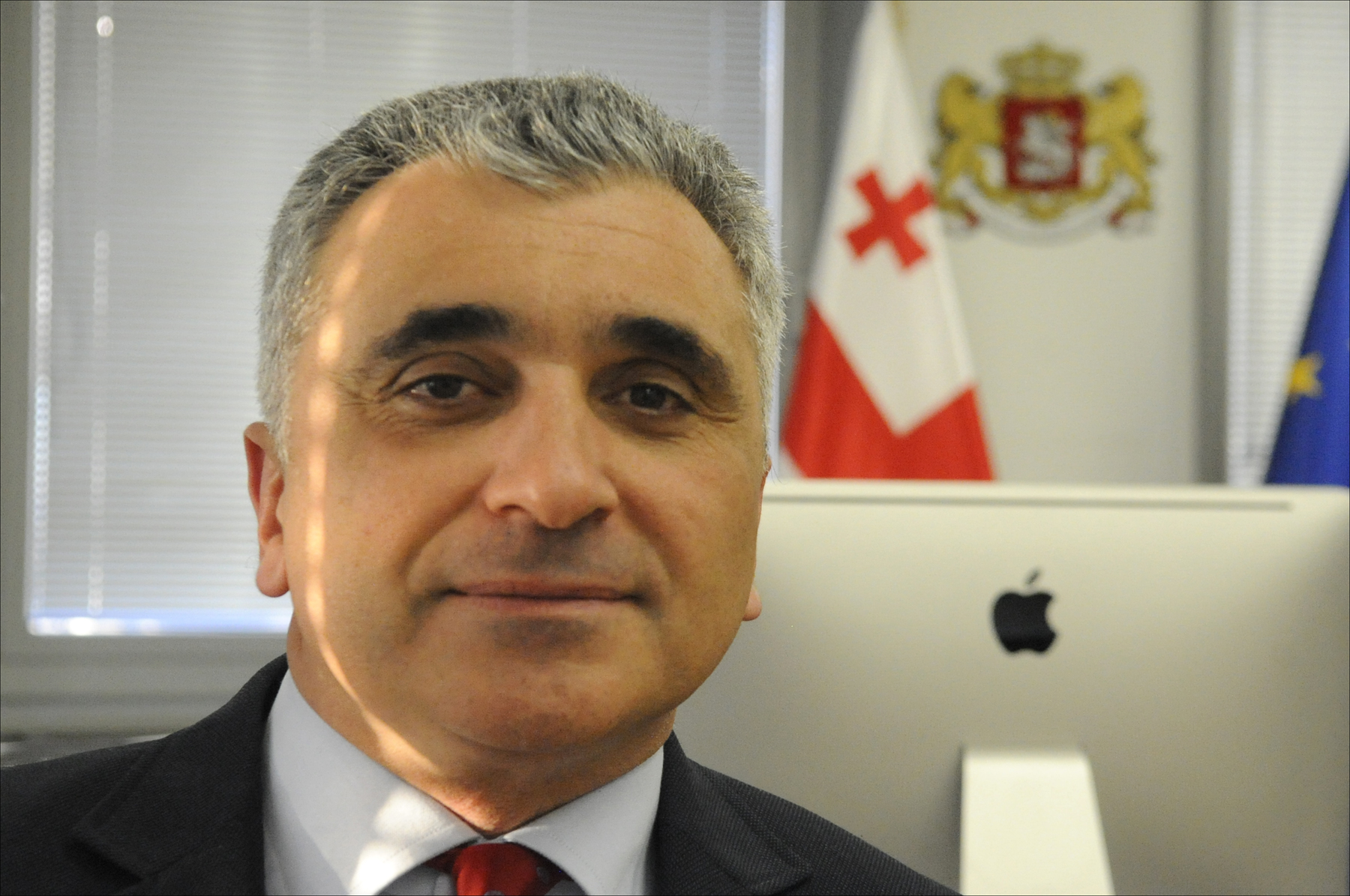 Datuna Rakviashvili, secretary of the National Security Council of Georgia, at his office in Tbilisi. (Larry Luxner)

“One of the key instruments Russia is now using against Georgia is its narrative that Georgia should acknowledge there’s a new reality, which is three independent states on Georgian sovereign territory,” he told us. “They are prejudicing the morale of society by putting up artificial lines to separate communities to prevent interaction between war-torn societies and split communities.”

The pain lingers on for many Georgians today.

“You know how hard it is when you are thinking about your childhood,” said Tina Zhamerashvili, a 22-year-old manager at Tbilisi’s Greetings Hotel whose family was forced from their native town, Nuli, at the height of the war. 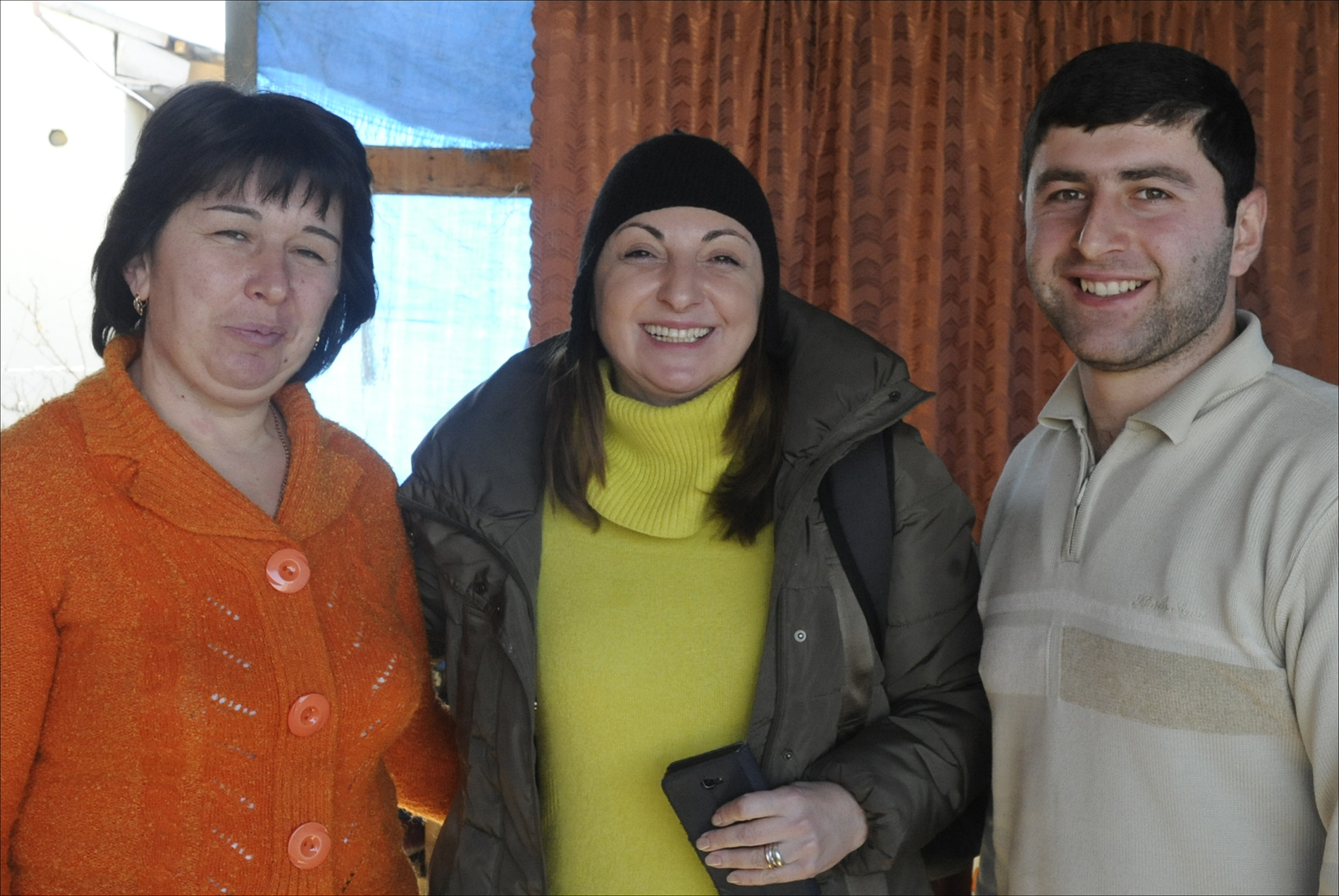 “I was only 11 and I loved my village,” she recalled through tears. “And one day, I heard my mom saying, ‘we have to go.’ Within a few days, we had lost everything. We didn’t even have one plate, one spoon, even one chair to sit on. I was crying because I hated Tbilisi and wanted my bed back.”

At a local police station in Khurvaleti, just off the main highway, uniformed officers invited me to have Turkish coffee with them. These are the cops who actually patrol along the occupation line.

“We have cases where locals are cultivating their orchards, and the Russians appear and say ‘you violated the border.’ They’re then taken to the Tskhinvali prison,” said one officer who asked not to be named. “Then the locals are alone, in front of an FSB officer, without any possibility of resisting. They’re released only after paying around 2,000 rubles. This is a lot of money, a whole month’s salary.” 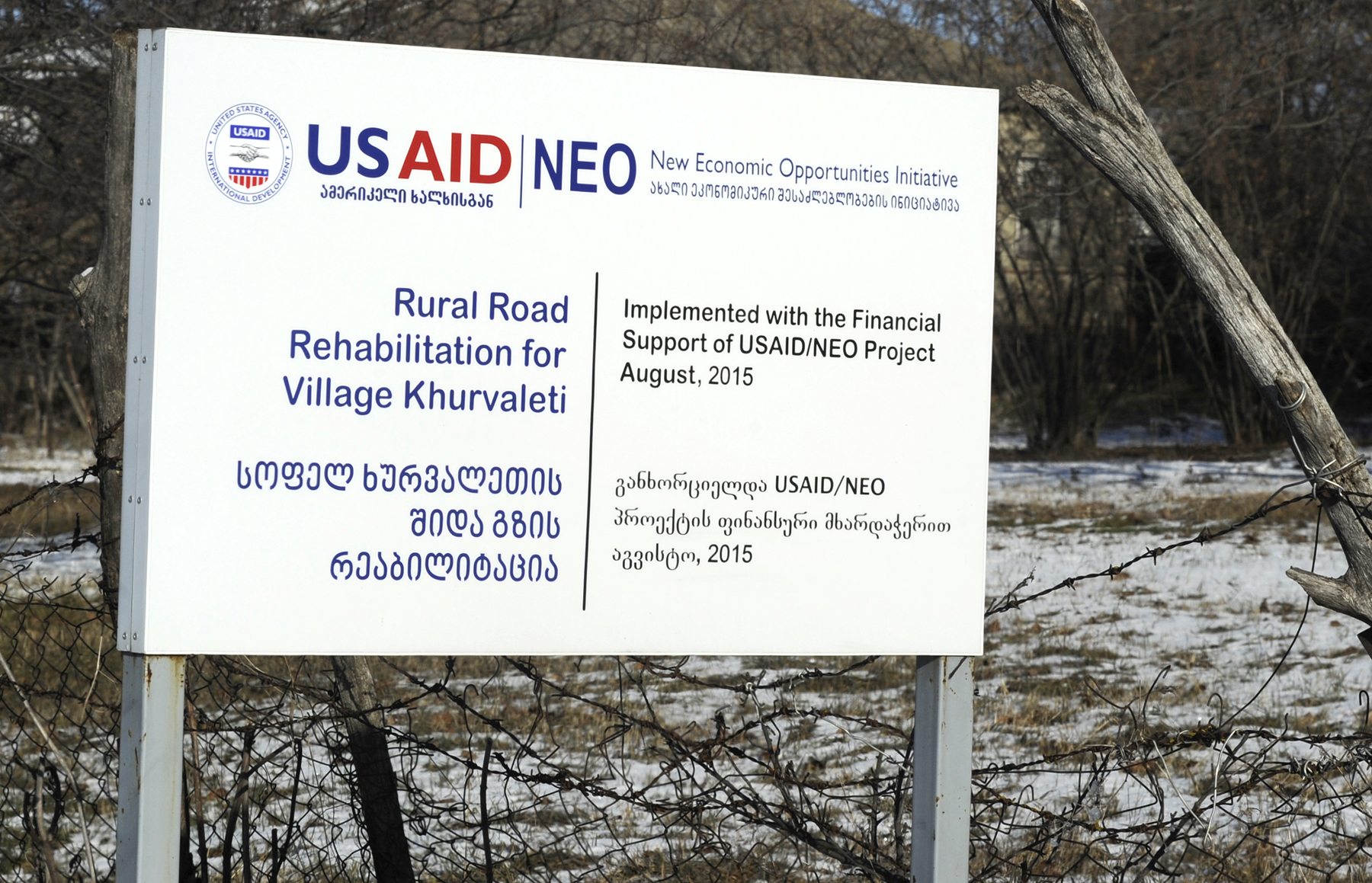 Sign identifies a rural road in Khurvaleti being renovated by the U.S. Agency for International Development. (Larry Luxner)

In fact, Rakviashvili says the Kremlin has been fighting a “hybrid war” against Georgia since his country’s very first day of independence.

“Russia went to war with Georgia in order to prevent Georgia’s integration into NATO. This is only one component of its political aims. Back in 1992, there was no indication about Georgia’s aspirations to join NATO or the EU, yet the Russians were exercising the very same policies, which have never changed.”

Agnia Grigas, a non-resident senior fellow at the Atlantic Council, says the invasion “marked a turning point” in Russian foreign policy and started Moscow’s aggressive revisionist campaign that persists to this day. 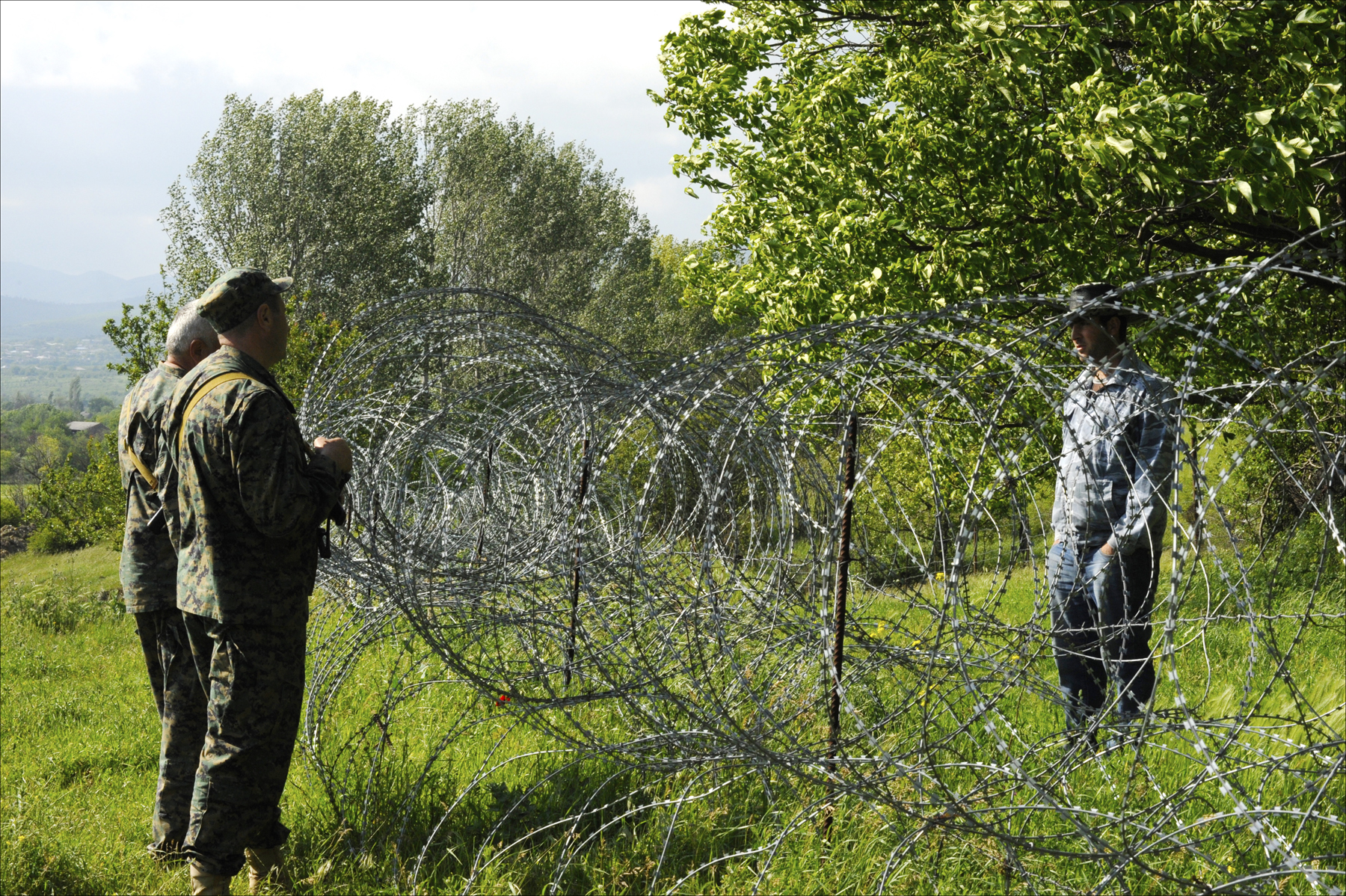 Georgian soldiers talk to a local man across a barbed-wire fence erected by Russian troops in South Ossetia. (Larry Luxner)

“From 2008, the Kremlin was no longer satisfied with softer means of influence such as propaganda, corruption, intimidation and coercion, and turned to military campaigns, land grabs, information warfare and cyber attacks,” she told me by email from Washington. “Unfortunately, with the 2008 financial crisis and the change in U.S. presidential administrations, the Russo-Georgian war was soon forgotten on the international stage.”

Grigas, author of “Beyond Crimea: The New Russian Empire,” said it was only with Russia’s 2014 annexation of Crimea and the war in eastern Ukraine’s Donbas region that it became evident that Georgia was not an exception — but rather part of the Kremlin’s broader strategy toward the post-Soviet space.

“As I demonstrate in my book, the Kremlin’s playbook to grab land involves sowing ethnic strife in neighboring countries in the name of protecting so-called Russian compatriots all under the blitzkrieg of information and cyber warfare, and with the backing of Russian military force,” she said. “Today, the frozen conflicts created in Georgia’s Abkhazia and South Ossetia, Moldova’s Transnistria, and now in Ukraine have made these countries hostage to the Kremlin and constrain their paths toward integration into the European Union, NATO and the West.”