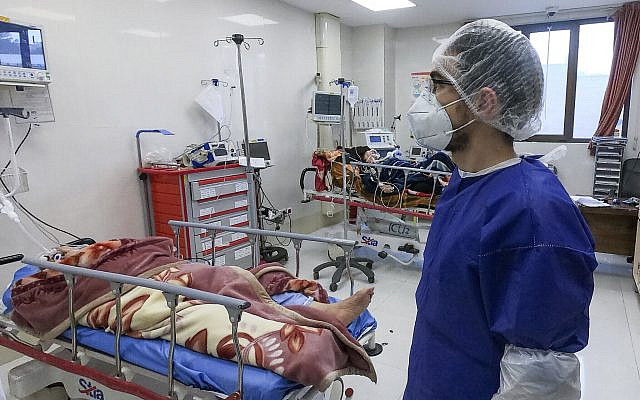 A nurse cares for patients in a ward dedicated for people infected with the coronavirus, at Forqani Hospital in Qom, Iran, February 26, 2020. (Mohammad Mohsenzadeh/Mizan News Agency via AP )

In what is arguably his funniest movie, “Love and Death,” Woody Allen plays a Russian caught up in the Napoleonic invasion of his country. Amidst the philosophical banter that produces much of the film’s humor, Allen’s very Jewish outlook shines through in what some would label his pragmatism, but others would call cowardice:

Contrast that with the image of courage depicted in the legend regarding the crossing of the Red Sea.  It’s a remarkable midrash, because it goes against all the stereotypes about the “daring” Moses and recalcitrant Israelites that we’ve been fed. In this tale, the tribes are vying for the honor of being the first to plunge into the still-raging sea, while Moses is standing off to the side immersed in panicked prayer, acting more like a Woody Allen than a Charlton Heston. Here, Moses is the sniveler, until God finally chides him saying, “My beloved are on the verge of drowning in the sea and you’re babbling on with lengthy prayers.” Nachson the son of Amminadav springs forward into the sea and gets very, very wet, while Moses, in a state of near paralysis, begs God to tell him what to do. Finally, God responds (and here I paraphrase), “Dummy! Stop praying, tell the people to move forward, and pick up your rod.” He does, the sea splits, and the rest is history.

Woody Allen’s ambivalence about risk-taking has been mocked as a relic of our centuries-old, Diaspora-conditioned negative self-image, something that was supposedly rendered obsolete by the creation of Israel. The modern Sabra has indeed fostered a new image of Jewish heroism, but Judaism remains as it always was, somewhere between Woody Allen and Ari Ben Canaan, traversing the Valley when necessary, but traversing it briskly. Ours is not a kamikaze religion. Even Moses had his moments of paralysis.

So back in 2002, when we faced another potential pandemic, a Jewish medical practitioner came to me and asked what our tradition would tell him about a doctor treating a patient with SARS. This virus was truly scary because so much about it was unknown, but what was known is that SARS was deadly and extremely contagious. Unlike AIDS, it could be transmitted without intimate contact; unlike West Nile, it couldn’t be traced to infected parasites, and unlike Ebola, it was not confined to some remote jungle. It was right here, threatening to turn your local mall into that Valley of the Shadow of Death.

That’s how we are thinking of the coronavirus today.

Eventually the panic will subside as the medical community gets a handle on the virus, but that question will remain supremely relevant, especially as doctors in China have died of infection and fatigue while treating patients with the disease.

Maimonides and others long ago codified the obligation of a physician to heal, but when a patient has a contagious disease, the obligation to save one’s own life can take precedence. If the risk is very small (safek sakanah) the doctor is obligated to heal, and if it is great, s/he is not. Interestingly, according to Dr. Fred Rosner, an expert on these matters, when a doctor treats a patient despite high risks, the act is considered a “pious one” (midat hasidut) by some halachic authorities and folly (chasid shoteh) by others. The Babylonian Talmud opines that one is not obligated to endanger one’s life even if the risk is small, in order to save the life of another. In contrast, the Jerusalem Talmud states that one should take that risk. It’s interesting that the Talmud written in the Diaspora conveys the more cautious, Woody Allen-like approach, while the Jerusalem Talmud speaks in the macho tongue of an Israeli cab driver. The dialectic between the two Talmuds reflects a dialogue that has been ongoing in Jewish circles through the centuries.

In “Love and Death,” Allen is challenged to a duel. He replies, “I can’t do anything to the death, doctor’s orders. I have an ulcer and dying is one of the worst things for it.”

It’s OK for Jews to be afraid. It’s OK to place personal safety – and, by extension, obligations to one’s family – above a higher cause, such as a physician’s oath or national objective. In biblical times, an Israelite who was afraid to fight in a (non-obligatory) war was sent home without censure. “Just go,” the officer would say. “Enjoy your new wife, new home or freshly planted vineyard! It’s OK!”

We have nothing to fear of fear itself.

Which is why I am in such awe of those who have placed it all on the line these past few weeks and the many more who will undoubtedly respond to the call in the days to come. A Jew isn’t doing these things out of a religious obligation, but out of pure love of humanity, and the hope of freeing others from the fears that enslave them. Like Nachshon at the Red Sea, they – and all others who are at the forefront of this medical crisis – have taken the plunge for all of us.