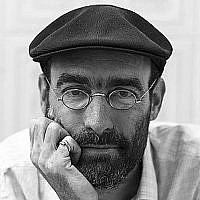 The Blogs
Tomer Persico
Apply for a Blog
Advertisement
Please note that the posts on The Blogs are contributed by third parties. The opinions, facts and any media content in them are presented solely by the authors, and neither The Times of Israel nor its partners assume any responsibility for them. Please contact us in case of abuse. In case of abuse,
Report this post.

Some years ago I celebrated Rosh Hashanah in Uman. I went there out of curiosity and a wish to understand the trend. But when I began to wander around the town among the thousands of Jews engaged in prayer, something happened to me: I became one of them. There was something contagious about the gathering together, or perhaps the brotherhood of men, or the mass prayer, and I was captivated by the intoxicating charm that pervaded the place like unseen fog. I took pleasure in the immersion into it, and let myself fall in love with the whirling goings-on around me.

There are many reasons why Uman is a special religious event, but in truth one need not travel that far in order to feel an integral part of community prayer. It can be found in every synagogue, every day. Especially on holidays – and even more so on the High Holidays – many Israelis who never attend synagogue during the year come to be part of the festival. It is not surprising, I think, that the Yom Kippur services attract so many. The ‘holiest day of the year’ somehow compels us to gather together. It is worth trying to understand why.

Let us look at the question from the opposite side: Can the High Holidays be celebrated alone? Not from a Halakhic perspective, or even from the question of social feasibility, but mainly from an existential-religious point of view: can Rosh Hashanah, Yom Kippur or Sukkot be celebrated by the lone individual? Festivals are generally designed to be community events and it is easy to understand how holiday traditions strengthen ties between community members. It is also known that holidays are troubled times for those without family or community with whom they can celebrate. But our question addresses a different issue: is there a religious, spiritual meaning to the community celebration?

We who have been raised, educated and live in a western, democratic society share a worldview that places the individual — his rights, obligations and above all, his autonomy — at the center. The monolithic, autocratic status of the individual is an assumed prerequisite of our justice system, economy and form of government. The logic upon which all this is based is straightforward: The individual is responsible for his opinions and accountable for his acts, for which he alone reaps reward or punishment.

To understand how vastly different this worldview is from one that is family or tribal-oriented, one need only examine the ancient customs and laws of society that assigned collective responsibility for the deeds, good and bad, of its members. The practice of blood revenge and honor killing make sense and can be perceived as just only if the entire tribe assumes responsibility for all its members, or because the family is seen as one social and legal entity. Yibum, the levirate marriage laws, is another example; it is appropriate only if brothers are bound to the perpetuation of each other’s names. Today, of course, the situation is very different. The individual – not the family, despite our fondness for saying so – is the cornerstone of modern society.

It is apparent to us that holding the individual responsible for his deeds represents a moral leap forward in the social and legal realms (a fitting answer to the prophet’s cry, “If the fathers ate sour grapes should the child’s teeth be set on edge?”). But from a spiritual-religious point of view, individualism lacks a vital dimension. Our modern eyes view a religious individual as one who has a personal relationship, whether more or less intimate, with God. Or we may speak of someone who is ‘on a spiritual journey,’ expected to bring that person to a loftier plane, through a private, internal transformation. Yet I maintain that by shifting from communal to private religiosity, we have lost an important element in our spiritual lives.

To clarify the matter, I refer to Emile Durkheim (1858-1917), whose writings form a basis for research on religion as a social feature. Durkheim spoke of man as Homo Duplex, the “double man”, i.e., an individual and a social being in one. Each of us has these two sides and none of us can be understood by looking at only one dimension of identity. Durkheim goes on to observe the difference between a religion rooted in the individual, dependent upon his choice and designed according to his needs, and a religion of community, bequeathed to the individual by his ancestors, that first and foremost answers communal needs. Though related, they are distinct.

The process of secularization experienced by the West over the last few hundred years has significantly weakened the latter (which has split into a growing variety of streams and movements) and has brought an unprecedented measure of popularity to the former (consider, for example, New Age spiritual circles). As a sociologist it is easy to guess that for Durkheim, the communal ceremony was the formative premise of the community. But Durkheim posited another important argument: that the collective ceremony was also the formative premise of religion and religious experience.

According to Durkheim: The very act of congregating is an exceptionally powerful stimulant. Once the individuals are gathered together, a sort of electricity is generated from their closeness and quickly launches them to an extraordinary height of exaltation. Every emotion expressed resonates without interference in consciousnesses that are wide open to external impressions, each one echoing the others. (Elementary Forms of Religious Life, p. 217)

Gatherings thus have more than just a social aspect; they have experiential meaning. The individual who celebrates as part of the community heightens his powers of perceptiveness and the force of his emotions, and when these are directed towards the Divine dimension, a powerful religious experience is produced. Thus, celebration of a festival by an isolated individual poses not only a technical Halakhic and social difficulty but also results in a deficient religious experience. Without reducing our religiosity to solely the experiential, we can still establish that communal prayer and celebration carries religious added value. The spiritual resonance between members of a community at a ceremony or prayer is conducive to an emotional receptiveness that enables us to reach a much more heightened sensitivity than we could reach alone.

We can therefore see that collective ritual practice not only shapes the community, it also fulfills each individual’s need for community. In other words, we need community not only in order to survive or to meet the challenges of life more efficiently, but also in order to develop culturally, spiritually and religiously. We are communal creatures no less than we are individuals. Without understanding ourselves as Homo Duplex, comprised of two active identities – the personal and the communal – we cannot comprehend how vital the collective religious ceremony is for us.

To return to the High Holidays: The communal prayer services on Rosh Hashanah and Yom Kippur, the family meals, the welcoming of guests in the Sukkah, all these bring us together to address our God in concert. Not by chance are the festivals designed thus, and not by chance is the community present in the synagogue on the High Holidays in increased numbers. Our ability to truly celebrate the holidays is dependent upon our doing so with others. The singular sanctity of these days and the desire of the many to make them special bring added emphasis upon their communal observance. The start of a new year is intensified by shared celebration.

About the Author
Dr. Tomer Persico is the Koret Visiting Assistant Professor at the Helen Diller Institute for Jewish Law and Israel Studies at UC Berkeley, and the Shalom Hartman Institute Bay Area Scholar in Residence.
Comments