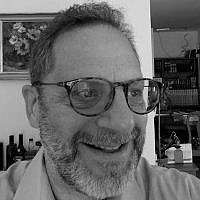 The Blogs
Avram H. Herzog
Apply for a Blog
Please note that the posts on The Blogs are contributed by third parties. The opinions, facts and any media content in them are presented solely by the authors, and neither The Times of Israel nor its partners assume any responsibility for them. Please contact us in case of abuse. In case of abuse,
Report this post.

I consider myself blessed to be close not only with my own nuclear family, but also with my wife’s.  Just how close I would become to one of them, my wife’s brother-in-law Doug, is not something I could have imagined or envisioned in my wildest dreams (and as I get older the wilder they become).  It began when I received an email from him asking me if I would consider doing him a favor, a favor for which he needed a rabbi.  “Don’t let it go to your head,” he wrote, as “you’re the only rabbi I know.”

So began a chain of email exchanges and events which led to one of the most memorable and profoundly meaningful moments of my life.  Doug, at the time a classroom teacher, had taken his class on a trip, the itinerary of which included a visit to Arlington National Cemetery.  They saw all the usual graves typically visited by tourists.  They roamed the grounds.  And then Doug took them to the grave of his father.  When he returned home and showed his wife Yvonne (my wife’s sister) the pictures from the trip, she asked him why his father’s tombstone was engraved with a cross.  (A standard issue military tombstone notes the name, dates of birth and death, and a cross—unless the personnel are notified that the deceased was of another or no religion).  Doug explained to her that he hadn’t previously given it a thought.  Now that she had mentioned it, however, all that was about to change.

Douglas Lorie (1906-1958) was a captain in World War II.  For reasons that remain somewhat murky, he hid his religious identity from not only the military, but from his peers and associates as well.  He had sadly taken his own life when his sons, Doug and Anthony, were but children.  Once an adult, Doug and his mother Barbara rarely spoke of his father.  But now that he had taken his class to visit his father’s grave and showed the pictures to Yvonne, the tombstone and its bow to Christianity began to bother him.  At first, he didn’t wish to bring up a fraught and uncomfortable topic with his mother, lest he upset her.  But when initial thoughts turned to haunting preoccupation, he knew he had no choice.  It turns out that his mother was quite relieved that he brought it up, as she too never did so out of fear of upsetting him.

Doug decided that he wanted to do something in honor and memory of his father.  He needed to bring closure for himself and do right by his father at the same time.  After considering several options, Doug, with the blessings of his mother, decided to contact the military personnel and explain that his father’s tombstone had been engraved with a cross, when in fact he was Jewish.  Doug requested that the cross be replaced with a Star of David.  He was pleasantly surprised that they agreed to issue a new tombstone in short order.  With one phone call he had the closure he so desperately needed.  Or so he thought.  The haunting feelings, however, wouldn’t leave him, and he realized he had to do something more than simply replace the matzeivah.  But what?  More deliberation led him to realize that he could not rest until he held a Jewish funeral for his father.

And that’s when I received the above-mentioned email.  After providing me with the details I just shared with you, theretofore unknown to me, he asked me if I would officiate at the Jewish funeral for his father.  I couldn’t possibly turn down the opportunity to be there for my brother-in-law; I couldn’t recuse myself from the only chance for his father to have a proper Jewish funeral.  (And as much as he admonished me not to let it go to my head, I admit that I realized it’s not every day that a rabbi has the occasion to officiate on Arlington).

So it was that we all—Doug and Yvonne, Doug’s mother Barbara, Doug’s brother Tony and his partner Rod, and Yvonne’s siblings and their spouses: Roberto and Donna Marie, Elizabeth and Bill, and my wife Leah and I—made our way to Arlington for this momentous occasion.  We spent the previous night together in a nearby hotel, during which time Doug mentioned to me that he would like to recite some part of the service in the original Hebrew.  As we did not have a minyan for the ceremony, the full Kaddish could not be recited.  But an excerpt indeed could be, and so I recorded the opening words of the prayer from which he would practice for the next day.

The funeral began with me welcoming all present and sharing the background of and leadup to this day (which included only the abovementioned family members and two of Doug’s close friends), followed by the traditional biblical and liturgical readings, and finally touching words by Doug, Tony, Barbara, and several others.  The religious component concluded with the recitation of the Keil Malei prayer and Doug’s tear inducing recitation of the Kaddish excerpt in both the original Hebrew and English.

I closed the ceremony by addressing Captain Douglas Lorie directly (who, by the way, was a descendant of none other than the famous kabbalist of Safed, Rabbi Isaac Luria).  I told him just how touching it was, and how fortunate we were, to come together to pay him the traditional kavod acharon (final respect) he so deserved.  I explained to him how while he had felt conflicted and haunted about his Judaism in his too-short lifetime, he could now finally, truly, rest in peace.  And I shared with him that he no longer had to hide his Jewish identity, as starting today and for all eternity, with thanks to his dear wife Barbara and beloved son Doug, he will proudly be wearing his Star of David for all to see.

On this Veteran’s Day, may the memory of Captain Douglas Lorie be for a blessing.  Yehi zichro baruch.  And may we all, as he now does from his place in heaven, wear our Judaism with unabashed pride.

About the Author
Rabbi Avram H. Herzog received semichah and a Masters of Hebrew Literature from Hebrew Theological College (Skokie Yeshiva). He was a classroom teacher for over 35 years, and served as a congregational rabbi in Milwaukee, Chicago, and Cincinnati. He is a sought after scholar-in-residence and has served in several communities throughout the United States, Canada, and Israel. Adult education is his first love, and he currently teaches live and online Torah classes through several venues. He also freelances as a translator and editor of both Hebrew and English works. Rabbi Avi and his wife Leah made aliyah in the summer of 2019 and live in Givat Ze'ev. He is proud to follow in his parents' footsteps, who made aliyah in 1996. They are the parents of two adult children, a son who lives in Boston and a daughter who served in IDF and currently lives in Yerushalayim.
Comments