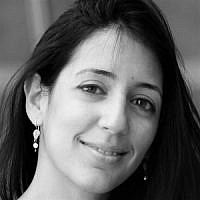 The Blogs
Elodie Tordjman
Apply for a Blog
Advertisement
Please note that the posts on The Blogs are contributed by third parties. The opinions, facts and any media content in them are presented solely by the authors, and neither The Times of Israel nor its partners assume any responsibility for them. Please contact us in case of abuse. In case of abuse,
Report this post.

Is ideology the only motivation for alyiah today? Economic growth in Israel now attracts educated people from France, eager to succeed just as well as they would in their home country. Their number is increasing and they have joined a lobby group to defend their interests.

New deal for Aliyah: crisis in Europe vs Israel’s growth

Immigrating to another country and assimilating into the population, be it for political, economical or personal reasons, has always been a challenge. Way before the creation of the State of Israel, populations from all over the world have been attracted to the Holy Land for various reasons. As Anti-Semitism was growing in Europe, in the 40’s, and peaked again over the last decade, one could think racism and the fear to be discriminated against for their Jewish identity in the diaspora were the main reasons pushing Jews to flee their home countries. But considering recent waves of immigration to Israel at the beginning of the 21st century, we can understand that Jewish people’s motivations have evolved and shifted from those grounded in ideology to those economic in nature.

Zionism used to be just an ideology and Jewish immigration a painful escape. The suffering experienced by new immigrants as part of their ‘welcome package’ was often taken for granted and newcomers were expected to praise the country their elders had built. As saying goes, “last come, last serve;” immigrants often needed a generation or two in order to build a satisfactory life for their families.

But today, unprecedented growth in Israel and Europe’s decline reflect two opposite trends of a strange blend that have balanced out this situation. As a consequence, highly-educated and skilled populations can almost hope for a similar standard of living in Israel.

French newcomers are recently getting organized in structured groups in order to fight for their rights. One of the key challenges for educated Olim is to have their diplomas recognized in Israel, work in the job for which they have training and reach the same standards of living of their home countries.

Unemployment rate has been rising in France since the 2008 crisis, rocketing to terrible heights (10.6% of the population at the end of 2015  versus 5.9% in Israel) while Israel’s job market is far more elastic. Making alyiah appears a better option both for young people choosing to study abroad and adults from their late 30’s to early 40’s. The trend in France to seek their horizons is relevant for Jewish youth but also for young disillusioned adults from Generation Y and even younger students willing to widen their experience to greater horizons. It seems that more and more young people and more mature executives in France fear they might not build a comfortable life for themselves and their family. The competitive advantage of Old Europe relying on its grandeur from past centuries is crumbling.

Terrorism is no longer a key issue on which one decided whether to settle in Israel. September 11th initiated a long-lasting trauma for the United States and also for Western countries: the most powerful living democracy in the world was mourning thousands of people and experiencing unparalleled horror occurring on its home soil. From 2001’s terror attacks, such dramatic events have been striking great cities all over the world repeatedly. Indeed, Al Qaeda, Boko Haram and later Daesh (ISIS) and so many fundamentalist groups related to extremist Islam have spread terror everywhere, aiming for many great cities in Europe and worldwide, blindly targeting the population. Among them, Madrid (2004), London (2005), Boston (Marathon bombing, 2013), Brussels (Jewish Museum, 2014), Sydney, and Paris (January and November 2015). Terrorism is now likely to happen anywhere. Those perpetrating these slaughters are united in their common acts as self-made killers organized in small groups rather than large armies. This economical business-model appears henceforth based on entrepreneurs of hatred, supporting their own share of risk. Thus, terrorism is no longer a determining factor when choosing where to live. On the contrary, Israeli citizens seem far more prepared in anticipating how to quell a terrorist threat when considering the number of citizens who possess weapons.

But the question remains whether political pressure and racism is now totally so unbearable in Europe that people would give up a stable profession for which they hold diplomas? Adapting to changing circumstances and coping with a different culture, rhythm, mentality and way of life are certainly hard. But this is perhaps the harshest challenge of all: to earn a living out of the education acquired abroad. That is why olim are now forming political lobbying groups to address this issue..

A French lobby group has just been created to serve the interests of a growing minority in Israel. Qualita is headed by dynamic professionals like Mickael Bensaddoun, a French executive with a strong political and business background. He grasped the major issue facing  integration of olim: the risk of coming to Israel and sacrificing a stable financial situation in order to stay here. The danger to many olim is that immigrating to Israel requires not only speaking Hebrew but giving up your former identity.

Olim have to shape their professional future in order to become Israelis and stay in the Holy Land.

For this reason, Mickael has created the NGO, “GVAHIM”, which helps educated olim understand the Israeli market, adapt to the Israeli way of conducting job interviews and find good jobs.

New waves of Aliyah are boosted by professional lobbyist organizations, and managed by powerful leaders. Their main objective here is to help newcomers valued for their skills and what they can bring to the country. Educated new olim represent an opportunity from a macro perspective, but is obviously seen as a threat for professions like doctors, lawyers etc. Professions already organized into unions in Israel are careful to maintain entry barriers to protect their “businesses”, leaving behind the competition posed by immigrants. Translating diplomas from one country to the Israeli context, overcoming Israeli bureaucracy and changing the legal framework are the major issues at stake for this struggle, already a laborious one.

Qualita is aiming at creating bonds within political circles and pushing to have diplomas of professional olim such as dentists, doctors, speech therapists and so on, recognized. It seems to act in a far more aggressive way than its Anglo cousin, Nefesh B’Nefesh, an NGO rather dedicated to provide people with valuable information than advocating on their behalf.

The good old days where Russian PhDs and teachers would become street cleaners are gone. Skilled new immigrants can now stand up for their interests right away rather than wait for their children to do so.