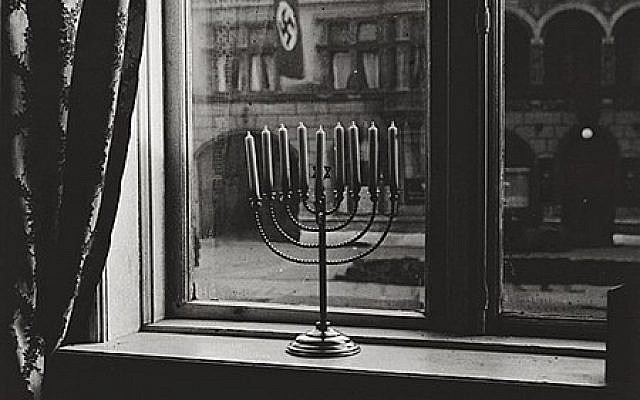 Chanukah Menorah in the window of Rabbi Akova Boruch Posner, opposite the Nazi Party headquarters building in Kiel, Germany, in 1932. The text on back of the photo reads: "Chanukah 5692 (1932) 'Death to Judah' So the flag says 'Judah will live forever' So the light answers"

I’m reading the Jerusalem Post, when I run across a headline, “Biketoberfest: Nazi-symbol hats spark outrage at Florida bike festival.”

Of course, a trifecta.

They’ll sell a bunch of that Nazi crap to these wannabe fascists.

I wonder, “What was Oktoberfest like under the Nazis?”

Well, in 1933, Jews were forbidden to work on the Wiesn (the Bavarian Oktoberfest) and Hitler started to use the festival as a propaganda tool.

I return to reading the article.

I see that the staff at the Post latched onto an article found in the Daytona Beach News-Journal.

The theme of the article is this vendor (Jenny) is selling SS armbands with skull-and-bones insignia and hats emblazoned with swastikas at a Daytona bar called Froggy’s.

Doesn’t the Jerusalem Post know this ain’t no big deal in the post-Trump age.

He empowered these neo-Nazi jerks and they’re running with it.

I know that U.S. biker rallies have sold Nazi crap for years, but at least they sold it under the counter.

Not anymore—-the armbands and the caps sit right next to the Harley Davidson keychains. hats, belt buckles and bandanas.

The Daytona Beach News-Journal doesn’t even bother to give us Jenny’s last name.

I guess the newspaper doesn’t want to hurt Jenny’s feelings.

But here’s the part of the story that really hurts my feelings.

Jenny told the Journal,  “The merchandise was not reflective of racism on her part because the swastika-logoed hats were a tribute to veterans of World War II. Jenny added, “That selling them at other biker rallies never sparked any complaints. Further, not all of her merchandise contained Nazi imagery.”

Some tribute. Some country. Some defense.

I doubt that the hundreds of thousands of American GIs that were killed by Nazis or wounded by Nazis or their relatives consider these Nazi symbols a tribute.

However, 45 had taught this vendor of hate that you can throw any amount of shit into people’s faces and in Amerika almost half of them will eat it.