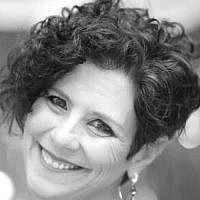 The Blogs
Shelley Kleiman Trachtenberg
Apply for a Blog
Please note that the posts on The Blogs are contributed by third parties. The opinions, facts and any media content in them are presented solely by the authors, and neither The Times of Israel nor its partners assume any responsibility for them. Please contact us in case of abuse. In case of abuse,
Report this post.

I had not ventured into the Old City of Jerusalem since my last group of tourists left the country close to four months ago. It seems like a lifetime. Last week I decided to visit my professional playground.  Alone. My first stop, an imaginary group of tourists in tow, Mamilla Avenue. But no one asked me about the numbers etched on the weathered stones, about Theordor Herzl’s one-time presence; no one asked me about the sculptures that line this outdoor pedestrian mall–and no one asked about the next restroom break.

There were random shoppers, some with masks covering their nose and mouth, others with masks dangling on their chins and some with their faces totally exposed. The law notwithstanding, everyone seems to make their own rules.

I climbed the stairs to the spot that once marked the 19-year divide between the newly declared State of Israel and the Hashemite Kingdom of Jordan.  “Look at the 16th century walls built by Suleiman the Magnificent; look in the distance at the 19th century windmill, built at the behest of Moses Montefiore.”  But no one is looking.  No one is listening.  The square is empty.  Just a few solitary souls making their way into the Old City.  I follow, entering through Jaffa Gate. 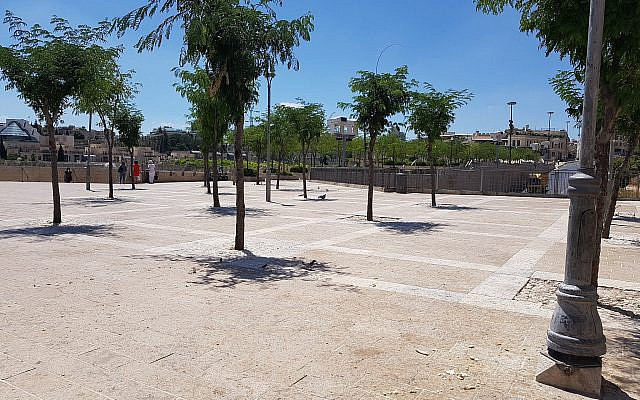 I decide to stroll through the four quarters–the Christian, Muslim, Jewish and Armenian.  One square kilometer, this microcosm of human experience is home to the three great monotheistic religions, the stage setting for the loftiest of spiritual quests and some of the bloodiest of battles.  For centuries, it has attracted pilgrims and warriors alike and tourists, tourists, and more tourists from every far-reaching corner of the globe.

It was hard to fathom how the Old City would look without the throngs of people rushing to reach their holy destinations, jostling to see yet another site, and haggling over the price of brightly painted Armenian pottery dishes, pashmina scarves (made in the Far and not Mideast) and olive wood camels. Silence.  No calls for “baigelah, baigelah“–that elongated doughy Mideastern bagel–the peddler just inside the gate is sitting alongside his empty cart.  Even the handful of people milling about seem to be speaking in hushed tones.

“How does the city sit solitary, that was full of people. How is she become like a widow.” 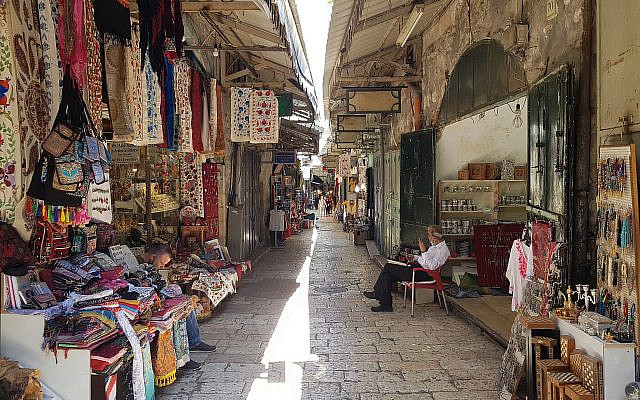 I start down David Street, the main artery of the souq, shuk, perhaps once (archeologists have not made up their minds) the Decumanus Maximus, the east-west access road of Roman times.  Some stalls are shuttered, but others are open, their colorful wares and fragrant spices on display, as if tempting, almost daring the ghosts to enter and browse.  Those few rushing through the market are heading perhaps to the Kotel, the Western Wall or the Temple Mount, the Haram Al-Sharif. The shopkeepers don’t even bother looking up from their card games or backgammon boards.  Many are cradling steaming glasses of tea. 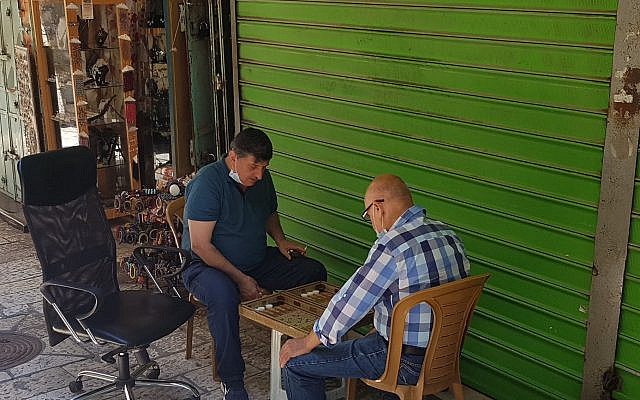 I turn left onto Muristan Road, one of the main streets of the Christian Quarter and once the complex of the Hospitaller Order of Knights. One of the approaches to the Church of the Holy Sepulcher is through a narrow archway.  Just a few months ago, it was jam-packed with people coming and going, pushing and shoving; I have always considered it a colossal feat, navigating tourists through and not losing anyone.  Today, I walk through effortlessly.  I had already been told the Church would be empty.

For so many Christians, this is their epicenter, believed to be the site of the crucifixion, burial and resurrection of Jesus.  A Crusader structure, built over the mostly destroyed Byzantine church, the site had become over the past few years so packed with visitors, that a finding a place to guide (and breathe) had become a professional challenge–or hazard.  And now I was overwhelmed–truly dazed–by the magnificence of the site shared by several Christian denominations. Sunlight was streaming through, casting supernatural beams.  From Golgotha (Calvary) to the Stone of Unction to the Rotunda to the many small chapels, it felt as though I was seeing the Church for the first time.  I shared the place with but a handful of worshippers. 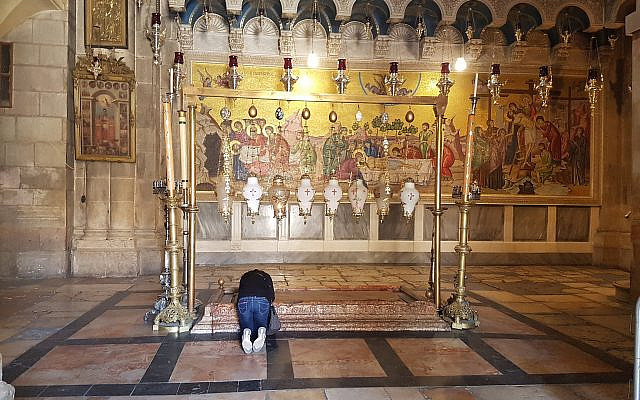 Heading now along Al Wad (the Valley) Street in the direction of the Western Wall, there was the usual mixture of hijab-clad Muslim women pushing strollers, Hasidic men in their traditional garb and Israeli soldiers .  I spied another tour guide. One Arab shopkeeper called out to me, an old friend from a bygone era. 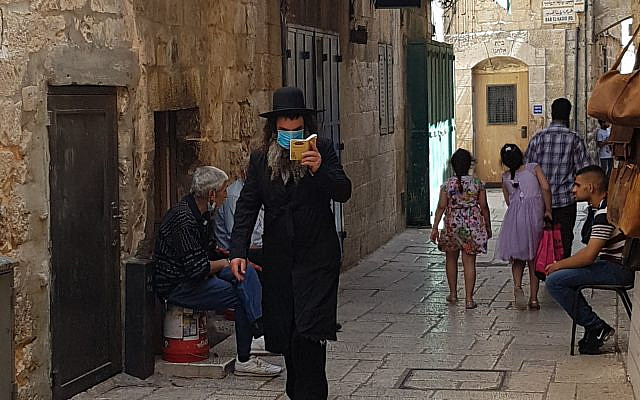 I had never seen the Kotel empty.  The remains of the Second Temple’s retaining wall date back two-thousand years to the reign of King Herod.  For many it is a most sacred site, for others it triggers historical memory; for most it symbolizes generations of yearning for a homeland and for a period of justice and peace.  I have seen tourists–Jews and non-Jews alike–shed tears when they touched the ancient stones and placed prayers in its worn out cracks. To allow for social distancing, prayer groups are now relegated to separate modular compartments, a type of “new age Kotel,” one friends calls it.  I could not even count a dozen worshippers while I stood there. But it was this stillness that allowed me to sense, for the first time in so very long, the Wall’s commanding presence and its affirmation of Jewish continuity. 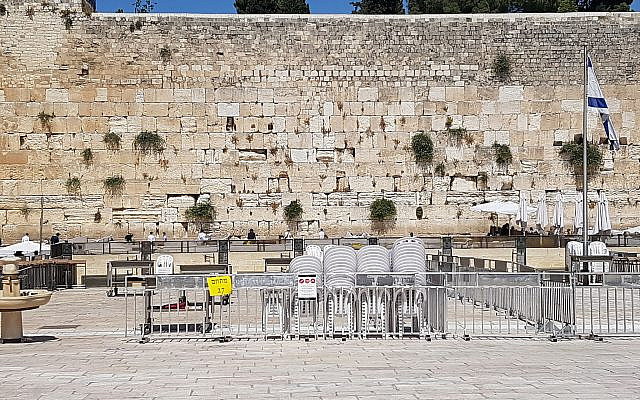 Climbing the steps to the Jewish Quarter, I was greeted by calls of the beggars who continue to man the ascent–but without the tourists, they too, have lost their main source of income.  One of my frequent stops for lunch with visitors, the Quarter Café, was shut. I had spoken to the owners a few weeks ago.  Would they reopen once restaurants were given the green light? There was no point, they said.  Their business relies on tourism and they too are among the casualties of the industry’s fallout.  Just a few months ago, it was impossible to find a seat at any of the cafes and pizza and burger shops that line this eatery strip.  Today you could sit and eat anywhere.  This has truly become a seize-the-day opportunity for Israelis to visit the holy city. 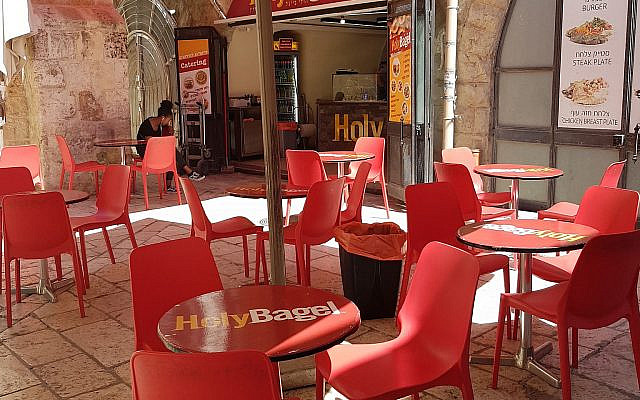 I meandered back to Jaffa Gate through the Jewish Quarter and around the outskirts of the small Armenian Quarter, stopping for a moment in front of the façade of their Cathedral of St. James.  As I continued on my way, a handful of priests passed me, motorcycles zoomed by, and children on their way home from school skipped ahead. 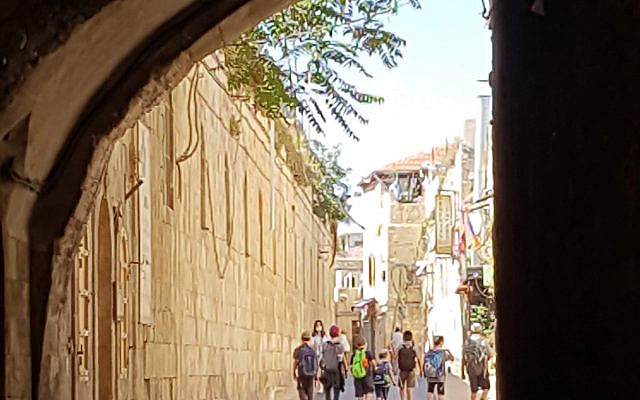 Life does seem to go on. I exited the Old City and walking down Mamilla I noted how the “Kippa Man” was now selling an assortment of colorful face masks.  We always find ways to reinvent ourselves. 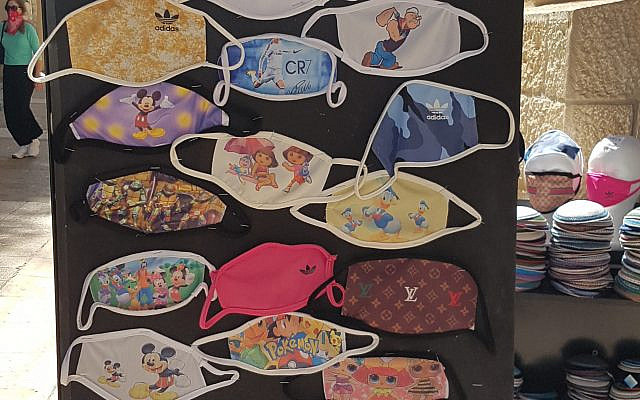 One day the pandemic will end and tourists will return, and they will line our streets again and fill our shops and restaurants; and they will admire our ancient sites and pray at the many sacred spaces. Despite the sense of sorrow and abandonment, it was the quiet that allowed me to savor the beauty of eternal Jerusalem.  And now I look forward to sharing it.  Once again.

About the Author
Born and bred on the upper West Side of Manhattan, (the then hub of modern Jewish Orthodoxy), I made Israel my home 38 years ago. Graduate of CCNY (BA) and Harvard University (MA) in English and American Literature, I am a lapsed freelance writer and currently unemployed tour guide/educator waiting oh so very patiently for visitors to return.
Related Topics
Related Posts
Comments