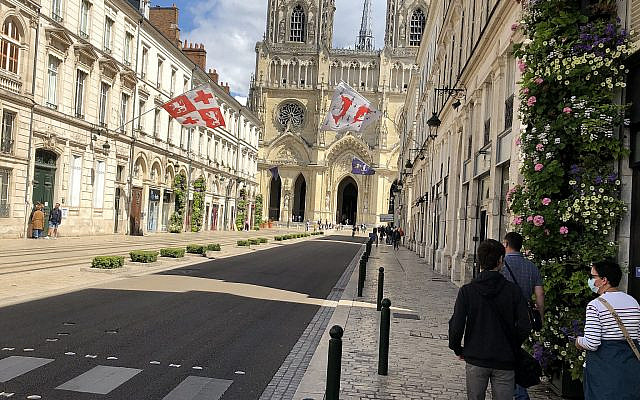 Just over a week ago, while en route to Paris on our way home to Israel, we stopped to take a brief look at the famous city of Orleans, one of France’s foremost historical sites, and associated indelibly with Joan of Arc, a.k.a. the Maid of Orleans.

Because of its location on one of the northern-most bends of the River Loire, the city was always an important trading port. After the city was destroyed by Julius Caesar, the Roman emperor Aurelian rebuilt it, naming it after himself, and this became ‘Orleans’ in the local dialect.

During the Hundred Years waged between France and England in the fifteenth century, a young peasant girl, Joan of Arc, born in north-eastern France to simple peasants, claimed to have heard a divine message telling her that she had been chosen save France and install the heir to the throne, the Dauphin Charles, to his rightful position at the head of the monarchy.

She managed to convince Charles that she was divinely inspired and protected and, with his support, led troops into battle against the English who were entrenched in Orleans. With her at their head, the French fighting force defeated the English and raised the siege of Orleans. She also managed to have Charles crowned king of France at Rheims in 1429. However, her enemies at court persuaded the king, now Charles VII, to abandon her, and she fell into the hands of the English enemy, who tried her as a witch, accusing her of heresy for having cut her hair short and donned men’s clothes.

After being imprisoned for a year, she was burned at the stake, but her fame continued to grow and her memory to be revered, until in 1909 she was beatified in Notre Dame cathedral.

We visited the city’s Cathedral of the Holy Cross, so called because it purports to have pieces of the original cross given to it by Saint Helena, the mother of Emperor Constantine, the first emperor to accept Christianity. The imposing neo-gothic building has been built and rebuilt several times in the thousand-plus years of its existence, and among its most impressive features are the stained-glass windows depicting the life of Joan of Arc. The young volunteer guide who escorted us helped us to perceive the various scenes in the saint’s life, and their nineteenth-century artist has managed to provide a highly imaginative and graphic account of Joan’s tumultuous and extraordinary life.

The city is also home to one of Europe’s oldest universities, and hosted the religious reformer John Calvin in the sixteenth century. The English king, Henry VIII, made use of Calvin’s teachings in his struggle with the Pope in pursuit of a divorce. As a mark of his gratitude he donated money to the university. 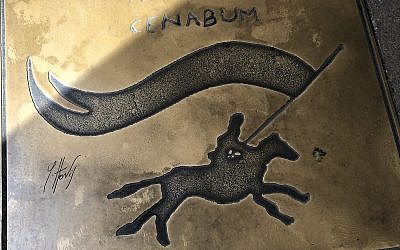 The centrsl part of the town comprises broad streets, its paving stones occasionally interspersed with copper plaques bearing the town’s emblem, which depicts Joan of Arc on horseback, flying a banner. Her own banner, which went everywhere with her, bore the words ‘Jesus, Maria,’ but the Latin words on the copper plaques are the name given to it by the Roman emperor: Aurelius Cenabum (City of Aurelius).