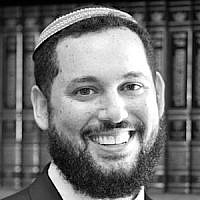 The Blogs
Uri Topolosky
Community Builder and Spiritual Leader
Apply for a Blog
Please note that the posts on The Blogs are contributed by third parties. The opinions, facts and any media content in them are presented solely by the authors, and neither The Times of Israel nor its partners assume any responsibility for them. Please contact us in case of abuse. In case of abuse,
Report this post.

My earliest memory: I’m 2-and-a-half, living in Sharon, Massachusetts. I’m in my father’s arms, against his bare chest. He’s wearing swimming trunks, standing waist deep in water, in a pool that feels Olympic sized, but was probably just a six foot square. Little blue tiles cover the floor, wall, and ceiling. Three men stand above us. The middle one is shorter than the others and balding.

I have been told that young memories like this are often forged by trauma. In my case, it is a holy trauma, a moment, frozen in time, just before my father dipped me, wide-eyed, below the surface of the water.

That was the day, I became a stranger.

A bit ironic, don’t you think? That when you are welcomed into the Tribe, you are labeled a Ger. A Stranger. What kind of welcome is that?! “Welcome, stranger!”

But I was no stranger to stranger-dom. I had been through it all before. Three years earlier, in Phoenix. Immersing in a double womb. The water, surrounding my mother, surrounding me. Three men again, I’m told, but I couldn’t see. We thought we became strangers that day.

But apparently, we weren’t quite strange enough.

The rabbi was an RJJ musmach (his ordination was from Rabbi Jacob Joseph Rabbinical Seminary, an estimable Orthodox institution). But the Orthodox rabbinate didn’t pay. So he took a Conservative pulpit in Phoenix to support his family. (For the record, that wasn’t so strange in those days.) And as a result, we weren’t good enough strangers for every community.

We needed to be really strange.

So we dipped again when I was 2-and-a-half. And it worked. At least for a while. People stopped questioning if we were strange enough. We most certainly were.

Take our family for example. Holiday gatherings were most decidedly strange. Chanukah was followed by Christmas. After Pesach, there was Easter. And Thanksgiving was huge. Huge. Coolers of beer, Notre Dame football, and my eight sets of aunts and uncles, and 26 Irish Catholic first cousins.

But we were strangers now, so my mom prepared kosher plates of food that matched the holiday menu at my Nana and Jidu’s table. It was a pretty good match.

My Nana was Irish, which made for good fun, but my Jidu was Lebanese. And that was way more interesting than just the baklava. He was a devoted Maronite Catholic, and cherished a portrait over the mantle capturing his hug of Pope John Paul II. He always told me to visit his family in the Middle East, and never quite got how that would be strange. Even for a stranger.

He wasn’t the only one that never quite understood what it meant for us to be strangers. My day school teachers struggled too. Didn’t they know it could be strange for some strangers to hear their rabbi denigrate other religions?! Especially when: “That’s my grandparents you’re talking about!”

But I was always a “good little stranger,” not wanting to challenge authority. My younger brother was less forgiving.

When you’re a stranger, the “other” is still family. And you gotta step up for family. Even if it means regular trips to the principal.

There are times when it’s hard to feel at home as a stranger. After all, who wants to be a stranger in a community that looks down on strangers? You’re a “stranger” in your new community, and your old family thinks you are most definitely strange.

In my family, I am among the strangest of all. That’s because I’m not just a stranger, I’m also a rabbi-stranger.

At my Nana’s funeral, the family thought it would be fitting for me to deliver the eulogy. After all, I’m clergy.

This was going to be strange. I don’t enter churches. This would really be my first time… and last. So I had to do it right. I stashed my guitar under the altar before the service. I returned after Mass, rose for my eulogy, and taught everyone Reb Shlomo’s, “Return Again, Return Again, Return to the Land of your Soul.”

I had sung these words with my wife at Nana’s bedside the days before she passed. Now the family was singing it in the limousines on the way to the cemetery. And that didn’t feel strange at all.

In the rabbinate, I found myself connecting to other strangers like me. Stranger-dom is bizarrely magnetic.

I took over the stranger program at the first shul I served. It was immensely fulfilling helping people become the strangers they aspired to be. Little children, adopted. Grown men and women. Entire families.

Who knew that so many people wanted to be strange like me?!

A few times, I even stood as one of the three men by the little blue tiled pool; tears welling up in my eyes, appreciating the sacrifice and commitment on display.

But that’s when I was reminded that I was a stranger. And strangers can’t help other strangers become strange. At least, that’s what the machmirim (the strict ones) say.

Ger Dan Ger Chaveiro! I could help in cases of monetary dispute, but not with matters of personal status. No stranger is good enough for that. At least, that’s what the machmirim say. The few times I had helped a fellow stranger were in vain. They apparently never became strange at all, and had to take another swim. Despite my love for strangers; despite my understanding of stranger-dom; since I’m a stranger, one interpretation of Halakhah says that I am not supposed to make more strangers.

Still, I find a way to guide the strangers among us, and bring them to certain non-strangers, who make sure there is a still an open path to stranger-dom, that is compassionate, transparent, and marked by integrity.

We were once taught not to remind strangers that they’re strange. It’s only their business to share. But it seems now that we demand to know who the strangers are, and we judge if they’re even strange enough for us.

Perhaps we should remember our history; the time when we were all strangers, and treated that way. Does our past not deepen our sensitivity to the strangers among us now?

We are a nation commanded to love strange people. Not to oppress them, take advantage of them, or abuse them. Not to make their path so convoluted and uncertain. But to honor them, uplift them, and be inspired by them.

Let’s remember, that our nation is full of strangers. And by the way, not just strangers like me. They get even stranger! And we need to learn to love them too.

The above narrative poem was a read on Tisha B’Av at the author’s synagogue, as part of a program exploring “The Pain of the Stranger.”

About the Author
Uri Topolosky is the Rabbi of the Kehilat Pardes - The Rock Creek Synagogue in Rockville, MD. He also serves as the Rav HaKehillah of the Berman Hebrew Academy, the chair of the Beltway Vaad, and the President of the Washington Board of Rabbis. He was formerly the Rabbi of Congregation Beth Israel in New Orleans, where he helped revitalize a community shattered by Hurricane Katrina. Uri received his rabbinic ordination at Yeshivat Chovevei Torah Rabbinical School and was a member of the second graduating class in 2005.
Related Topics
Related Posts
Comments