After being attacked on Friday, I didn’t have time to write a dvar Torah (commentary) on last week’s Torah portion. Sunday was filled with interviews and hours with the police. I preferred not to write about the attack on Holocaust and Resistance Remembrance Day (Monday). So, please forgive me that only now I am writing about the connection between Friday’s awful events, and last week’s Torah portion, Parashat Shemini.

For those of you who didn’t see the reports carried by most Israeli news outlets, I was one of 14 Israeli activists together with Palestinian shepherds from Uja village in the Jordan Valley who were attacked by Israelis who descended on us from the “Baladim” outpost near the Kochav HaShahar settlement. We were attacked with iron bars, wooden sticks and stones. Some of the stones were quite large, thrown at us with two hands from close range, and could have crushed somebody’s skull. At one point I heard one of them shout, “Don’t kill them,” and they finally turned around.

One activist suffered a head injury and a serious blow to his rib cage. A second activist had his arm broken as he tried to protect himself from one of those huge rocks aimed at his head. I escaped with an arm that needed to be stitched up, have some ugly bruises on my hip and calf, and my head still hurts a bit from getting hit with an iron bar. When I look at the video, I am amazed I was still standing after that hit. People have always said that I am hardheaded. 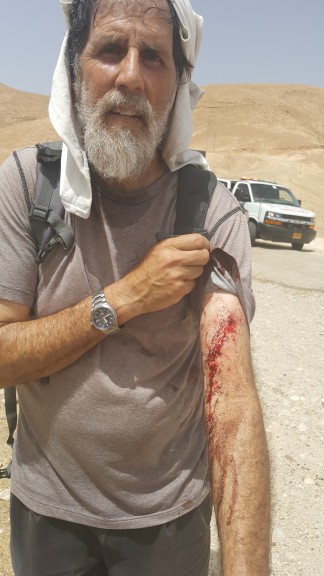 We had come to accompany the shepherds in order to allow them to actualize the basic right to earn a living. From year to year the growing number of settlements and outposts increasingly prevent them from accessing a larger and larger percentage of the lands where they used to graze their flocks freely.

Therefore, for the last two Fridays I joined “Ta’ayush” and “EcoME” in accompanying the Uja shepherds to an area where they were shot at a year ago. They had been afraid to graze there ever since. I should also point out that we were over a kilometer away from the outpost. The attackers had to make a real effort to get to us. The previous week Israelis had descended as well, but they stopped several hundred meters from us. They then ran off to throw stones at the `Israeli security forces we had called. This past Friday, the cavalry didn’t arrive in time. We took a beating, acting as human shields, allowing the flocks to escape.

We will be back. And, this Friday, Members of Knesset will be joining a large group of Israelis in touring the area.

The hilltop youth of the Baladim outpost (In all likelihood the attackers were from the outpost) are disavowed by most of the settlement movement, and their outpost has been dismantled several times. However, they cannot be simply dismissed as “wild weeds.” I was on the radio with the spokeswoman from Kochav HaShahar on Sunday. She took great pains to distance her settlement from the outpost. I accepted this, but pointed out that the Baladim are only the latest troubles for the Uja shepherds. Once upon a time, they grazed their flocks in areas where the presence of Kochav HaShahar now prevents them from reaching. Add to that the Havat Omer and Mevot Yericho in the other direction. Then, consider the fact that the spring that used to make Uja known for bananas is now diverted for settler use… The noose tightens around the necks of Uja residents year by year, making it more and more difficult for these simple people to eke out a living. Many have no choice but to work in the same settlements whose presence has made it impossible for them to earn a living any other way.

Uja is but one example of many, where the mere presence of an increasing number of settlements and outposts makes survival increasingly challenging, even if the settlers do no more than demand restrictions on Palestinian movement and access to their lands for security reasons.

For that, our entire society shares responsibility. From year after year nobody has said a word as the pasture area of Uja shepherds has been systematically reduced. Successive governments have given massive support to the settlement enterprise.

If the hilltop youth are only a handful of people, and the real problem is much larger than them, perhaps we should simply be making an effort to protect ourselves from them, and not pay them too much attention. However, if we want to stop them, we must take responsibility for the fact that we are creating them. They are a golem sh’kam al yotzro (legendary beings created from clay by various rabbis. Like Frankenstein’s monster, many of them eventually turn on their creators.) Our society created the hilltop youth by supporting the settlement movement. True, many of them are ne’er-do-wells who have not succeeded in any framework, don’t even respect their parents who founded the settlements, and don’t accept the authority of settler rabbis. However, some have inspired them and taught them. Others look the other way.  In the best of the yeshivot young people are recruited.

Rabbi Abraham Joshua Heschel was wont to say, “Some are guilty. All are responsible.” In many of the golem legends, their creators assume responsibility, and find ways to stop the golems.

Furthermore, the hilltop youth are a reminder of what we might become because they have learned from their parents, and gone a few steps further. It is the old adage that “absolute power corrupts absolutely.  It may well be that the hilltop youth are the inevitable result of 50 years of absolute rule over another people, making one sided decisions every day.

A friend of mine once had a conflict with her neighbor over ownership of a garden. The police said it was hers. The daughter of the neighbor lived in the Kiryat Arba settlement and came to visit.  She told her mother, “Who cares what the police say.  Let me show you how it’s done.”

The hilltop youth grew up seeing how absolute power is used to control every aspect of Palestinian life for their welfare. The law is manipulated to support settlements and “legally” take over Palestinian land. We “legally” decide where Palestinians can (or usually can’t) build, and demolish “illegal” homes. We control their movement and patrol their communities. We control aspects of their lives that arguably are connected to security, but many aspects of civilian life that have nothing to do with security and everything to do with how much of the Occupied Territories is for Palestinian use and how much for Israeli use. We place settlements in areas that create new excuses to further restrict Palestinians in the name of security.  When the government is with them, they exploit that. When the government is not with them, they will try to outwit the government in the name of a higher truth. David Beeri, the leader of the Elad settlement organization in Silwan/City of David, who will receive the Israel Prize for his life’s work in a few days, has been recorded bragging about how he deceived government officials in order to continue the work of digging underneath the homes of Palestinians. By giving him this prize we are telling our young people that he is a role model. His deceitful behavior is to be emulated.

So, how does all of this connect to Parashat Shemini? In last week’s Torah portion, we read of the deaths of Nadav and Avihu, two of the sons of Aaron the High Priest.  Immediately after the dedication of the tabernacle we traveled with in the desert, they offer “Aish zara,” a strange or idolatrous or unholy fire that God did not command.  Fire erupts from the altar, and consumes them. There are many and varied explanations offered by our rabbis.  Many find various moral flaws in Nadav and Avihu.  For example, just like the hilltop youth who do not respect parents or rabbis, some claim that Nadav and Avihu were very conceited, saying to each other, “When will our parents die, so that we can become the leaders.” However, there are also those who claim that they were so full of genuine holy fervor that they didn’t know how to set limits.  The fact is that these are not necessarily contradictions. If Nadav and Avihu were both full of conceit and truly had holy fervor, they may have seen themselves as exempt from the rules that govern the rest of us.

I don’t think I know anybody who worships idols. Most of us know the danger of worshiping wealth and power. However, we are much less aware of the dangers of assigning disproportionate value to that which is truly holy. The hilltop youth, and much of the settlement movement and their supporters, are filled with holy fervor and blinded by the holiness of the Land of Israel. They are so blinded that they set no limits to what is permissible in the name of possessing and settling the entire Land. Their passion becomes idolatrous eish zara. I will argue with anybody who denies the historical and theological centrality of the Land of Israel to the Jewish people. However as sacred has the Land of Israel is to me and to the Jewish people, it becomes avodah zara (Idolatry) when we elevate it over every other value. The Land was not created in God’s Image. Those Palestinian shepherds were.

We are also in the period of the counting of the Omer, between Passover and Shavuot. Although we are excitedly counting the days until we reach Sinai, at least through Lag B’Omer (The 33rd day) is considered a period of semi-mourning. We are taught that 24,000 students of Rabbi Akiva died from a plague because they treated each other disrespectfully. I don’t think that I and the hilltop youth have the same rabbi, but the lesson remains true. The hate inspired by the love for the Land of Israel is truly a plague.

As Yom HaAtzmaut (Israeli Independence Day) approaches, we must recall how those things stir in us deep emotions because we rightfully hold them dear — the flag, peoplehood, the national anthem, the Land, pose the most danger of becoming eish zara. As we count the Omer, we must remember to focus on Sinai, not on love inspired hate. And, as Rabbi Shimshon Raphael Hirsch will remind us when we read of the omer in Parashat Emor, we must remember that freedom and independence are not the ultimate goal, but the point at which we begin our journey to Sinai.