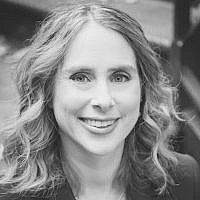 The Blogs
Jill Jacobs
Apply for a Blog
Advertisement
Please note that the posts on The Blogs are contributed by third parties. The opinions, facts and any media content in them are presented solely by the authors, and neither The Times of Israel nor its partners assume any responsibility for them. Please contact us in case of abuse. In case of abuse,
Report this post. 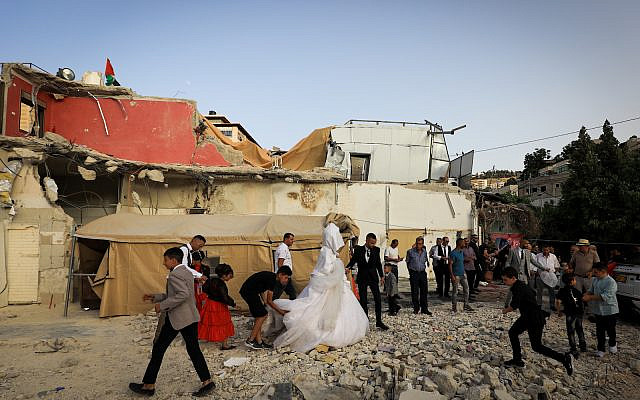 Illustrative: A Palestinian couple celebrate their wedding at a building that was demolished by Israeli authorities, in the East Jerusalem neighbourhood of Silwan, on June 11, 2022 (Jamal Awad/Flash90)

I have heard few sounds as ugly as the incessant scraping of a bulldozer hitting the home of a newlywed couple.

A few weeks ago, I stood in al-Walaja, a village in East Jerusalem, watching an Israeli bulldozer slowly and systematically destroy a young family’s home. I had come there with a group of Israeli human rights leaders and an Israeli rabbinic colleague to learn from representatives of the village council about their efforts to prevent such demolitions. We planned the visit expecting the mood to be celebratory — just weeks before, the residents, working with the Israeli NGOs Ir Amim and Bimkom, had won a huge victory when the High Court issued a decision to freeze demolition orders on 38 homes for seven months in order to give the residents the opportunity to present a master plan for the village.

And yet, when we arrived, the council representatives who greeted us told us that a bulldozer had unexpectedly come a moment before in order to demolish one of the homes not covered by the freeze order — a family home recently renovated by a newlywed couple as their first house. We rushed to the site and watched in tears, as the bulldozer did its work, with Israeli soldiers — some only teenagers — standing guard.

These demolitions destroy the lives of real people. They entrench and expand occupation. They serve no security purpose, but only engender hatred. And they make it so much harder to achieve a just solution that protects the human rights of everyone, both Israelis and Palestinians, living within that piece of land. And yet, the many American Jewish institutions that claim to support a two-state solution have remained silent.

Al-Walaja straddles the boundary between East Jerusalem and Area C, the area of the West Bank under full Israeli civil and military control, and where all the settlements are located. Walking through the village, one would not know where Jerusalem ends and the West Bank begins, and yet the two sides of the village fall under different legal authorities.

In Area C, there is a master plan for the village and therefore no immediate threat of demolition. But the more than 1,500 people who live on the Jerusalem side find themselves in a catch-22. Ordinarily, it is the responsibility of the municipality to create a master plan for a given neighborhood. However, in the case of al-Walaja, the Jerusalem municipality has declined to do so. Therefore, residents cannot acquire building permits, and so every new construction — or in this case, renovation — is illegal and subject to demolition. The High Court victory was an important one — and yet, also highlighted the fact that the municipality has not done its duty to create a master plan, and that therefore the burden, including significant financial cost, is falling on the village.

Even as we sat in al-Walaja mourning the demolition of a home there, we heard news that Israel had also carried out demolitions that morning of multiple buildings, including family homes, in al-Mirkez and al-Fakhet, two of the 12 villages that make up Masafer Yatta in the West Bank, an area I had visited just the day before. This action followed a recent High Court ruling that determined a 30-year-old demolition order on eight Masafer Yatta villages could stand because these villages were located in what is now an IDF firing zone. And again, the majority of American Jewish communal institutions have remained silent.

And yet, as homes are demolished or under threat of demolition in al-Walaja, Masafer Yatta, Silwan, and elsewhere, we have heard almost nothing from most of the mainstream Jewish organizations like Conference of Presidents, American Jewish Committee, the Anti-Defamation League, AIPAC, JFNA, and others that claim, on paper, to support two states. One would think that anyone who actually supports two states would be actively fighting any attempt to appropriate the land that would make possible a Palestinian state, side by side with the Jewish State of Israel.

Fighting such demolitions certainly does not make one anti-Israel. Indeed, quite the opposite. As the Israeli human rights organizations and activists who oppose these demolitions know, the long-term survival of the State of Israel within internationally recognized borders is only possible if Palestinians, like Jews, also can realize their national aspirations.

If American Jewish organizations truly support two states as a means of achieving peace, they need to back those words with money and action. That means affirming our long-term commitment to Israel as a home for the Jewish people and affirming that Palestinians have the same right to self-determination and other human rights that Jews have. It means refusing to allow our philanthropic donations or our tourist dollars to support extremism and the expansion of settlements. It means advocating for the Two-State Act in the US Congress and for an end to the coddling of settlers in the Knesset. It means advocating to the Biden administration to put pressure on Israel to stop the demolitions and evictions, and to marshal our relationships inside the Israeli government to do the same.

And it means making clear that fighting occupation, demolitions, and evictions is not antisemitic, but is rather the only way to achieve the two-state peace that mainstream organizations claim to support.

About the Author
Rabbi Jill Jacobs is the CEO of T’ruah: The Rabbinic Call for Human Rights, which mobilizes a network of 2,300 rabbis and our Jewish communities to protect and advance human rights in North America, Israel, and the occupied Palestinian territories.
Related Topics
Related Posts
Jill Jacobs