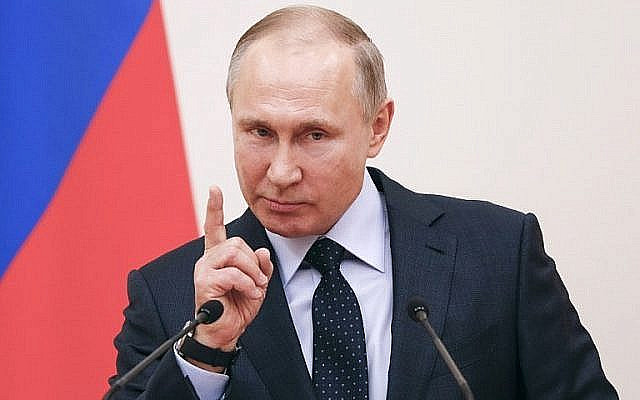 At the Tel Aviv premiere screening of Bernard-Henri Levy’s Ukraine film, I was struck by the overpowering one-sidedness of what purported to be a documentary. I asked the French “public intellectual” whether there is truly no need for a dialectic that might at least try to present Russia’s case.

He argued that, while making “Why Ukraine,” he felt the Ukrainians were perhaps not saints, but were facing a form of evil so rare and clear that the world’s welfare depends on their triumph. This put me in a contemplative frame of mind.

I spent decades as a foreign correspondent, and this is a subspecies that recoils from notions of good and evil. The dichotomy seems too schematic; the labels too credulous. It complicates the imperative of having coverage be balanced, like a quadratic equation. Yes — it feels more right to view all situations on a sliding scale with everything a matter of degree, not principle, and most players bunched up in the middle. Having discovered this, professional liars are busily selling the lie known as “everybody lies.”

Could Levy have a point about Ukraine?

Russia is clearly the aggressor, and its actions since invading Ukraine in February carry about them the stench of war crimes. The arguments Vladimir Putin has put forth most energetically, such as the need to save ethnic Russians from genocide, are not convincing; it looks like a land grab – of lands that have mineral wealth and access to the sea, which has always been a Russian obsession.

But there is another hand. The internal borders of the Soviet Union were purposely scrambled to create non-homogeneous republics filled with ethnic Russians that would have trouble functioning as countries. Thus are ethnic-Romanian Moldova, the non-Russian Baltics, Georgia and Kazakhstan all saddled with Slavs, and  Azerbaijan with Armenians. Russia is not crazy to want some of these areas back, and it may not be stupid for these countries to comply; they are a post-Soviet version of a “demographic problem” with which Israelis will be familiar.

Moreover, Russia is not crazy to look askance at NATO expanding to its “near abroad” – first Poland and Romania, and now perhaps Ukraine. The United States would not have allowed Mexico to join the Warsaw Pact, nor would want it today to have a military alliance with Russia.

No, the issue is otherwise with Russia and Ukraine – and as befits our celebrity age it is a matter of personality. The issue is Putin. The more one reflects on this problematic fellow, the clearer it becomes that he is offering storytellers the world over a twisted form of gift: a global political leader who is about as close as we come to a cartoon villain. We have not seen his equal since World War II; Castro and even Mao might compete, but fall far short.

For starters, we are talking about a person who comes from the KGB. That is foreboding, which every superhero movie will require. Next we have the fact that he succeeded Boris Yeltsin, which provides a form of comedic misdirection.

Yeltsin had a heroic moment atop a tank, but the credit for dissolving Communism goes to the recently departed Mikhail Gorbachev. Yeltsin will be remembered for bungling privatization and market reform, and for being one of modern history’s famous public drunks. Whereas history is supposed to bend from tragedy to farce, in a storytelling masterstroke it here has been reversed. Putin inherited a shambolic atmosphere receptive to his brand of burrowed-brow authoritarianism.

But Putin did not suffice merely with gaming elections, locking up opponents, inventing charges against non-compliant oligarchs in fake courts, or rewriting constitutions to keep himself in power. Nor with having his regime be accused of a role in shooting down a Malaysian passenger jet over Ukraine, with allying with  the likes of Syria’s Bashar Assad, or even with machinating for Brexit and the likes of the French xenophobe Marine Le Pen and America’s Donald Trump.

This is all impressive dictator material, but in a fascinating branding exercise Putin went the extra mile. He went for genuine cartoon villainy.

I am talking about pesky journalists found dead in elevators (Anna Politkovskaya), rogue spies poisoned in faraway cities (Alexander Litvinenko), opposition leaders gunned down on bridges (Boris Nemtsov), disfiguring irradiation of inconvenient foreign leaders (Viktor Yuschenko), and poison being allegedly sprinkled in the underwear of  the opposition leader (Aleksei Navalny). I am talking about reportedly building a $1.3 billion palace for himself that would befit the head of James Bond’s Spectre.

This kind of character development is now visible in the conduct of the war in Ukraine. It is one thing for Putin to be waging a war of aggression on largely false pretenses in a manner that is brutal and probably illegal. But his actions go far further.

For starters, we have the not-so-veiled threats to use nuclear weapons, which broke a taboo on uttering such things that has been in place since Hiroshima and Nagasaki. The fact that Putin did that is certainly behind much of the bad karma plaguing the world in 2022.

That’s riveting, but certainly not the whole story. The head of Spectre goes about his business with deliberate methodology that is not just cruel but also pointlessly slow – strapping the hero to a contraption involving a slowly descending circular buzzes while he chortles, strokes a cat and makes a little speech.

And that is what we see in the conduct of the war.

This goes beyond war crimes. So much of it is needless. It reminds viewers of the villain in Westerns who fires on people who are tied up, because he wants to be not just feared but also truly hated.

Putin has a sort-of mirror image in Volodymyr Zelensky. The Ukrainian president is certainly no Mother Theresa: there have some Putinesque purges, reports of surprising and suspicious wealth, and the ban on Ukrainian men leaving the country may be somehow understandable but is really not very nice. Moreover, his insistence on keeping every inch of Ukraine that had been awarded it by Stalin may not be very wise; I and others have argued that Ukraine is better off ditching areas that are heavily populated with Russians.

But there is no denying that his choice to stay on and lead the fight has been heroic and his story arc is the stuff of future legend: he went from a youth on Dancing with the Stars to leading a production company whose main hit was a show in which he played a teacher who bumbles his way to he presidency to actually getting elected, despite being Jewish and short in a land of Slavic giants.

That’s enough of a contrast, I suppose, to convince Bernard-Henri Levy. It may also be good enough for me. 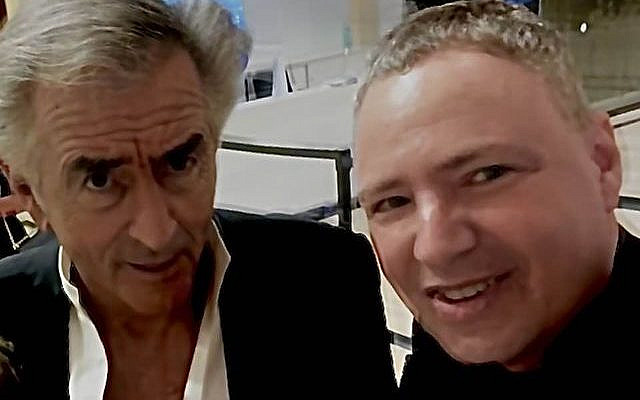 The author and the intellectual BHL at the Ukraine film premier. (courtesy)
About the Author
Dan Perry is the former Cairo-based Middle East editor and London-based Europe/Africa editor of the Associated Press, served as chairman of the Foreign Press Association in Jerusalem, and authored two books about Israel. A technologist by education, he is the Chief Business Development Officer of the adtech company Engageya and Managing Partner of the award-winning communications firm Thunder11. His Substack, Ask Questions Later, is available for subscribers at https://danperry.substack.com/. Also follow him at twitter.com/perry_dan; www.linkedin.com/in/danperry1; www.instagram.com/danperry63; www.facebook.com/DanPerryWriter/; and https://muckrack.com/dan_perry
Related Topics
Related Posts