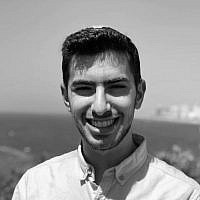 The Blogs
Noam Fruchter
Apply for a Blog
Advertisement
Please note that the posts on The Blogs are contributed by third parties. The opinions, facts and any media content in them are presented solely by the authors, and neither The Times of Israel nor its partners assume any responsibility for them. Please contact us in case of abuse. In case of abuse,
Report this post.

On May 15th, 2022, CAMERA on Campus hosted an event with speaker Maurice Hirsch, Head Legal Strategist for Palestinian Media Watch at Hebrew University. As part of the event, Maurice described the historical aspects of how Arab leaders created the Palestinian narrative after 1948 that holds the Jewish state solely responsible for the plight of Palestinians. Maurice also gave a perspective of how Israel has not only been affected by bias on the world stage but on college campuses.

During the 1948 War of Independence, the newly established government of Israel faced five large Arab armies who wished to annihilate the Jewish state. The war resulted in a significant refugee crisis, especially for the Mizrachi Jewish communities, with 850,000 Jews forcibly exiled from Muslim countries. In contrast, Jewish leaders pleaded for their Arab neighbors in Haifa, Jaffa, and Tiberias to stay. Despite this, Arab leaders heavily encouraged their people to flee, sometimes voluntarily and sometimes with force.

Maurice explained that this false narrative surrounding the Palestinian refugee crisis has evolved in the past 74 years to acutely demonize the State of Israel and weaponize the international response to the Arab-Israeli conflict against Israel.

In 2021, with the financial backing of Iran and Iran’s terrorist proxy, Hezbollah, Hamas was able to fire over 4,000 rockets at Israeli kindergartens, commercial centers, and homes. Over 20,000 missiles have been shot indiscriminately at Israeli population centers by Hamas since 2001. According to international law, this is a war crime. The media does not mention that Hamas fired rockets from population centers while not protecting its citizens and killed their civilians, including children, when their rockets misfired. It is shocking to learn that several children and teenagers were actively part of the terror group’s military wing.

As part of their “summer camps,” Hamas actively enlists children “to continue waging jihad against Israel” and to “be ready to make sacrifices.” The UN ratified that if an entity enlists children under 18 to participate in an armed conflict, it is considered a war crime. Ironically in June 2021, the UN wrote a report accusing Israel of killing and maiming Palestinian children while completely ignoring the severe violations of Hamas and Palestinian Islamic Jihad (PIJ) use of child soldiers. The International Legal Forum, a human rights legal group, based in Israel, has even pleaded to UNICEF to investigate this serious matter.

Far-left American Jewish organizations Jewish Voice for Peace and J Street promote the narrative of Palestinian victimhood at the hand of the State of Israel. Ironically, these Jewish representatives use past Jewish suffering to gaslight people into thinking that Israel is the oppressor.

The Jewish state constantly suffers from threats of destruction, as their foes make it clear that they want to eliminate Israel. Nevertheless, JVP and J Street will do anything to appease their social circles to gain a seat at the table of progressives. It is most upsetting when they use the same anti-Semitic tropes used by anti-Semites against Israel. When JVP promotes these grotesque images on social media, it raises the question of whether they comprehend that it is not only Jewish students but also the Jewish population at large that is affected. The spread of such canards has incited attacks against Jews across the United States, including physical assaults and vandalism. Anti-Zionists claim they only criticize Israeli policies and are not anti-Semites; however, the opposite is true. By creating the Mapping Project in Massachusetts, BDS selectively targeted not only Israel-affiliated institutions but also Jewish schools, synagogues, and Jewish organizations. According to the ADL, in 2021, levels of antisemitism reached an all-time high, a drastic rise in the United States.

Since the start of 2022, when terrorist attacks murdered over 19 Israelis, Jewish students in Israel have become fearful of coming to campus. More than ever before, in Israel, tensions are boiling over between Jewish and Arab students. Recently at Betzalel Academy of Arts and Design, an Arab student praised one of the Bnei Brak terrorists on social media. Similarly, at Hebrew University Mount Scopus, anti-Israel students screamed violent slurs to “expel the Zionists” and “hang the traitors” during protests. Jewish students were astonished by the school’s failure to reprimand these students. According to a Hebrew University Mount Scopus student, the university’s vice president asked police officers at a protest to leave “so that the atmosphere does not heat up.”

At an event dedicated to Nakba Day at Tel-Aviv University, three Arab students were arrested for attacking pro-Israel activists. At Ben-Gurion University, a Druze student was banned from bringing an Israeli flag; a ban, he alleged, was ordered by the university administration. The same institution took no action against a student who posted “Death to Israel” on social media. It is becoming apparent that anti-Israel students are establishing themselves on Israeli campuses, destroying a sense of balance between Jewish and Arab students. Without university action to curb violent incitement, students will feel scared to be on campus. Even in Israel, it is frightening to think that Jewish students are terrified to voice their opinions for fear of retaliation.

It is more crucial than ever to stand united against those who seek the destruction of Israel. The Jewish people have constantly been subjected to the same persecution regardless of political ideology. Today in the United States and Israel, anti-Semites are feeling complacent about attacking Jews or Jewish representation as a way to promote their anti-Semitic ideology. As Dara Horn, author of “People Love Dead Jews,” reminds us, “The freedoms that we cherish are meaningless without our commitment to one another.” As a people, we know very clearly in history not to entrust our fate to other nations. The Jewish people need to show our enemies that we are not a force to be reckoned with to preserve our existence and continuity in the world.

About the Author
Noam Fruchter is a 2021-2022 CAMERA Fellow at Hebrew University in Israel.