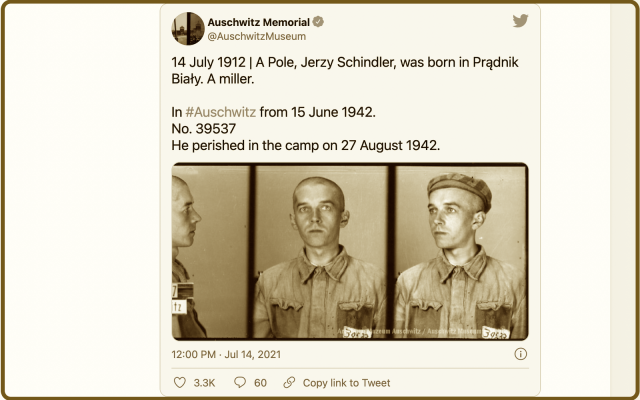 Throughout the 20th century, numerous intellectuals have sought to come to grips with the existence of the Auschwitz Concentration Camp. According to author Primo Levy, Auschwitz was its own universe. The laws that govern our universe, those of physics and mathematics, were suspended in Auschwitz. It was a place with its own language, moral codes, causality and a place where order was replaced by randomness.

Sociologist Zygmunt Bauman viewed Auschwitz as the apex of modernity and enlightenment. Scientific and technological advancements were used to create a new factory assembly line. Yet rather than create consumer goods, Auschwitz was a death factory, one whose creation rested on insights from biologists, psychologists, chemists and engineers.

For Susan Sontag, Auschwitz was a poignant example of how images of horrors ultimately lead to de-sensitization. The horrific images of the gas chambers are viewed time and again until they lose their ability to shock. They become visual clichés and are placed in history books that line peoples’ shelves or fireplaces.

Scholars in the fields of cultural memory have also paid attention to Auschwitz. Cultural memory rests on the assertion that what a society chooses to remember, and what it chooses to forget, is not the result of chance, but of choice. Societies are shaped by the events that they choose to relive. While certain events are forgotten, others are constantly summoned to the present and are used by societies to understand the world. These events become templates that characterize the past and illuminate the present. For instance, Western newspapers use the Cold War template to explain tensions between the US and China. The British Empire’s ‘last stand’ against Nazi Germany was invoked by British politicians to make sense of Brexit, while in America, wars in the Middle East are often explained through the quagmire in Vietnam.

Within the study of cultural memory, museums play an important role. Museums are used to celebrate a chosen past and to shape how the past is viewed in the present. Museums are the result of selection and emphasis as certain objects are presented as historic relics, while other objects are left boxed in the basement. The act of visiting a museum is in itself a social act as when individuals visit museums they absorb society’s choices pertaining to what to remember and what to forget. Museums also enable societies to reach the past. One can no longer talk to veterans of WWI. The horrors of the Great War can only be communicated through images and artworks that are exhibited in museum hallways. Importantly, museums and memorials are also public diplomacy actors that shape how local and global publics make sense of the past.

In the digital age, museum and memorials sites undergo a process of digitalization. Memorial sites in particular use digital tools to shape societal memories. One prime example is the Twitter account of the Auschwitz memorial. This account tweets the stories of inmates on a daily basis. Mostly depicted in black and white images, and often wearing the Camp’s infamous striped uniform, the memorial uses photos and short biographies to tell the Camp’s story and to shape how the Camp’s history is understood by present generations. Like museum curators, Auschwitz’s digital curators are also faced with a choice as to who to remember and who to forget.

It should be mentioned that the Polish government is currently engrossed in the task of reshaping the memory of Poland’s role in WWII. In recent years, the Polish Ministry of Foreign Affairs and embassies have dedicated considerable digital resources to narrating Poland’s story during WWII and distancing Poland from Nazi atrocities. In the Polish digital account, Poland was the first victim of Nazi Germany. Poland was occupied for five years during which a brutal Nazi regime terrorized the Polish population. Poland also lost the largest amount of Jewish citizens, approximately 3 million Polish Jews were murdered by the Nazis. Most importantly, according to the Polish digital campaign, Poles took no part in the extermination of the Jews. Far from it. The Polish resistance and average Poles risked their lives to save Jews. As language shapes memory, Polish diplomats and embassies berate publications that use the term ‘Polish Death Camps’ and demand that the phrase be substituted with ‘German Death Camps on occupied Polish soil.’

An interesting question is whether the Auschwitz memorial also takes part in disseminating the Polish government’s narrative of WWII? This would not be surprising given that museums and memorial sites are tools through which nations shape memories and perceptions of the past. To answer this question, I analyzed 140 tweets published by the Auschwitz Memorial during July of 2021. Results indicate that the Memorial emphasizes the plight of Polish citizens during WWII, the horrific price paid by Poland during the Nazi occupation, and commemorates Poles who died in the camp. 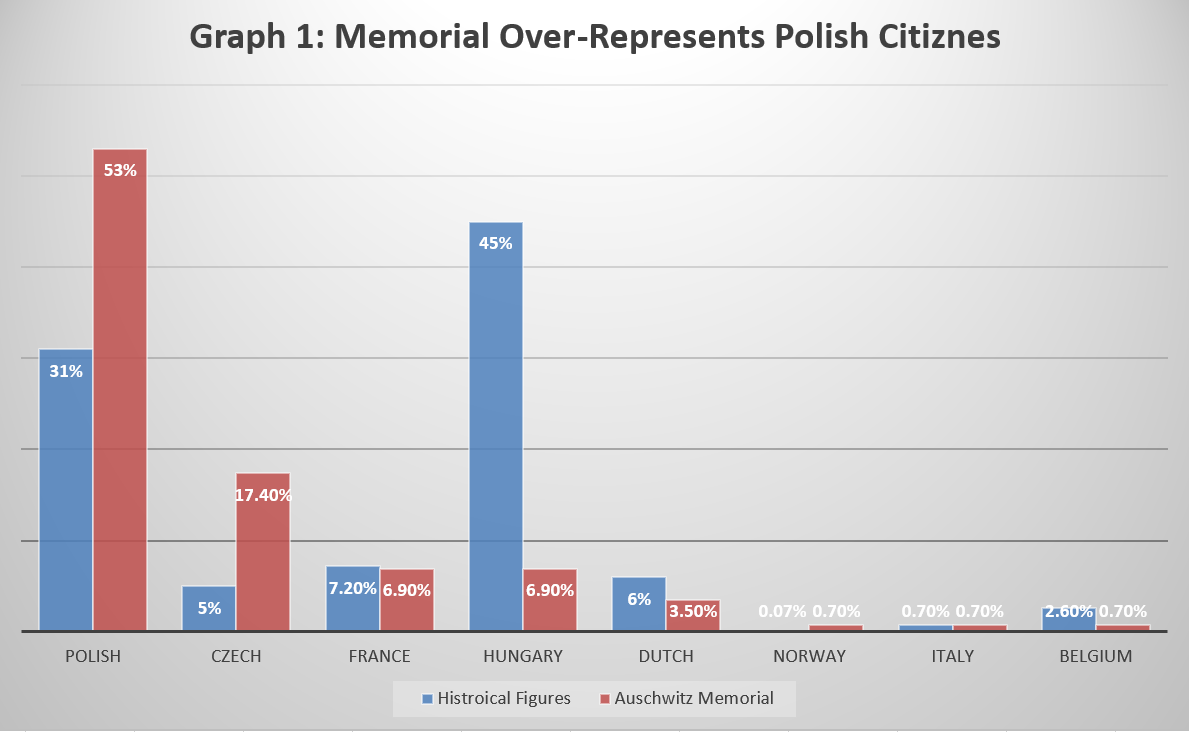 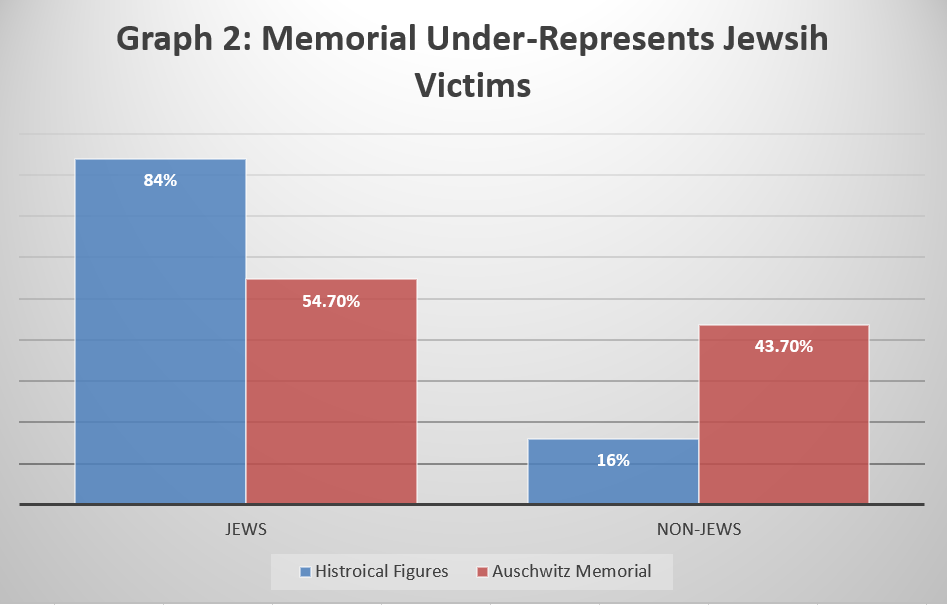 Notably, the memorial often features the biographies of average Poles who were killed at Auschwitz including city clerks, engineers, waiters and more. Thus, what the Memorial chooses is to remember the many Poles (Jews and non-Jews) that died at the Camp. What it chooses to forget is that the overwhelming majority of these Poles were Jews. It also chooses to forget that while it was situated in Poland, Auschwitz was not a ‘Polish’ camp. This death factory housed hundreds of thousands of Hungarians, tens of thousands of French, Greek, Slovak and Belgian Jews as well as thousands of Italian Jews. It was a global epicenter of an extermination project that was connected to the world through a modern system of railways.

The Auschwitz Memorial’s Twitter account manifests the challenges that digitalization brings with it, especially when one considers that digital accounts speak to a global society, rather than a national one. Twitter users throughout the world are exposed to the Memorial’s narration of history, one that seems skewed towards Polish, national narratives of the past. By presenting Auschwitz as a ‘Polish’ camp, the Memorial shapes how global audiences remember, and interpret both the Camp’s history and the history of WWII. In the digital and global age, museums and memorials must realize that their role has expanded greatly as they no longer shape local perceptions of the past, but the entire world’s perception of the past.

Heavy is the head that bears the responsibility of preserving historical memory.

About the Author
Dr. Ilan Manor (PhD Oxford University) is a diplomacy scholar at Tel Aviv University. Manor's recent book, The Digitalization of Diplomacy, explores how digital technologies have reshaped diplomatic practices. Manor has contributed to several publications including The Times of Israel, The Jerusalem Post, Haaretz and the Jewish Daily Forward. According to his Twitter bio, Manor is the inventor of the ashtray. He blogs at www.digdipblog.com
Related Topics
Related Posts
Comments
Advertisement