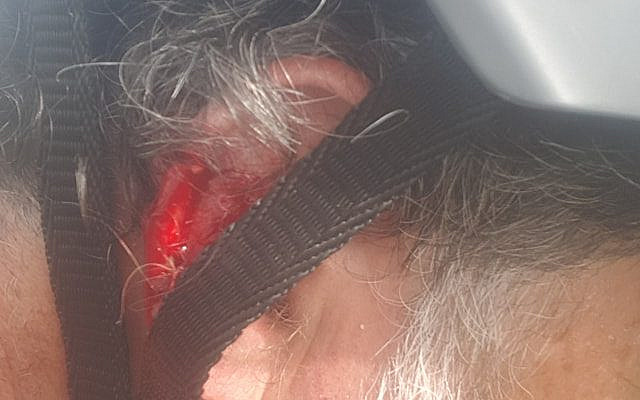 Getting my ear ripped while stopping settler thieves last Sunday landed me in the emergency room, but the legitimization of Kahanism and various other evils in our elections left me with much greater fear in the pit of my stomach. Passover is a reminder that it can be darkest before the dawn if we don’t let our fears paralyze us.

Last Sunday I ended up in the emergency room to have my ear stitched up and to make sure that my arm wasn’t broken. This was the latest and most serious of many attacks in the last few weeks. I’ve lost count, but have submitted close to ten police complaints about attacks by the shepherds from the illegal even according to Israel outpost of Neriya ben Pazi. For those who have the stomach, you can click here for pictures a bit gorier than the what I am publishing here. I have not been the only victim, and of course the real victims are the Palestinians. The story is the same one I have told several times.  I know that I am getting repetitive, but I have put on hold, or doing the minimum necessary or handed over to others almost every other Torat Tzedek project to devote almost all of my time to stopping this evil.

Driven by an insatiable drive to dispossess Palestinians, Neriya’s flocks come on an almost daily basis to steal what others have planted in order to cause sufficient fear and financial loss to get the Bedouin to give up, and not come back to their summer homes to graze on what they planted. The settlers fulfill the Biblical canard, “Now this horde will lick clean all that is about us as an ox licks up what grows in the field.” (Numbers 22:4). For the past three years we have tried to get the army and police to save Bedouin families from intimidation and financial ruin.  I won’t even go into the unacceptable excuses we have been offered. And, if the arguments of the security forces held any water whatsoever, that ended on March 5th. The army’s own DCO (liason unit)  made it perfectly clear to the army, the  police and to Neriya that the area is private registered Palestinian land, and that the settlers are forbidden to bring their flocks to commit agricultural theft. (Hebrew). We believe that this is hugely significant, and hope that it will eventually induce the security forces to do their job. Short term, has this ruling changed the behavior of the settlers, or the responsiveness of the security forces?  Up until the attack, no.  Since the attack, the settlers have been keeping their distance.

“B’makom sh’eyn anashim, hishtadel l’hiot ish. Where nobody is acting with basic human decency, try to be the person who does.” (Pirkei Avot). When the security forces don’t stop the theft, we put ourselves at risk to nonviolently shoo the flocks out of the cultivated areas.

The settlers aren’t so nonviolent. On Sunday, a police officer did arrive after we reported agricultural theft in process, and the settlers started moving out of the cultivated area when they saw him coming. If the officer had identified and spoken with the settlers as I asked, that might have been the end of the story. He didn’t. As I told him would happen, the settlers moved into another cultivated field as soon as One of them knocked my cell phone out of my hand. As I recovered it, they managed to strike a strong blow with a thick staff just under my helmet. (You don’t actually see the blow, but it happens around minute 1:40.

On election day I was the chair of a polling station in the Jewish Quarter of Jerusalem’s Old City.  Normally a stronghold of the Ashkenazi ultra Orthodox “United Torah Judaism” party, this year the votes were split almost straight down the middle between UTJ and the Religious Zionism party of Bezalel Smotrich running in a Netanyahu brokered coalition with Itamar Ben Gvir’s “Jewish Power” party and Avi Maoz’s “Noam.” Ben Gvir has seen himself as the disciple of Meir Kahane, and reportedly until recently had a picture of the mass murderer of Palestinians Baruch Goldstein hanging in his home. Meir Kahane’s party was the only party ever barred from running for the Knesset because of its racism. For years, Ben Gvir has struggled for legitimacy, and now a significant percentage of Israelis seem to have granted it. Even more than the fear in the pit of my stomach that Religious Zionism might actually be part of a governing coalition that would move forward their various proposals to hamstring our judicial system, legalize outposts, and promote a homophobic agenda, I am dismayed about what Religious Zionism’s success says about what is happening to our society.

Our sages had differing views as to the spiritual condition of the Israelites on the eve of the Exodus. Some see slavery as a blast furnace that hardened and strengthened us. Others say that if God had waited any longer to free us, it would no longer have been possible to free us from our slave mentality or continue to maintain our identity. Perhaps both views are true then and now.  I continue to see great strength and goodness in my fellow Israelis. However, this week’s election points to an abandonment by many of what I believe to be the essential mission God has ordained for the Jewish people to champion values of justice and honoring God’s presence in the world and in every human being.

I was bandaged, but back in the field on Monday. A certain level of fear is healthy. Paralysis is not. I was in the field the day after the elections as well. We have work to do.

Just as God redeemed us from Egypt a minute before it was too late, we must believe that we can be redeemed from the spiritual nadir that this week’s elections indicate.  We certainly must channel Nakhahon’s willingness and faith to plunge into the waters. However, it will also require our ability to continue to see the goodness and strength in our fellow Israelis, and to work to actualize it. With some of the young settlers I talk to them about Reish Lakish, the bandit who changes his ways and becomes a great Talmudic rabbi. I tell them that I am sure they have it within them as well. Needless to say, we were also busy engaging the legal advisors for the army and the police about their obligations in light of the DCO’s March 5th decision.

Some ask me why we waste our time engaging the system. I am not naïve.  Cooperation between security forces and the settlers always exists, but is now at a level I have rarely seen in 25 years of human rights work. On the one hand, I continue to believe in the potential of our society.  On the other hand, I am not willing to let them off the hook, and will continue to demand that they uphold their obligations under international law, Israeli law, and my understanding of Judaism. With eyes wide open I see both the good and the spiritual decline.

Khag Sameakh. May this holiday liberate us from our fears. May we pass through the narrow straights that constrict our ability to see the good, and move into the open space of hope and possibility.