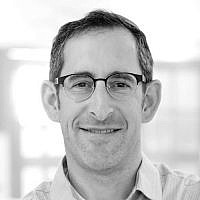 The Blogs
Alex Israel
Apply for a Blog
Please note that the posts on The Blogs are contributed by third parties. The opinions, facts and any media content in them are presented solely by the authors, and neither The Times of Israel nor its partners assume any responsibility for them. Please contact us in case of abuse. In case of abuse,
Report this post. 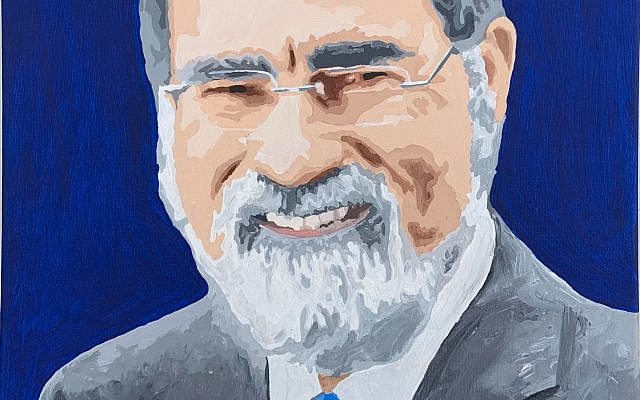 A Painting of Rabbi Sacks by Yali Miller. Instagram @hartworksbyyali

At the end of the shloshim (30 days of mourning) for Rabbi Sacks zt”l, an international siyum was held to mark the completion of learning of two cycles of the entire Mishna (Shas Mishna), one in the UK and one in Israel. I was asked by the organizers to say a few words in Rabbi Sacks’ memory. Here they are:

Josh – I saw you at your virtual Zoom “shiva”, but this I my first opportunity to personally express my condolences to the entire family, or maybe better put in the Hebrew phrase  – to share in your grief – להשתתף בצערכם. That “sharing” is of course a tonic for the soul.

Rabbi Sacks in his most recent book, quotes the Talmudic story of Rabbi Yochanan (Berachot 5b) who cannot arise from his sickbed alone, but when Rabbi Hanina extends his hand to help him, he manages to get up. Why? The Gemara explains:  אֵין חָבוּשׁ מַתִּיר עַצְמוֹ מִבֵּית הָאֲסוּרִים.  A prisoner cannot release himself from prison. In other words, when we are in a low and vulnerable situation, we find strength through the assistance, care and love of others. Due to Corona virus, we – myself and many thousands of others – have been unable to directly pay our respects to Rabbi Sacks, but I hope that the manifold tributes and the outpouring of love and grief has extended a virtual hand to you, dear family, and I hope that you are feeling that hands of the tens of people who studied mishnayot for this siyum to honor Rabbi Sacks’s memory. My hope is that all this will, in some dimension, ameliorate the pain of your enormous loss and your grief, and give you the wherewithal to rise.

After last night’s honourable tributes, I have been asking myself what is left to say. And so, I decided to be just me; to bring my perspective as a Talmid (student) of Rabbi Sacks.

Rabbi Sacks left this world so fast, so suddenly. I was searching for an analogy, an expression or an image that might express that and it came to me in dramatic scene in which the great Eliyahu Hanavi departed this world, suddenly soaring heavenwards in that famous fiery chariot while: וַחֲמִשִּׁים אִישׁ מִבְּנֵי הַנְּבִיאִים, הָלְכוּ, וַיַּעַמְדוּ מִנֶּגֶד, מֵרָחוֹק his students and followers look on from a distance:

“Suddenly a chariot of fire appeared with horses of fire, and separated the two of them; and Elijah went up by a whirlwind into heaven. And Elisha saw it, and he cried out, “אָבִ֣י אָבִ֗י רֶ֤כֶב יִשְׂרָאֵל֙ וּפָ֣רָשָׁ֔יו – My father! My father! The chariot of Israel and its horsemen!” And he saw him no more. He took hold of his own clothes and tore them.  He then picked up the mantle of Elijah that had fallen from him.” (2 Kings 2:12-14)

There are several features of this powerful and enigmatic episode to which we may relate.

The first is the supernal status of Eliyahu which seems to reflect the words that people have been using in their tributes to express their feelings about Rabbi Sacks – “transcendent”, “majestic”, “one in a generation”. These accolades are not generally employed to describe mortals who walk among us. And yet Rabbi Sacks with his grace and grandeur embodied that dimension which was larger than life, higher than our lives.

The second reflection are the circles of students and admirers who watch and experience Eliyahu’s departure from a distance and yet, who are shocked, confused, lost and hurting from the experience. They see Elijah suddenly disappear from sight, and they stand confused and bewildered, bruised and bereaved, wondering where to turn. That is the spirit that has animated us for this past thirty days.

In a way, I am a student at a distance, an atypical model of a Talmid. I did not – as Rabbi Sacks did with his Rav, Rav Rabinovitch – attend Rabbi Sacks’ shiurim, day in day out. I was a student at LSE, not Jews’ College in the 1980’s. But my friends and I would follow Rabbi Sacks around like groupies, from shul to shul, to hear every public lecture. He was mesmerising; we were star struck. Every lecture was yet another masterpiece.

Then came his books. I read Rabbi Sacks’ first book, Traditional Alternatives, feeling that that someone had just brought my world into focus, had explained the landscape in which I live, and the structure of my environment. And in more recent years, as Tanakh teacher myself living in Israel, I would often would begin reading a “Covenant and Conversation” not expecting to necessarily read anything exceptional, only to be blown away by a particularly creative reading, a surprising connection or a novel line of argument. His writings and teachings have given my Judaism and my vision structure and direction.

What is a Rav, a mentor? A Rav is a teacher, is a person who, after one has studied with him, or her, one sees the world entirely differently, who offers a new lens, a mode of thinking and processing, whereby you read Torah differently, see yourself and your mission in life anew. As Elisha said to his Rebbi, Elisha – “Avi! Avi!” – and Hazal say that as a father gives biological life to a child, a Rabbi gives spiritual life to a student, a religious and intellectual roadmap. That has been my experience and thousands along with me.

But then we must add the wonderful personal conversations which I was priveleged to have with Rabbi Sacks, filled with his warmth and kindness. There was the trust, the belief in us. As a young Bnei Akiva madrich or a budding smicha student, we did not know ourselves and hardly were aware of our abilities. In an Anglo Jewry at the time which frequently looked askance at unproved youth leaders, Rabbi Sacks was a breath of fresh air breathing wind into my sails. For me and so many other young Rabbanim, teachers, youth workers who are today communal leaders, who did not yet believe in ourselves, or who questioned our personal direction, Rabbi Sacks gave us confidence and energy, he challenged us to do more and told us that we could succeed, that we should contribute and lead. We believed in ourselves because he believed in us. For all this we are so thankful. We are his talmidim because through his books and teachings, through his counsel and personal example, he made us who we are.

But I am not finished with Eliyahu.

Elisha sees Elijah ascend to the heaven and he cries out אָבִ֣י אָבִ֗י רֶ֤כֶב יִשְׂרָאֵל֙ וּפָ֣רָשָׁ֔יו. “Father! Father! Israel’s chariot and its Horsemen”-  A very puzzling line. What does this mean? The commentaries explain that statement רֶ֤כֶב יִשְׂרָאֵל֙ וּפָ֣רָשָׁ֔יו is telling is that Eliyahu Hanavi’s prophecy, his leadership and speech was even more powerful than armies and chariots, his prayers, his ideas had more substance, his words more force than military might.

Here too we meet Rabbi Sacks – the  רֶ֤כֶב יִשְׂרָאֵל֙ וּפָ֣רָשָׁ֔יו – the great defender of Israel through his sweeping rhetoric, his overwhelming talent with words: Whether fighting anti-Semitism in the House of Lord or giving a shiur or a speech, his speech was uplifting and his message kindled the fire of inspiration. Like Elijah who represented God with such passion in the presence of kings and nation, he too fearlessly and proudly represented Judaism, God’s message to His people, and to the world.

The truth is that in several of his writings, Rabbi Sacks took issue with Eliyahu: Eliyahu was incapable, says Rabbi Sacks, of listening to the “kol demamah daka” – the small voice of God that you can hear only when you listen carefully. Rather, Rabbi Sacks envisioned God as trying to teach Eliyahu the art of listening. Likewise Rabbi Sacks in his hesped for Rabbi Norman Lamm z”l, says that Elijah accused the people for their mistakes, whereas he should have defended them, assisted them, educated and cared for them!

How fortunate then that Eliyahu gets a second chance, as articulated by Malakhi and many a Midrash, as the herald of the Mashiach. He who visits every Seder Table – as I might add, Rabbi Sacks is quoted at every Seder Table! In the end Elijah is the man who, according to the closing Mishna in Eduyot will come to:

This then is Elijah’s mantle, Elijah’s mission, which so evokes the spirit of Rabbi Sacks. And here is the catch. Because our Master is gone, as his students, we have to pick up our master’s mantle. We feel Rabbi Sacks’ legacy powerfully, and we want not only to spread his writings but to do our part in healing that fractured world by taking on his legacy of responsibility which he has left for us.