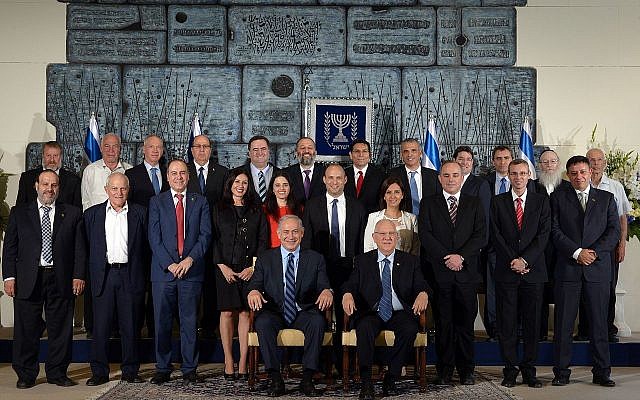 The thirty-fourth government of Israel at its initial formation together with President Rivlin, May 2015.

Israel’s Ambassador to the US, Ron Dermer, has said that he knew of the sexual harassment of and assaults on women by Prime Minister Netanyahu’s spokesmen, David Keyes’– apparently this was another of those “open secrets” which no one who could have done something did anything about; but that he did not report this to Netanyahu because there was no “criminal” action. By which, he appears to mean, official, legal, proceedings. Nothing criminal otherwise in sexual assaults on women.

If one ever needs an example of the old boys’ network and how it works, here we have it.

If Dermer had to fear sexual imposition every time he went to work; to a meeting; to get a cup of coffee or a meal with a colleague; to a work-related social event, you think he would require criminal charges and prosecution before insisting that the climate in which such behavior flourishes be cleaned out with bleach?

Here’s a message, Ambassador Dermer: ipso facto, it is criminal for a man to impose himself sexually on a woman.

I would be inclined to believe that Dermer told Netanyahu but is protecting him now with this astonishing excuse, denying that he reported; except that, since it doesn’t happen to them, to those in the Old Boys’ Network; and they know that it can’t and won’t, more likely he truly did not report it.

And now makes this absolutely pathetic admission of cover up, enablement, and collusion.

And stays in office.

And Netanyahu? Nothing. Not a word. He could say, innocent till, etc., but still announce: zero tolerance for degradation of the professional operation of my office and this government altogether (granted, this would be rich, coming from him, with all his corruption scandals. Still).

Look at the photos that come with reports of all this (and frankly, everything else)—of the Cabinet meetings, the announcement of this or that appointment or candidates for high offices– and it’s men, entirely men; a government of men with a sprinkling of women here and there. Entirely normal that power is male. Nothing wrong with this picture. In such an environment, when women are Other; a permanent, reliably permanent minority, no surprise that presumptions about male sexual license prevail.

Here’s what has to happen to begin to change this.

We are very far from a power structure in which half of positions are filled by women, which is what would truly change everything.

But first let us at least change the environment that assumes that sexual license is ok unless legal proceedings are underway. In other words, that it is normal, just part of business.

Change will only happen when women demand it. For that to happen, there must be strength in numbers, organization: we all know what happens to the individual woman who speaks up.

In this instance, the staff of the Embassy in Washington but also those of all Israeli Embassies and Consulates need to demand that there be a professional sexual harassment and abuse policy for the Israeli Foreign Ministry. That there be mandatory training for all, from the Foreign Minister (which right now, is Netanyahu), to Ambassadors and their aides, all the way “down” the ranks. That there be a declared policy of zero tolerance, and that it be implemented and enforced.

We need a Press Conference called by MKs and women in the Foreign Ministry, followed by a strike for the formulation and enforcement of strict policy, including safe reporting mechanisms and mandatory follow up. Proceedings that enter one’s personnel record.

Dermer’s statement is extraordinary in its cluelessness but not in essence. He felt comfortable making his astonishing statement because he lives in—and manages and maintains– an environment that accepts its presuppositions. And he is surely not alone in this.

The silence that envelops this affair is deafening. Time for women to make some real noise and change the rules, and the reality.