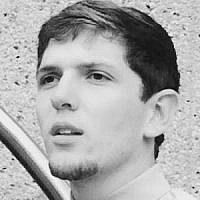 The Blogs
Simon Luxemburg
Apply for a Blog
Please note that the posts on The Blogs are contributed by third parties. The opinions, facts and any media content in them are presented solely by the authors, and neither The Times of Israel nor its partners assume any responsibility for them. Please contact us in case of abuse. In case of abuse,
Report this post.

A month ago, I woke up to an email from my school’s Study Away Office.  The email was quite routine: a quick message wishing all the students currently studying away from Connecticut College a great start to our respective semesters, and a request that we maintain communication with the office throughout our experiences.  But, the main topic of the email was an invitation for every student to “takeover” the office’s Instagram account (@cc_studyaway) at some point during the semester to show the account’s followers a more personalized view of our respective travels.  At first, I decided that I wouldn’t take the office up on their invitation — I was in fact new to Instagram and didn’t fully understand the enthusiasm that my fellow millennials had for the app.  However, I had a change of mind a few days later and decided that a takeover could be valuable, especially given my college’s recent history of anti-Israel activity on campus.  At minimum, my photos of Jerusalem could provide a personalized touch to a city many only learn about in history books.  At most, however, I hoped my personalized photos could be beneficial in getting Conn students more interested in the city and the gems it has to offer.  Maybe a few students would message me with questions about my travels, or even explore the possibility of traveling to Israel for a visit.

Fast forward to this past week — the designated time for my “takeover” by the Study Away Office.  I began to plan out the photos I would take and share, and the various sites I would visit in order to display an accurate representation of my time abroad.  I was excited by the opportunity, but kept well aware of the fact that I was putting my experiences out there for public eye and could potentially become target to coupled critique.  Now, none of the account’s recent takeovers from Prague, Paris, or South America had received any criticism.  But, since I am studying in Israel, and Jerusalem more specifically, I knew that I was swimming in different waters.

The first photo I shared was from a hike in the Ein Gedi trails of Israel’s Negev Desert.  The hike is popular among tourists, and commonly paired with a trip to either the Dead Sea or Masada.

The second photo was taken from on-top of the Old City of Jerusalem’s walls. I felt that sharing the geopolitical layout of Jerusalem as part of my takeover was important given that it is an integral aspect of the city and could even spark interest in those unaware of the political importance of Jerusalem’s layout. Coincidentally, I had a few students from my Hillel reach out to me and ask questions about the photo and how I was able to climb onto the walls of the city.

Sadly however, the educational and exploratory nature of the Instagram photos changed with my third photo.

Jerusalem is a large city that is vastly different in reality than the common perceptions formed about it in the media and textbooks.  Since I take great value in sharing the landscape of the city, I posted a photo of the Old City and its surrounding neighborhoods from the perspective of Hebrew University on Mount Scopus.  I snapped the photo earlier that day during my class on the “Architectural Heritage of Jerusalem”.  I explained in the caption the basic structure of the course, and how I believe it positively contributes to my unique and dynamic experience abroad.

Soon after posting the photo, I received a comment by a recent alum of Connecticut College. She exclaimed that she “had no idea that Conn did study away to ‘Palestine’ to take courses on Palestinian architecture”.  I found her blatant disregard for the legitimacy of the Jewish state to be quite laughable, and her anti-Israel rhetoric to be in-line with previous sentiments expressed on campus. Yet, I decided that the comment was of no surprise and that I should just prepare for a better photo the next day — one that would continue with my goal of showing the followers of the account insights into my daily life studying abroad.

However, I later turned on my phone to see a Facebook post by another recent alum largely critical of not only my study abroad experience, but also my right to share it via an Instagram takeover.  Just like the comment on my third photo, it came as no surprise that the author of this Facebook post did not appreciate my right to share my journey unlike those who traveled to Spain or Denmark.  This recent alum, a former leader of Conn Students in Solidarity with Palestine (CSSP), expressed in her biased and aggressive Facebook post an anti-Israel perspective that was in-line with the organization’s past anti-Israel events on campus, such as eviction notices, radical speakers and widely employed scare tactics. 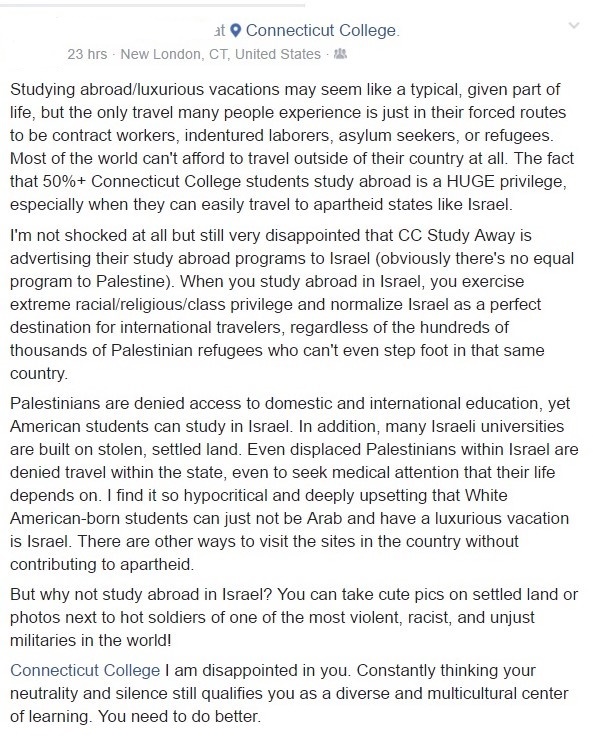 The post written by the recent Conn alum is based off the premise that by traveling to the Jewish state of Israel, I “exercise extreme racial/religious/class privilege”.  In other words, since I have the ability to, and take hold of, the opportunity to freely travel to the one country in the world where Jews feel undoubtedly safe to practice their religious beliefs after thousands of years of persecution, I am effectively in her eyes “racist”.  To an even further extent, she falsely views me studying abroad at one of the best universities in Israel to be directly correlated with me (presumably) actively supporting and contributing to the Israeli military control of the disputed territories in Judea and Samaria.  In her eyes, I might as well be wearing olive fatigues with an M16 on my back.  Anti-Israel students fail to differentiate between “White American-born students” studying abroad in Israel in order to better learn Israeli and Middle East politics, and those that are agents of the Israeli government.  They systematically ignore the political beliefs of these students, the vast majority of which are in favor of a two-state solution, and efforts they undertake to make beneficial change in the region. For them, non-Arabs traveling to Israel is the same as casting a vote Naftali Bennett.

Ever since the freshman orientation at Conn, students are taught that the institution values the free exchange of ideas and cherishes academic exploration and associated speech.  We learn that the central values of the community, as outlined in the Honor Code, are civility and respect for fellow students.  Now, the authors of the Facebook post and Instagram comment used their right to freely express their discontent with both the institution’s study abroad programs and the mere fact that I was studying abroad in Israel.

The second author said that she is “disappointed in Connecticut College” for constantly remaining silent and neutral on issues of diversity and multicultural learning.  Yet, these authors fail to recognize that Connecticut College didn’t remain ‘neutral and silent’ on this issue.  In fact, they empowered me to share my experiences in Jerusalem and even acknowledged via email how happy they were that I took them up on the offer to “takeover” the Instagram.

Connecticut College acknowledged the value of studying abroad in Jerusalem and the diverse culture and political arena that I would be exposed to on this experience. Delegitimizing my experience in Israel not only attempts to discredit my right to academic exploration, but is also in contradiction to the collective aspiration of making our institution a more “diverse and multicultural center of learning”.

Both my opportunity to study abroad in Jerusalem, and the chance I was given to “takeover” the Connecticut College Study Away Instagram showcase our school’s desire to provide students with diverse opportunities. While the statements of discontent made by the two Conn alumni attempt to attack the integrity of Connecticut College’s program and aim to de-legitimize my experience, it is clear that the intention of the program is to provide students with the very opportunity these alumni have blindly advocated against.

About the Author
Simon Luxemburg is a college student at Connecticut College studying International Relations and Economics. He has a deep interest in Counter-Terrorism & Security Studies, and plans to pursue a future in Government.
Related Topics
Related Posts
Comments