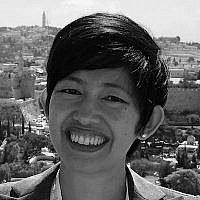 The Blogs
Serene Hudson
Apply for a Blog
Advertisement
Please note that the posts on The Blogs are contributed by third parties. The opinions, facts and any media content in them are presented solely by the authors, and neither The Times of Israel nor its partners assume any responsibility for them. Please contact us in case of abuse. In case of abuse,
Report this post.

This week, many of us watched in shocked disbelief as the Russian army mounted its full-scale invasion of the sovereign state of Ukraine. The aggressive actions and rhetoric of Russian President Vladimir Putin may be the tip of an iceberg in a very complex situation, and as the world waits to see what may happen, many voices are weighing in. Leaders of nations are condemning Russia and supporting Ukraine’s sovereignty; sanctions are being applied; citizens around the world join protest rallies; religious leaders pray for peace and justice; humanitarian aid organizations prepare for mass displacement of Ukrainians and other nationals fleeing into neighboring countries. On more personal levels, concerns for friends and family members press upon us because this war impacts real people.

As dangerous as this war remains to everyone in the region, there is an additional concern that we must draw attention to: the vulnerability of the Jewish communities of Ukraine in this war.

The lessons of the past should inform our perspective on unfolding events. At the time of writing, there are no reports of anti-Jewish attacks; the people of Ukraine are suffering as one. It is also important to applaud Ukraine’s September 2021 legislation that bans antisemitism. But awareness of Jewish history in the region as well as public statements by Putin’s administration should make us alert us to potential threats.

In the case of Ukrainian Jewry, the history of persecution especially in times of national and social upheaval is grave. Hatred of Jews having deep roots in the region, outbreaks of antisemitic violence from all sides of conflict has been a common tragedy of countless Jewish communities in the Pale of Settlement. It is a long and difficult history. One of the most extreme examples has been documented by Jeffrey Veidlinger in Tablet Magazine. At the onset of the Bolshevik Revolution and Russia’s advance on Ukrainian lands, Ukraine’s Jews suffered the destruction of whole communities, who were “singled out for persecution by virtually everyone.”

This concern has already been expressed by Ukrainian Jewish leadership. One rabbi from Dnipro posted two days before the invasion, sharing that “he is more worried about the possibility of antisemitic provocations carried out by Russian agents than a full-scale war.”

The particularly confusing element of this situation is that Putin has stated that fighting Nazism is a chief motivation for the military action. On the surface, that statement sounds as though his administration is coming to the rescue of not only the people of Ukraine but to the Jewish community in particular. However, his definition of Nazism is radically different than how the rest of the world understands it, and it is this take on the history of Nazi bigotry and the Holocaust that should raise concern.

For example, Putin recasts Ukraine’s Jewish president, Volodymyr Zelensky, as a Nazi collaborator, and thus, implies he is not truly Jewish or a potential target of antisemitism. He is rather, as Jason Stanley’s in-depth analysis of the situation explains, the very symbol of anti-Russian Nazism that required military force. To understand how Putin and his administration came to this perspective, consider the view of history articulated by Putin’s recent publications, speeches, and stated pretext for war. In this narrative, Russians are the primary victims of Nazi oppression, and so Nazism becomes, at its heart, a marker for anyone who threatens Russian national identify.

At the same time that Jews are no longer the primary victim of the Nazism, as Stanley explains, the Russian version of Christian nationalism Putin’s administration draws upon has historically cast Jewish people as “the agents of moral decay…bring(ing) a country under the domination of (Jewish) global elite.” This is a standard antisemitic trope, with deep historical roots in such conspiracies as the Protocols of the Elders of Zion.

Anyone who stands in opposition to the Putin administration’s narrative becomes recast as an oppressor of the Russian people and a threat to Russian sovereignty. That Zelensky is Jewish and much of his family perished in the Holocaust does not prevent his demonization on these grounds. In fact, from the Kremlin’s perspective, his resistance to Russian hegemony makes him a traitor to all those who suffered from Nazism, which has led to their public comparison between him and Jews forced to run the gas chambers at concentration camps.

Putin’s rhetoric creates a complicated situation, both for the Jewish community in Ukraine and those abroad. On one hand, Putin’s language has the potential to create a kind of imagined solidarity with Jewish people. On the other hand, Zelensky’s example strongly suggests that such imagined solidarity extends only to Jewish people who uphold, or at least do not interfere with, a very specific view of Russian history and regional hegemony.

So far, thankfully, the general violence in Ukraine has not translated into more specific violence targeted toward Jewish Ukrainians beyond those in government. However, as Zelensky’s example shows, Putin’s rhetoric is more than eager to label any Jewish people who don’t support his nationalist narrative as an oppressive threat to Russia and the world order. Tapping into this fear of the Jews as a “corrupt stateless race who seek global domination,” Putin makes it easy to eventually turn Jews into the enemy, as any collaboration with the Ukrainian government makes them, in his view, the ultimate traitors: both to Russia and to Jews everywhere.

So, while the world watches and prays for peace in Ukraine, we should also watch and pray for the safety of the Jewish community in the region.

Serene and David Hudson are Christian educators who live in Dallas, Texas

About the Author
Serene Hudson is Vice President of Education and Advocacy at Passages Israel. She is a Christian advocate for Israel, leads efforts to combat antisemitism and works to build strong Jewish-Christian allyship.
Comments