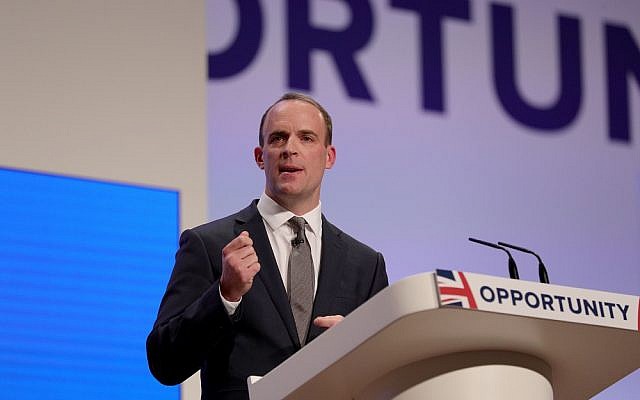 There is a strange feeling abroad, of being almost, but not quite, at the edge of a cliff. And it applies in America, Israel, and — of course — Britain.

Sample number one, America. The last weekend of May was the annual convention of California Democrats in San Francisco. What you might have expected to be debated in front of such big Democratic beasts as Elizabeth Warren and Bemie Sanders — both vying for the Democratic nomination to run against Trump next year — were economic and social issues.

What I —perhaps naively — did not expect was a group of resolutions about Israel and Palestine, tabled by hard-left delegates, one of whom, inevitably, David Mandel, is Jewish. Well, OK, I did expect resolutions about Israel, given Trump’s much-hyped magic Middle East plan, to be unveiled any hour now. What really appalled me was the casual wording of one of these resolutions, which linked the shootings of 11 innocent Jews in Pittsburgh last year to Israel’s “wilful” association with white supremacists in the US. Tweak that resolution just a smidgen and look what you get: the repellent Pete Willsman, blaming Israel for antisemitism in the Labour Party.

As it happens, the California resolutions did not get debated and were withdrawn by their sponsors. But the fact that they were even considered for debate should concern people about what I will call The New Normal.

Sample number two: Israel. A wildly angry Benjamin Netanyahu, hardly able to believe that he was not going to be able to form a coalition after his wafer-thin victory in the 9 April elections, has virtually frothed at the mouth and used his trademark description of “weak leftist” to disparage none other than Avigdor Lieberman.

Lieberman, Bibi’s former ally, is the absolute antithesis of a left-winger and never met one he couldn’t even be bothered to spit on, but the truth is that the combination of an embattled prime minister, facing corruption charges, and the lightning rod issue of exemption from military service for the strictly Orthodox, has lit a fire under Israeli politics. Two elections in a year is not normal, even for Israel.

Sample number three: Britain. The story so far — we have no prime minister — well, we do, but in name only. There are so many people running to be Theresa May’s successor that it is almost simpler to say who is not running.

But the message of one of the candidates last week struck me as both weird and self-serving, nothing to do with who should lead Britain, and everything to do with making political capital.

Dominic Raab has devoted an entire campaign video to using the story of his Czech Jewish refugee father, Peter, to attack the Labour Party over antisemitism.

I believe all parties must preserve the free and tolerant democracy that I know from my own family's experience we are lucky to have in this country.

If you look at the evidence, Jeremy Corbyn and John McDonnell have shown they won't stand up for that ideal. pic.twitter.com/4DTUG2TF2v

I watched this video twice but still can’t figure out why anyone backing Raab for prime minister should buy this approach.

Does slagging off Corbyn specifically over antisemitism — though, God knows, he is a legitimate target — make Raab a better candidate than Michael Gove or (shudder) Boris Johnson? This race is meant to be about Brexit, not antisemitism. Why invoke his long-dead father (Peter Raab died in 1986) to polish his credentials?

Then I remembered that Raab, while still Brexit secretary, came under fire for saying he “hadn’t quite understood” how reliant UK goods trade is on the Dover-Calais crossing. In other words, Raab was reaching for whatever worked, to improve his bid.

I have news for him: this is not normal, and it didn’t.