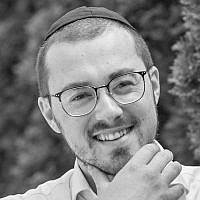 Another year, another Three Weeks. Still in exile. Still crawling back to the Holy Land. Still trying to rebuild the Beis HaMikdash in Yerushalayim, G-d’s house on earth, the Holy Temple between husbands and wives, between parents and children. Still working to piece together the shattered tablets of our broken hearts, our broken spirit.

If the Churban were only the destruction of a building, perhaps we could deal with it. But the truth is that it is so much infinitely more. The Beis HaMikdash was a microcosm of the entire world; thus, the Beis HaMikdash’s destruction is the destruction of the entire world. There can be no true beauty, no true joy, no true life without that holy building. “Eich nashir es shir Hashem al admas neichar”[1]; the song of all creation has ceased. And in the deadly silence of two thousand years, one need not look too far to discover what enormous pain has filled that void. The Inquisition, the pogroms, the Six Million. More recently, in our generation of comfort and luxury, the annihilation of our spirit. What a contrast to what once was! What a contrast to what will soon again be!

The only way to make it through is by strengthening our absolute faith that the Master of the world has not forgotten about us and that we are still connected to Him in the deepest way. But this is not an easy task. Though we may never verbalize it, deep down, perhaps even on a subconscious level, we look at all the pain G-d’s “Chosen People” have suffered over these past two thousand years and begin to doubt that we still maintain our previous status. How can it be that Hashem is our loving Father Who wants only the best for us when all empirical evidence points to the clear conclusion that He has forsaken His People? How can any sane person, given the miserable history of this downtrodden nation, say that we are still the children of Hashem whom He loves?

Listen to what the holy Berditchover says. There was once a wealthy man who had a very close relationship with a certain pauper to whom he would give generous donations. One day these friends got into a tremendous argument and the wealthy man threw the pauper out of his house. Whenever he saw the pauper on the street he would walk right past him like he wasn’t even there. Then, after a few weeks of broken contact, the wealthy man sent a letter to this pauper. In the letter, he wrote: “To my dearest friend, I would like you to know that my heart is still drawn toward you. My love and friendship for you still strongly burns.” When the pauper received that letter, he knew that one day, however long it might take, his relationship with the wealthy man would be rebuilt.

Says R’ Levi Yitzchak, it is the same way with our Father in heaven. We have been exiled, thrown out of Hashem’s House, and kicked out of His precious Land. But though it has been so long and all external signs declare that we’ve been cut off from Hashem’s love, we know we are still connected. Do you know how we know? Because we have never stopped receiving His love letters. Deep within the darkness of this long exile the Jewish soul still cries out, spurred on by the daily call from Heaven that never ceased, whispering, “Return, My wayward children.” In this generation we are witnessing a tremendous surge of devotion, both from ba’alei teshuvah, returnees to Jewish tradition, and from within our own camps. Mirroring the unparalleled decadence and immorality of our times, an incredible fire of youth is rapidly spreading across the entire spectrum of Torah Jewry. Sick of the sweet but unmistakably false taste of society’s treats, Jews all over the world are yearning for real purpose, true meaning, and serious direction in their daily lives. And though it requires tremendous sacrifice and personal fortitude, so many of our fellow Jews, (particularly today’s youth who are dealing with an unsurpassed onslaught of temptation) are following the voice of the soul which is begging for depth, for connection to its Source. They are gathering their strength and heroically passing the most difficult tests with superhuman strength that is flowing down upon them from the Master of the world. “Uv’chol zos Shimcha lo shachachnu,”we have still never forgotten. These are the love letters showing up in the mailbox of the Jewish people. Though Hashem may still pass on the street and not wave to us, seeming to have abandoned and cast us away, these holy messages tell us what He really feels. Because against all odds, deep under the darkness and gloom which surrounds us, the Jewish soul is still shining.

The following are the beautiful words of an influential teacher of Torah, a great lover of Jews:

How do I connect to the depths of my life? Is it through what I see or what I hear? Seeing is very high, but hearing is much deeper.[2] It doesn’t take a deep person to see but it takes a very, very deep person to hear. So the Ishbitzer says like this. Seeing with your eyes is very limited. You can only see the outside. You cannot see the inside. When you listen, you get to the inside. Listening is the inside. With your eyes you see destruction. You see the Inquisition. You see Auschwitz. On the level of hearing, the greatest thing in the world is when you mamesh hear what the Ribbono Shel Olam is doing with us. If you have good ears, then you hear how G-d chooses us to be His People. On the level of seeing, you see how He threw us out and how so many people still hate us and fight us. On the level of hearing, I hear that He is taking us back.[3]

Can you hear it? Can you look around and observe the destruction of our nation, the destruction of the world, and yet still hear the sweet love letters from our Father in heaven telling us how much He loves us, how much He is present in our lives, how much He has never left all the broken Temples that fill the world? If you can, then you know it is almost over. If you are still hearing these messages echoing within, guiding you to the Source of life and giving you the strength to emerge triumphant in the battle of life with all the odds stacked against you, then you know we are at the very end of it all. We are standing at the doorstep, about to walk in to Hashem’s House once more. You can already hear the shofar of Mashiach, the harps of the Levi’im. You can already smell the ketores, spreading throughout the world and waking up all those who have fallen asleep in the dead of this two thousand year-long Night. Let it be soon! Let it be today!

This essay is an excerpt from “Sparks from Berditchov: An Inspirational Guide to Avodas Hashem” recently published by Feldheim. Yaakov’s next book, “Sunlight of Redemption”, will be in stores this coming January. His essays on a broad range of Torah thought have been featured in print and on the web. Originally from Far Rockaway, New York, Yaakov currently lives in Chicago with his wife Shira, where he teaches for the Illinois Center for Jewish Studies and writes for the Chicago Jewish Home. He can be reached at sparksfromberditchov@gmail.com or on Facebook for questions and comments.