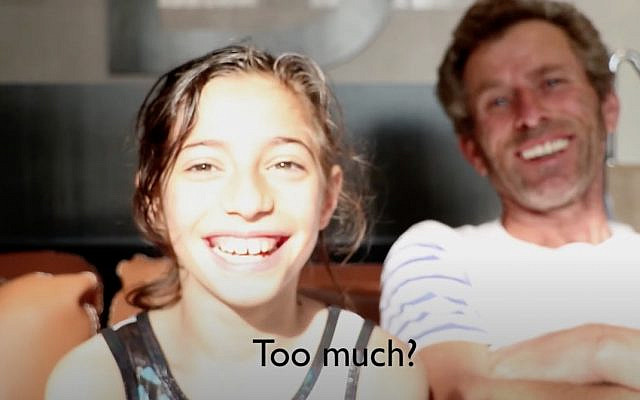 There is a child, a wisp of a girl just turned 10, who has lifted my sails during these dark times.  Her name is Nurjan, and she lives in the city of Petah Tikva, Israel.

Nurjan dreams of making it to the Olympics and winning a medal in gymnastics. All you need to do is meet her to believe. Her backflips are smooth, she can walk the walk, on her hands, with stamina and grace, and her self-confidence is as clear to see as her radiant Julia-Roberts smile.

Beyond that, Nurjan is blessed with a loving family.  Her father Abbas is a construction worker, and her mother Izabella is a security guard. He is a non-Jew from Turkey; she is an Israeli of Russian heritage.  Nurjan speaks both of their languages.

The Olympic hopeful began life in Israel, moved with her family to Turkey when she was five and recently returned to Israel where her parents believe that she and her siblings, also gymnasts, have a better chance of succeeding. But my aim is not to recount the saga of a future Olympian.

Rather, I am sharing Nurjan’s story, because I believe she embodies the spunky quality that has helped catapult Israel to stand proudly among the first-world countries of the world. She and her family also represent an admirable way for people to look ahead as we emerge from our lockdowns and restart our daily routines.

I met Nurjan through her mother, a security guard at the Tel Aviv building where I live. Reserved and soft-spoken, in our initial encounters Izabella did not strike me as the lioness she is at heart.  As we got to know each other, however, I discovered how driven she is to help her daughter excel at the highest level in a dangerous sport.

When she showed me videos and stills she had taken of Nurjan as she trained at home during the pandemic, I was impressed. The girl was obviously a talented athlete. That said, I come from the country that gave the world Simon Biles, Gabby Douglas, Aly Raisman, and Mary Lou Retton. What’s more, I don’t have a trained gymnast’s eye, so I couldn’t say just how good and promising Nurjan actually was for her age.

What drew me in was the fervor of her mother’s faith. To see the makeshift balance beam Nurjan’s father created in their home, to watch Nurjan working on her strength and balance work with her little sister happily bouncing in the background, or sitting contentedly in her plastic car, while Nurjan did a handstand on top of it, made me all verklempt.

Hearing Izabella generously praise the other athletes at the gym where her daughter had been unable to train for months, and ask me to include the name of the gymnastic center in the credits of a short video I might make of Nurjan, not only impressed me. It also brought to mind the rich parents who tried to game the American college admissions system by lying about their children’s sports prowess.

Nurjan’s working-class parents love their daughter just as much as American actress Lori Loughlin and her fashion designer husband Mossimo Giannulli love theirs. But unlike them, and other privileged Americans, Izabella told me the truth about her daughter who offered concrete proof by performing with elan on a brick plaza outside the building where her mother works.  If she fell wrong while doing a backflip, she would have smacked into unforgiving stone.

So, call me a shameless booster, if you like; I’ll plead guilty.  After recording the passion, grit, resilience, humility, and love that I saw through my camera lens, during the world-wide threat of Covid-19, and the civil unrest roiling the land where I was born, how could I not be moved by a child who lives in a city called “Threshold of Hope” ?

Of course, you don’t have to buy a word I’ve said.  Watch the video Nurjan’s family and I filmed together.  Decide for yourself.