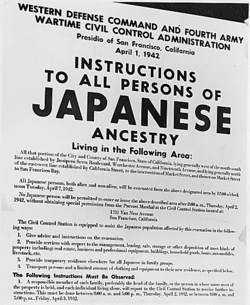 On this day back in 1942, our grandparents let our government do a terrible thing.

They were scared, I guess.

But they let it happen and they turned away when their neighbors disappeared.

No one really talks about it – not enough, at least.

But we should – especially now as Donald Trump gains support while making speeches too reminiscent of those terrible times when we turned on our own like a pack of Jackals.

These people were born here with the papers to prove it. Only their last names and maybe the way their fingers held a pair of chopsticks were different from the Joneses or the Smiths or the Millers down the street.

But they were no less patriotic – they raised their kids to stand before our flag and pledge allegiance.

They sent their sons to fight for us overseas, and oh how they fought in highly decorated units.

And they died, too, in that war just like the Jones’ son and the Smith’s boy and the Miller’s kid.

And when it was over there was no outcry from our grandparents. No wail of shame.

And they should be ashamed.

WE should be ashamed.

Things just went back and people tried to move on.

I don’t think we talk about this nearly enough – and we should.

Or else our grandchildren will have to live with the consequences.