I was fortunate, actually blessed, to have studied Tanach (Bible) with some of The Greats (distinguished, pre-eminent, really).  I was awed by their ability to jump from Hosea to Chronicles, then Ruth and Numbers to elucidate some historical or etymological point.  This morning, to an infinitely lesser and more humble degree, I found myself doing the same, from Genesis to Jeremiah and finally back to Exodus. 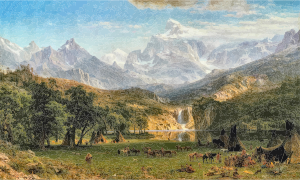 First, to understand today’s subject, we need to have a mental picture in our minds of the settings being described.  And second, we have to clearly understand that the word midbar means “wilderness”, not “desert”.  (Americans, think Daniel Boone in Kentucky.)

Now, we want to examine Mother Rachel in the Book of Jeremiah in Chapter 31:14-16 (and then Hagar in Genesis 21):  Thus said God: A cry is heard in Ramah — Wailing, bitter weeping — Rachel weeping for her children. She refuses to be comforted for her children, who are gone.  Thus said God: Restrain your voice from weeping, your eyes from shedding tears; for there is a reward for your labor — declares God:  They shall return from the enemy’s land.  And there is hope for your future — declares God: Your children shall return to their country.

Distraught over her children in Exile, Rachel waits, continually weeping, by the wayside for them to return to the Land of Israel.  God’s words of comfort and reassurance of their return is apparently enough to turn her despair to hope.

In Genesis 21, Abraham leaves to the midbar with Yishmael, bread, and water.  The boy, moaning, appears to be dying of thirst while Hagar, at a distance, bursts into tears.  God hears Yishmael, comforts Hagar, and says: Come, lift up the boy and hold him by the hand, for I will make a great nation of him. And GOD OPENED HER EYES (my caps) and she saw a well of water.

Tentatively, we would have thought she would be looking intensively and intensely for water – like when we misplace our car keys or our eyeglasses…even more so because of the desperate situation of her son.  But there is no mention of that.  Also, and this is what grabbed my imagination, why does God have to open her eyes when God’s comforting words were enough for Mother Rachel to stop the flow of tears.

And then (and I am certainly not the first one to point this out), she sees the well of water – a well that had been there all the time!  Why didn’t Hagar see the well?  Physically, I imagine it is because her tears impaired her vision.  I think, though, what is going on here is a combination of things.  Hagar was not only weeping to see her son in such a life-threatening state, but also for herself now having lost her master-husband and comfortable life with Avraham.  And that’s why the additional effort, i.e., opening her eyes, by God was needed.  For Mother Rachel, her tears were purely-and-simply about the distress of others.

As for Moshe at the burning bush in Exodus Chapter 3, there are several issues.  What is not an issue is that a midbar is not a desert, since there is an abundance of grazing land for Yitro’s sheep that he is tending.

However, the setting is at Horev which is Sinai where the cosmic sound-and-light revelation eventually took place.  Midrashim all over Rabbinic literature and in pulpit sermons tell us the ostensible point: God is in a humble place and it is not crucial to have lightning, shofar blasts, clouds, and fire to sense The Presence.  (I once saw a sign outside a synagogue sanctuary that read, “Please turn off your cellphones.  If God wanted to talk to you, God would use the traditional thunder and lightning.”)

Mountain vs. bush is not what concerns me.  My question is the word “vehinay” in the verse (Ex. 3:2)  “he saw and hinay there was a bush burning but not being consumed.”  Hinay is a wonderful word, worth tracking down everywhere in the Bible.  It’s best meaning is a surprised reaction to something.  My very favorite is Genesis 29:25: Jacob wakes up in the morning after having thought he has slept with his beloved Rachel, “Vehinay hee Leah” – and “Whoops?”  “Holy mackerel?”  “What in the pluperfect heck is going on here?”

Here’s the problem – was he the only shepherd out there?  Remember that there were several shepherds around the well when Moshe met Yitro’s daughters.  Might not some of them grazed their sheep in the same general area of Moshe’s?  Hadn’t they seen this marvelous sight before, too?  Furthermore, isn’t it possible that the burning bush was there for a long time, and Moshe walked right by it many times, and only now he turned aside to see what it was all about?   It may be that he had not transitioned well into the rhythms of shepherding from his life in the palace where he was waited on hand and foot or in his wanderings around the city with its crowds and hustle and bustle.

The life of the shepherd is wearying.  I one saw a demonstration in New Zealand of sheep dogs doing their job, but they have a better sense of sight, hearing, and smell, and considerably more stamina than we do.  Moshe might have been so pre-occupied with tending the sheep, he just didn’t notice it the many times he saw it before.  Nowadays, it is fashionable to attribute things like bipolar disorder or attention deficit disorder to many great artists and scientists.  So the psychiatrists who go too far on this theory, might say he had ADD, and though he was sometimes standing right in front of it, he was thinking about dinner or Tzipporah or how could he get this hard work done if he were fasting on Shiva Asar BeTammuz and Ta’anit Esther?  We are grateful, of course, that this once, the hinay kicked in and he stopped, looked and listened.  The rest, as has been said, is historia.

If you would want to make a sermon of all of the above, it’s nothing new: so much of the wonders of Life and our own lives, so much direction for ourselves is right there in front of us, waiting for us just to see it.