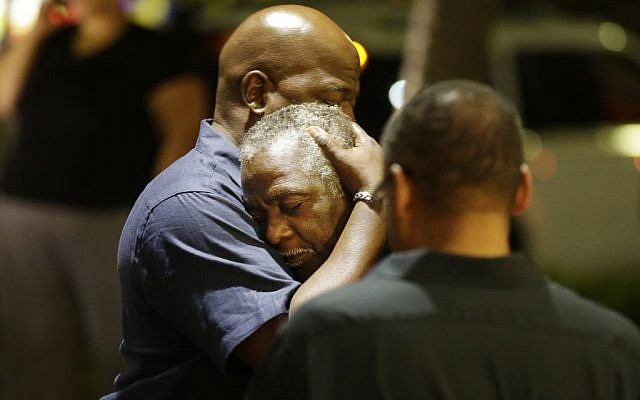 Worshippers embrace following a group prayer across the street from the scene of a shooting on June 17, 2015, in Charleston, South Carolina. (David Goldman/AP)

I was just listening to a commentary by John Stewart on the horrendous massacre of nine churchgoers in Charleston in the United States. I have no doubts that Mr. Stewart was totally sincere in his expression of pain and sadness about the event. Personally, I generally do not follow his program as I find it to be a little too simplistic in the way it pokes fun at people who are often actually trying to make a difference. But in this case, I think it is truly insufficient and even inappropriate to express remorse over this tragedy, without presenting some type of plan for dealing with it.

At one point, Mr. Stewart noted that the United States has invaded two countries and is continuing to spend tremendous amounts of money in order to eliminate potential Islamic fundamentalist threats. He seemed to feel that when the threat is from abroad, it is considered intolerable. Contrarily, when such butchery occurs “at home”, people simply tend to shrug and move on. He asked the legitimate question, why.

I have discussed the issues of privacy in our present technological world, a number of times.  I have expressed my personal view that I am willing to publish almost every element of my private affairs, if it garners greater personal security. For example, I am willing for the local security services to use computerized scanning  technologies to evaluate my Facebook posts, in order to rule me out as a potential threat to the public. If the same technologies are applied to every Facebook user, there is a far greater chance that human threats would be identified before they act. Ultimately, it truly is a very simple equation. The more you sacrifice privacy, the more safety you can hope for.

The following paraphrased quote is attributed to Benjamin Franklin, specifically “Those Who Sacrifice Liberty For Security Deserve Neither”. I personally take issue with this statement, firstly for its use of the term “deserve”. I consider this term incredibly judgmental and as such inappropriate. I would imagine this statement being far more powerful were it to say that those who sacrifice liberty can expect a loss of security. In such a way, Benjamin Franklin would have been educating and warning the public, rather than preaching to them.

More so, I personally think that this statement is wrong, at the very least in today’s reality. I have no doubt that my emails are regularly scanned by various security services. Nevertheless, I enjoy freedoms that Benjamin Franklin and his compatriots fought for. Within the reality of his time, I can understand that the choice was between tyranny and freedom, with no middle ground. In today’s world, non-thinking computer software can scan a social media update and flag it for human review or ignore it, and at no time lead to a “safe” person’s privacy to be broached. I can’t blame Benjamin Franklin for not considering the power of a technology that would not exist for another 200 years. But today, policymakers have to take this fact into account.

When all is said and done, it is definitely possible that this massacre in Charleston could have been avoided, if the NSA and FBI were given free hand to scan emails and social media in order to identify such a threat. I wholly agree with Mr. Stewart that, after the fact, there is truly no benefit to throwing up our hands and expressing disdain. If people are not ready to make hard decisions, they will likely continue to suffer from their indecisiveness.

I fully appreciate that there are those who consider no price too high to pay for maintaining our privacy. In this event, though, history teaches us that we will continue to suffer at the hands of psychotics and madmen who have no qualms about killing innocent people who were doing nothing more than praying for peace in their house of worship. Please appreciate that I have no moral message hidden in my words. I am not saying that those who are not willing to sacrifice their privacy “deserve” to suffer. No one deserves to be shot down in this way for expressing their right to worship or share an opinion that might not be popular. But I do expect people to be cognizant of that fact that evil is perpetuated in an environment where “good people” fail to take certain, sometimes extremely difficult, steps.

I remember watching a TV program that asked the question, what is the difference between two rivals who both use the same methods of war in order to achieve victory. If it turns out that both sides are killing innocents and torturing potential informants, does either side “deserve” to win? One answer that was expressed was that the methods of war are judged by the outcomes that the rival is striving for. Effectively, this answer is stating that the ends justify the means. As such, if one is fighting for the liberty and freedom of people, then all bets are off. I would not dare enter into the impossible argument of who decides what version of liberty and freedom is valid. I am simply saying that this is not the first time that people have asked the question: what is justifiable in a war against those who commit atrocities.

My prayers are with the people of Charleston and with all of the people in the United States who suffer for no other reason than being who they are and expressing their thoughts. I personally take selfish solace in the fact that I live in a country that seems to have managed to find a reasonable balance between privacy and safety. I know that there are those who disagree with me on this specific point. I am simply expressing my perception.

I personally think that the day will come when being a member of society will require a very loose type of privacy on the part of all of the society’s constituants. I think, actually, that people will slowly accept this loss of privacy, not for safety issues, but in order to get better deals on tech toys and clothes. In the future, I believe that many people will almost subconsciously sacrifice their privacy for the purported benefits of being totally transparent. I hope at least in this future reality, that people will also benefit from increased personal security.