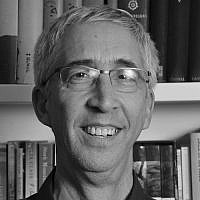 The Blogs
Yaacov Lozowick
Apply for a Blog
Advertisement
Please note that the posts on The Blogs are contributed by third parties. The opinions, facts and any media content in them are presented solely by the authors, and neither The Times of Israel nor its partners assume any responsibility for them. Please contact us in case of abuse. In case of abuse,
Report this post.

Israel is in a series of major parallel crises. We’re in the coronavirus crisis along with all of humanity; only time will tell if our leadership, preparedness, and society’s behavior served us well or not. We’re a year into an unprecedented political crisis. Someday it will pass, and we’ll need to learn from our mistakes. Yet the most serious crisis is the erosion of Israel’s democracy by insisting some votes are worth less than others. An insistence that has been Prime Minister Netanyahu’s position for five years, and is rising in its stridency.

Depending on whether you count the Palestinians of East Jerusalem as Israelis, 17-21% of Israel’s citizens are Arabs. As most in East Jerusalem can’t vote on the national level, let’s say 18%. As any third-grader ought to know, in a democracy one citizen has one vote. This is so simple, so basic and so fundamental that it ought to be the end of the discussion. Period.

Sadly, roughly half of Israel’s voters beg to differ. Some are parroting the slogans of Netanyahu’s propaganda, which is interesting because in reality his governments have been pumping large budgets into effective programs to promote the well-being and integration of Israel’s Arab minority. Others are more thoughtful. Their argument is that when it comes to real sharing of power, Israel needs to be more Jewish than democratic.

This is a pernicious idea and I’m proud to be of the Jewish and Zionist political camp that rejects it totally. Yet rejecting isn’t enough. The idea needs to be answered. Such a response must begin from giving the idea momentary credence. While many Arab citizens of Israel regard themselves as both Palestinian and Israeli, and compare this double identity to the Jews of the diaspora who are both Zionist and patriots in their own countries, some of Israel’s Arab citizens wish it harm. Sheikh Raed Salah, for example, the leader of the Northern Branch of the Islamic Movement in Israel, who has been convicted for some of his activities. Or Dr. Azmi Bishara, founder of the secular nationalist Balad party, who as an elected member of Knesset probably spied for Hezbollah during its war with Israel in 2006. We’ll never know for certain since he fled the country before the police came for him. Hanin Zoabi, another Balad MK, participated in the anti-Israeli Mavi Marmara flotilla to Gaza in 2010.

The idea that some Israeli Arabs and even their elected representatives may not be keen on Israel’s best interests is not ridiculous. It’s proven fact.

But that’s only a small part of the picture. Zionism from its beginning never expected to live in a Jewish-only country. From Herzl onwards, the assumption was that although the Jews needed a Jewish majority to have a Jewish state, the Arab minority would feel good enough about the country to pledge their allegiance and live there in peace. This was made official and explicit in the Declaration of Independence, which promised complete equality to all citizens irrespective of religion or any other consideration. To the best of my knowledge, no political figure or party ever said otherwise, perhaps with the exception of Meir Kahana’s tiny party in the 1980s.

The reality has not been as rosy as the declarations; sometimes it has been quite distant from them. Yet Jewish Israelis assumed they could balance the Jewish and Democratic parts of their identity through the combination of retaining a large Jewish majority, and enabling the minority to find its rightful and comfortable place. In the 1990s there was a gigantic wave of mostly-Jewish immigration; in the early 2000s the non-Jewish birthrate sunk even as the Jewish one rose. The Jewish majority of roughly 80% has been stable for a full generation. The same generation has also seen ever broadening and deepening integration between Israel’s majority and its minority – in the economy, culture, the public sphere and even in unlikely places: there are Joint-List-voting Arab Israelis with high security clearance in sensitive jobs. No-where is this integration more obvious than in the medical field. As Jews and non-Jews alike face the covid-19 epidemic, the medical teams treating them are seamlessly Israeli, irrespective of their ethnic identity.

Public opinion polls of Israel’s Arabs have been decisive for years: A majority of them identify as Israelis. Their aspiration for how they’d like their country and society to be may be different, but it’s not as if the Jewish majority agree on one generally accepted goal.

The behavior of the Arab voters and their representatives in this annus horribilis has been well within the limits of what previous generations of Zionists and Israelis hoped to achieve. They wish to participate in the political sphere and be part of a governing coalition, even if not yet part of the government itself. We are closer than ever to reaching the goal we set ourselves in the declaration of Independence. The fact there’s now a large Arab party which seeks to participate and take upon itself responsibility, should be a moment of satisfaction and celebration. Our prime minister, his acolytes and allies, who have chosen this moment to repudiate the aspirations of more than a century of Zionism, to reject the most basic part of democracy, and to spurn the majority of Arab Israelis who wish to take their rightful place in our common nation – they are the ones who are undermining our country. Not some loudmouth extremists who lack any real power to cause much damage.

It’s that serious. Those are the stakes.