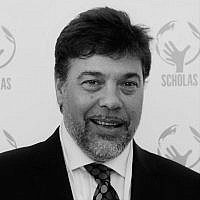 The Blogs
Dario Werthein
Apply for a Blog
Please note that the posts on The Blogs are contributed by third parties. The opinions, facts and any media content in them are presented solely by the authors, and neither The Times of Israel nor its partners assume any responsibility for them. Please contact us in case of abuse. In case of abuse,
Report this post.

As a child I dreamed of being a fireman. Honestly, I remember this till this very day.

As the son of a banking tycoon and a ‘Yiddish mama” my parents were not in love with the idea, but were wise enough to let me choose my path. And yes, I did not end up a fireman, but along the way I knew one thing — that I have the tools to become whatever I choose.

This opportunity is not trivial for most of the world’s children. You don’t need to be a refugee in the shores of Europe of a sick orphan in the Savannah to know that the path from social periphery to financial independence is a tough road anywhere in the world. World Ort taken upon itself to repave that road, and for nearly 140 years it has been educating children and granting them the technological instruments needed to find their professional path and create social mobility.

Technological advancement made me optimistic. Like everyone else, I stood breathless as I saw an email crossing the oceans within a split of a second, leaping above boundaries, glaciers and continents. We all suddenly felt part of one global village. Part of a better world, where everyone is equal, accessible and engaged in dialogue.

But this was only an illusion. What good are the wonders of technology when faced with infinite alienation? How will a satellite in space be of help if a simple email is blocked by fierce walls of hatred? The advancement which gave me so much hope, cannot overcome a world filled with hatred and suffering.

Back to my childhood. In my Jewish elementary school in Buenos Aires we sang in Broken Hebrew “the world is a narrow bridge and one should not be fearful”. And it is entirely possible that the answer lies right within these simple words. We need to build bridges to overcome gaps and inequality. Last week I lay the cornerstone for an inter-religion bridge, when we signed an agreement for collaboration between World Ort and the Scholas Ocurrentes, the education organization of the Vatican. Two such different organizations, who share a common social goal to make the world a better place. The signing ceremony was held in the presence of Pope Francis. A man who works tirelessly to help and elevate those in need and in pain. As a proud Jew I gave him a special gift from Jerusalem. The moving ceremony symbolized in my eyes that a bridge of dialogue and peace is within our reach.

A year from today, in my birthplace Buenos Aires, we will lay another cornerstone for a bridge of global dialogue, when 200 youngsters from Argentina, who represent all of the cultural and demographic provinces of society, will gather. Alongside them, will be 300 youngsters from World Ort throughout the globe in a first of its kind inter-cultural conference for dialogue and international communication. A few days later, hundreds of young ambassadors will come out of this conference, armed with tools of respect and patience to benefit the society from which they come. The official name of the conference has not been decided upon yet, but I have already named it “The Conference for a Better World”.

Last July, together with Scholas and the Hebrew University in Jerusalem a conference was held in which World ORT students from throughout the world took part. Youth from Israel, a group from Scholas and a group of Palestinian youth spent 3 days together, immersed in art, music and conversation and learned new ways to speak and connect. This is the example in light of which we would like to continue if we truly wish to change and heal the world.

The State of Israel must live in peace with its neighbors and the world must open up for dialogue and opportunities. From my modest place in this world, I work every day to achieve this.

When we were children we dreamed of being pilots, astronauts, firemen, doctors and lawyers. The options which we entertained as children are only a drop in the bucket when you look at the unlimited options that today’s modern technological world offers. In effect, most of the professions are still in their very early stages. Together they grow to a new, wonderful world, full of opportunities. We at World ORT would like children, all children, without differentiation of religion, sex, status or race. No matter what their starting point is, they will be able to pursue their dream.

About the Author
Dario Werthein is the president of the board of World ORT.
Comments
Advertisement