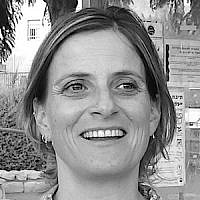 The Blogs
Aliza Raz-Melzer
Apply for a Blog
Please note that the posts on The Blogs are contributed by third parties. The opinions, facts and any media content in them are presented solely by the authors, and neither The Times of Israel nor its partners assume any responsibility for them. Please contact us in case of abuse. In case of abuse,
Report this post. 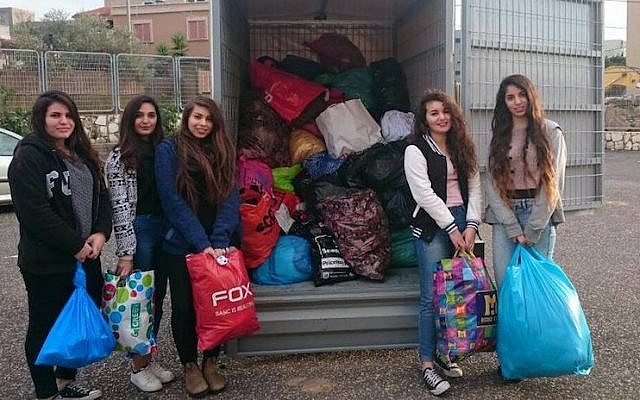 I was watching TV, the nightly news. As usual it was almost all men on the screen. As usual they were forecasting the chances of war and its duration. Only this time it was a war that doesn’t include us Israelis. It includes the people who live next door, the citizens of the Syrian Arab Republic.

As the analysts informed us that the war between the two warring parties – both, to varying degrees, enemies of the State of Israel – would go on for the foreseeable future, the camera panned across the desolation of a city ravaged by war. Outside, for us and them, sharing a small geographic space, it was winter, and a feeling began to settle within me that we had to do something.

It didn’t need to be something big. It just needed to be an action, a concrete expression of our empathy. Something for those who are always the primary victims of war: the women and the children. For me this was just a feeling, a nagging but largely dormant sensation, but for Ruti Doron, an educator from the settlement of Tekoa, it was a blaring call to action. Unbeknownst to me, she had seen the photos of three-year-old Alan Kurdi, the refugee child sprawled out dead in the Mediterranean surf, and taped it up above her bed. For her, inaction was no longer an option.

She contacted my longtime best-friend-forever Bat-Ami Sorek, who brought me in. We were joined by Ortal Mussachi, Ruti’s 30-year-old niece, by Lilach Cohen, then on maternity leave after giving birth to her fourth child, and Gilit Koifman Jablonovich, who had conducted her own personal initiative to assist Syrians in Israeli hospitals. Together we set out on our mission.

Ruti called everyone she knew until she found a way to hook up to the clandestine pipeline to send relief supplies into Syria, making sure they reach their destination.

The next step was to launch our grassroots-as-they-come, 100% volunteer organization, which we named “We Cannot Stand Silent.” Through social media and word of mouth, we set out to collect essential supplies for women and children in the Syrian refugee camps just over the border. The outpouring of empathy and assistance has been incredible: In just nine months, we have organized five packed-to-the-gills shipments of baby food, diapers, and basic supplies from Israel to Syria.

Our previous campaign: hundreds of volunteers of all ages throughout Israel collected much needed supplies

The Keshet School in Jerusalem set aside its biggest classroom for us to amass the donated supplies. School students, youth groups, and young men and women in pre-military programs rolled up their sleeves to help us pack. A Bar Mitzvah boy asked that all of his gift money be donated to the drive. Several residents of Tekoa, which has been a steady source of support, volunteered to make a video for our campaign. (On a personal note, when my 14-year-old daughter found the video through a Facebook connection – not mine – she promptly brought me 400 shekels of her own hard-earned money which she insisted on donating. 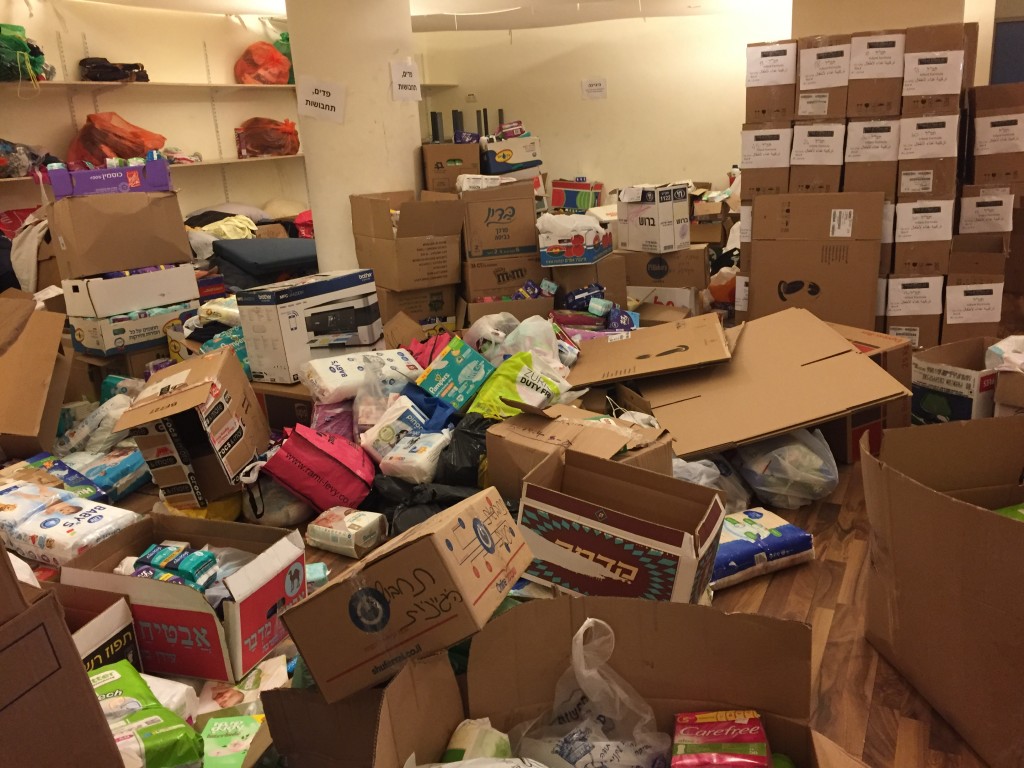 The Keshet School transformed a classroom into a makeshift warehouse 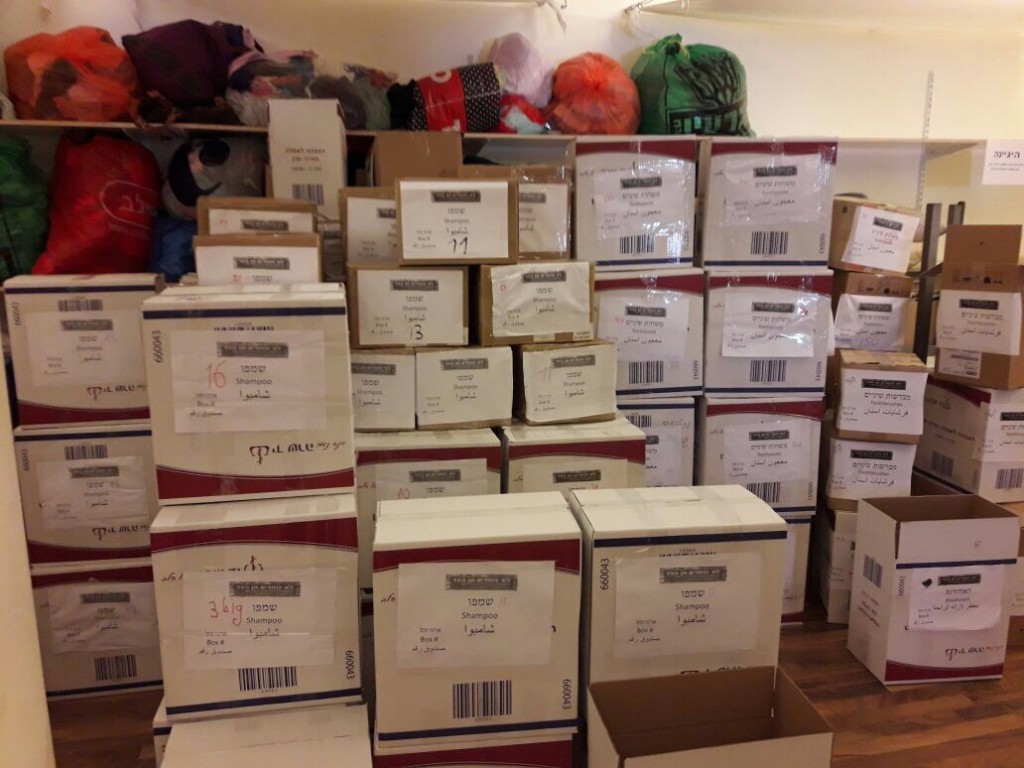 Of course, we have heard criticism. Mostly the rabbinic adage that “the poor of your own city come first.” But our city has not been subjected to seven years of war, with half a million dead and millions driven from their homes. Moreover, as some donors wrote on their boxes, “thou shalt not stand against the blood of thy neighbor.” And then again, we get to determine “the poor” and “our city,” don’t we? The victims over the border, the women and children who have not sinned – well, they are my poor, and the city of empathy is the one I choose to reside in.

Today, in late October, winter is around the corner. Millions of Syria’s innocent displaced people and refugees will suffer and struggle to stay alive in the cold. We’ve set a goal of raising 400,000 shekels for jackets and blankets for children. Thus far, we’ve raised a quarter of that. There are only seven days left to donate, and we need your help.

Personally, as we pack these supplies into boxes and send them north, I often think about war: About the way some of our grandparents were forced to flee a darkening continent and about the way we, as a country, are often forced to prepare for wars of our own—amassing arms and munitions. But this is something else entirely. It is the amassing of good will, the antidote to war.

About the Author
Social activist Aliza Raz-Melzer is one of the 6 Founding Mothers of the grassroots "We Cannot Remain Silent" organization sending aid to Syrian women and children refugees. Currently pursuing her doctoral studies, Aliza’s day jobs include working as an editor and translator and co-heading the "book stops" on the Mesilla Park in Jerusalem which she co-founded. American-born, Aliza was raised in Jerusalem where she currently resides with her husband Amiad and their three children.
Comments
Advertisement