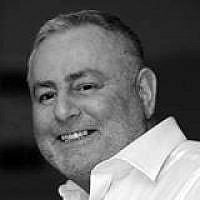 On Wednesday night Sussex Friends of Israel hosted a remarkable evening. We had the great pleasure of listening to Yotam Polizer, Asia regional director of IsraAID The Israel Forum for International Humanitarian Aid.

To a packed room Yotam described the selfless work this NGO carries out in more than 40 crisis-hit countries across the globe.  To audible gasps from the room he showed us pictures of IsraAID volunteers – Jews, Christians, Muslims and Arabs – literally plucking refugees from death off the coast of Lesbos.

He told us stories of how IsraAID is the only aid group offering medical assistance directly to refugees on the beaches. He shared with a stunned room the work they have done and continue to do to help the traumatised children of the Japanese tsunami, of the relief they are bringing to Ebola victims and those treating them in Sierra Leone and survivors of the devastating earthquake in Nepal.  Yotam and his team are saving lives today across the world – voluntarily and without any overriding concern for their own safety. It was emotional, galvanising, shocking, saddening, concerning and most importantly unbelievably inspirational.

We then heard from Yiftach Curiel, spokesperson of the Israeli Embassy in London, who told us the impossible task they face to get the world to recognise and acknowledge the enormous good Israel does across the globe – while the media disproportionately bashes Israel, be it   for an escaped zoo animal or its legal right to protect its citizens from terror.

Finally we heard from Rabbi Hershel Rader of the Brighton and Hove Hebrew Congregation who emphasised that it was the very concept of tikkun olam – healing the world – and the moral obligation to help all human beings that lies at the heart of the Jewish people and the Jewish nation.

And then I read this Tweet from the BDS… 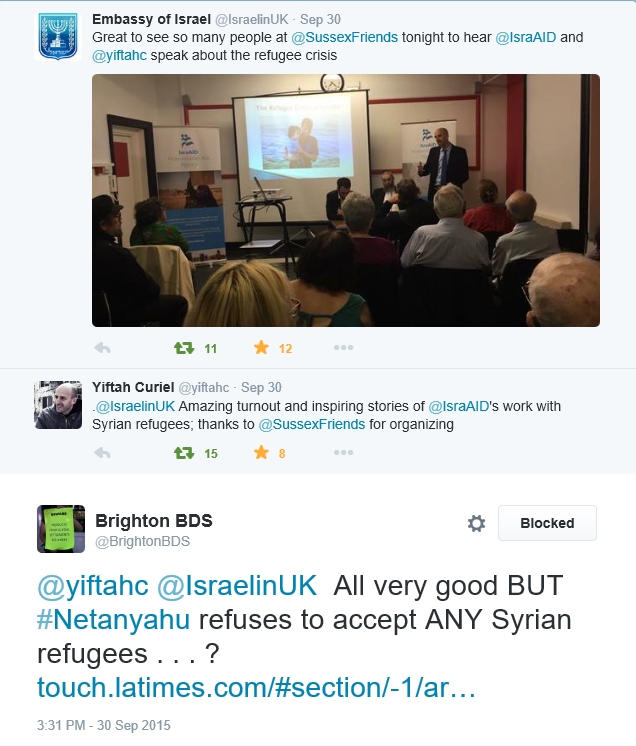 All very good BUT #Netanyahu refuses to accept ANY Syrian refugees!!

At first I ignored this tweet. It is the normal hyperbole we see countless times a day. Just another way to express their disgust at the Zionist entity: vitriol we’ve had thrown at us repeatedly over the years.  I went to sleep thinking, “Mah nishtanah? – So what else is new?”

When I awoke at 2.30 am, suddenly it hit me. This tweet is significant. This tweet allows us into the dark recesses of the BDS mind. Let me explain why.

Factually, the tweet is correct. The democratically elected Prime Minister of Israel made a decision: at present no Syrian refugees will be allowed to enter Israel.  PM Netanyahu said:

“Israel is not indifferent to the human tragedy of the refugees from Syria and Africa. We have already devotedly cared for approximately 1,000 wounded people from the fighting in Syria, and we have helped them to rehabilitate their lives.”

We must control our borders, against both illegal migrants and terrorism.

It is a decision with which many in Israel disagree – and do so openly, in public and in the Knesset. It is a decision that has been openly contested, igniting a heated debate on what Israel should be doing to address the world refugee crisis.

And yet, as we learned last night, Israel is helping.  It is treating victims of the war in field hospitals on the Golan.  It is opening its hospitals to children caught up in the violence.  Israeli volunteers help on the ground. Food drives provide much needed aid.  In fact, Israel is doing far more than many other countries – in stark contrast to most Gulf States.  A report by Amnesty International (and yes it pains me to quote Amnesty but I hope in this instance you will forgive me) from December 2014 says:

Even Britain’s decision, announced by Prime Minister Cameron on September 7th,  to only accept 20,000 refugees over the next five years seems derisory in light of the thousands fleeing devastation and certain death every day.

What makes Israel’s humanitarian efforts even more remarkable is that, as far as I am aware, none of these other countries is at war with Syria. None has been attacked by a country which, four times in the past 70 years has sought to wipe Israel off the map.

They most certainly don’t care about the Palestinian people.

They care only about attacking Israel and if they have to use Syrian refugees or the Palestinian people to do it, so be it.  Their aim is simple – they want the only Jewish state in the world gone.

This one tweet shows that the BDS will, without any reservation, happily use the suffering of the Syrian migrants, which IsraAID is doing so much to alleviate, as an opportunity to attack Israel.

This one tweet unequivocally and unambiguously proves that, to the BDS, the suffering of any people is far less important than the demonization and vilification of Israel.  To the BDS no matter what Israel does, no matter what it achieves, no matter how much relief it brings –  it will never be enough.

During the 10 years that the Brighton BDS have had a ‘stall’ at the Clock Tower in Brighton have they ever flown a Syrian, Iraqi, Yemeni or even (Heaven forbid) a British flag?  Of course not. Doing so would detract from their ultimate goal: the dismantling of Israel.  They are exploiting the Palestinians to vilify Israel: nothing more, nothing less.

In contrast to their new spiritual guru and poster boy, Labour leader Jeremy Corbyn – who cannot bring himself to even speak the word ‘Israel,’ even when addressing the Labour Friends of Israel meeting at the Labour Party Conference in Brighton this week – the BDS movement cannot say it enough.  At every opportunity, at the expense of suffering people, the BDS will attack Israel because that’s all they know how to do.

With this one tweet, any pretence of being a pro-Palestinian movement has been dispelled once and for all. The BDS are intent on the destruction of the state of Israel, fuelled by a deep-seated and underlying antisemitism.

And yet this tweet has finally made clear to me what we must do to defeat the BDS.

When needed, we must attend more rallies and demonstrations and yes, endure more name-calling and intimidation.  We must write more letters to MPs and not get more frustrated with the responses.

We must buy more Israeli products and encourage others to do the same.

We must spend more money in Israeli shops and proudly carry their bags without any more fear.

We must confront more shops, universities and councils that have decided that boycotting Israeli goods or services is a solution to the Middle East crisis.

We must raise more and bigger Israeli flags and not care anymore who sees them.  We must sing Am Yisrael Chai with more vigour and more passion and not care who hears it.

We must draw more pictures, design more memes, make more posts, and engage more on social media with people who want to hate us or don’t know the truth.  We must send more tweets and not be more disheartened at the hate we receive in reply.

We must attend more meetings – both ours and theirs – and ensure that our voice is heard more.

And finally, we absolutely must support more groups like IsraAID, whose work is the essence of tikkun olam and lies at the basis of all we know and love about Israel and the Jewish community.

Friends, if we all do a little more, with all of us working together with our skills and capabilities, all of us focusing in the right direction, I promise you that we will consign the insidious evil of the BDS movement back to a dark, antisemitic era and the place from whence it came.