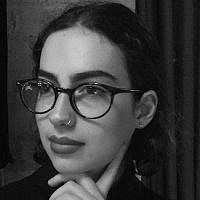 The Blogs
Naomi Magnus
Apply for a Blog
Please note that the posts on The Blogs are contributed by third parties. The opinions, facts and any media content in them are presented solely by the authors, and neither The Times of Israel nor its partners assume any responsibility for them. Please contact us in case of abuse. In case of abuse,
Report this post. 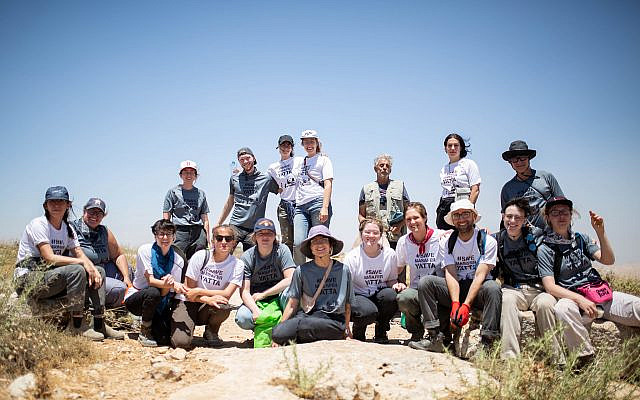 Some of the delegation (Emily Glick)

Last month, I joined 40 Jewish leaders and activists on the Centre for Jewish Nonviolence (CJNV)’s seventh delegation, and the first of its kind since COVID-19. CJNV brings Jews from the Diaspora to Israel-Palestine to act in co-resistance projects in solidarity with Palestinian and Israeli nonviolent activists. On the first day of the delegation, I arrived late to East Jerusalem, having spent the last five days in Tel Aviv seeing friends and family, going to the beach, and complaining about how bad the exchange rate was. In many ways ‘liberal’ Tel Aviv seemed a world away from the areas I would be spending my time in over the next 10 days, despite being less than 50 kilometers away.

After spending our first day in East Jerusalem, we set off early on Tuesday to Masafer Yatta, a collection of a dozen rural Palestinian villages spanning thousands of acres in the South Hebron Hills, within ‘Area C’ of the West Bank (aka the area formally under full Israeli military and civil control). There we met with Ali, from the village of Tuba. He explained how, in the early 1980s, the IDF declared this area as a restricted military zone, calling it ‘Firing Zone 918’. According to a cabinet minute of 1981, (then agriculture minister) Ariel Sharon explicitly stated that the purpose of such a redefinition would be to enable the expulsion of the local Palestinian residents from the area. Palestinian families had been living in the area since before 1967. They lived in 12 small villages, in natural or man-made caves, and made a living as farmers and shepherds. 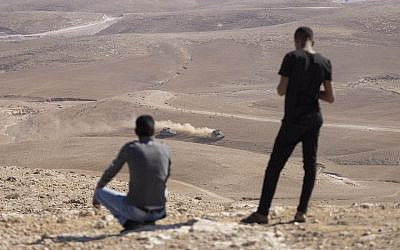 Palestinian residents from the village of Al-Majaz look on as the Israeli army trains in Masafer Yatta, June 21, 2022. (Oren Ziv)

In October and November 1999, the military expelled all 700 or so residents of these communities on the official grounds that they were “illegally living in a firing zone”, including Ali, who was only one-years old. As classified IDF documents show, declaring land as a firing zone is just one way of stealing Palestinians’ land and giving it to settlers, thereby displacing Palestinian communities.

Soon after, the villagers took the case to the courts, where the IDF argued that the villagers hadn’t established permanent residency, despite being presented with evidence to the contrary as far back as the Ottoman Empire. Despite this, the Israeli Supreme Court endorsed last month endorsed the IDF’s position, and ruled that Article 49 of the Geneva Convention – which prohibits forcible transfer of people from occupied territory – did not apply to domestic law. This ruling gave the IDF the legal authority to displace the 1,200 Palestinians living in eight of the twelve villages in the area. 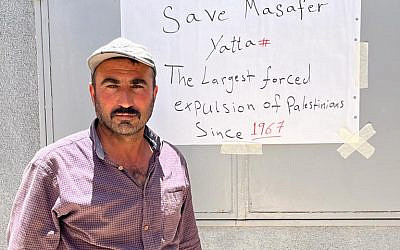 Mohammed Ayoub poses with a #SaveMasaferYatta sign in his village of Khirbet al-Fakheit. He and 17 members of his extended family in Fakhiet were made homeless in the space of 30 minutes, and are now living in a single tent. (Credit own)

Myself and others from our group stayed overnight in Umm Al-Khair, one of those eight villages. The settlement of Carmel is literally up the road from Umm Al-Khair, and built on land expropriated from it. While residents of Carmel live in large, air-conditioned homes lined with trees, Umm Al-Khair consists of a children’s playground and community centre, and a few makeshift homes; any permanent dwellings are routinely demolished by the IDF. Carmel looks like a ‘lovely green oasis that looks like an American suburb’. While settlers’ children have access to swimming pools and irrigation systems, residents of Umm Al-Khair have to rely on expensive water tanks, as they are denied connection to water or the electricity grid. This is what occupation looks like: the chickens of Carmel’s poultry farm have more electricity and water than the families living in Umm Al-Khair.

The following day, we woke at dawn, tasked with repairing a road that had been damaged by the IDF in order to limit Palestinians’ access between the villages and into Israel. While Israelis from the surrounding settlements have access to high-quality roads and even buses, Palestinians are dependent on extremely basic desert roads to get around.

Though we succeeded in rebuilding parts of the road, when we returned to open a different road blocked by settlers from the outpost of Mitzpe Yair later in the week – a road which even Israeli courts have ruled must be kept open – we were met by settler and state violence. Rather than enforce the court ruling, the Israeli army beat us, threw stun grenades and fired tear gas at us. This was my first experience with tear gas, and it was – unsurprisingly – deeply unpleasant. Though the immediate effects worse off quickly, the canister landed by my feet, burning my trousers and leaving me with a first-degree burn which still hasn’t fully healed. 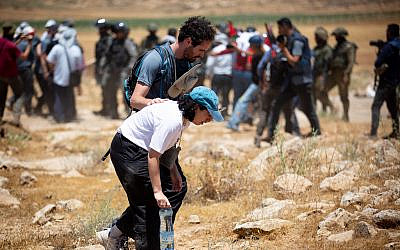 Yet what left the biggest mark on me during my time in Masafer Yatta wasn’t that tear gas canister, but the stories of the people I met. One that stayed with me was that of Eid and his simple dream of going to the beach in Tel Aviv. There was, of course, a significant obstacle: as a Palestinian resident of the West Bank, Eid would need to be granted a permit to enter Israel. Having applied and been rejected 18 times, he had almost given up hope. It was only with the help of visiting American friends who applied for the permit on his behalf, and travelled with him from Umm-Al Khair to Tel Aviv, that he was finally able to accomplish his simple dream after years of trying and failing.

Returning to Tel Aviv at the end of my trip, Eid’s words rang in my ears: ‘We will not see peace until all of us can feel the beach.’

About the Author
Naomi holds an MPhil in International Relations & Politics from the University of Cambridge, and is a Director of Na'amod: British Jews against Occupation. She is based in Glasgow.
Related Topics
Related Posts
Comments 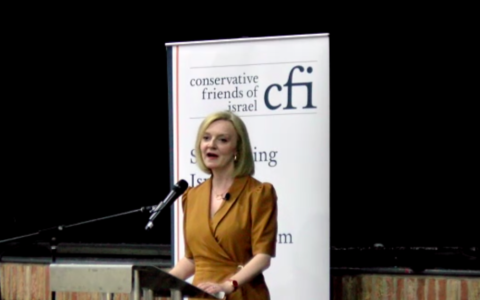