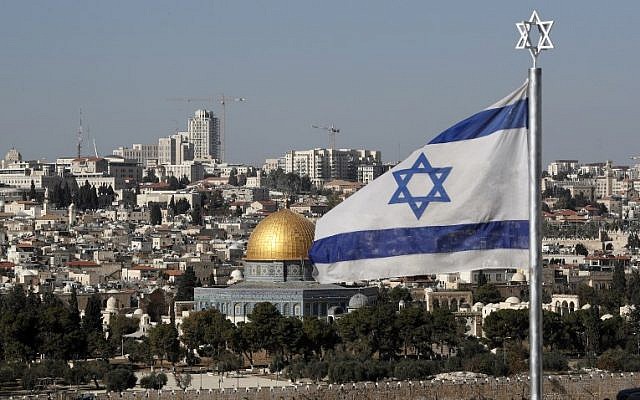 The Israeli flag flutters in front of the Old City of Jerusalem's Dome of the Rock on December 1, 2017. (AFP Photo/Thomas)

I am a Zionist. Passionate and unashamed. For some, Zionism is an ideal. They write about it. They promote Zionist causes in the countries they live, they even dedicate their lives to Israel. They live for Israel. Me? I live for Israel, but more importantly I live Israel. I could not be whole, if I didn’t live here.

It started back in October 1973. That Yom Kippur was the first Yom Kippur after my Bar Mitzvah. I was now a man, and I intended to do everything right, that Fast. No brushing teeth, not wearing leather shoes, walking to the shul, even if it was five kilometers from home. I intended to daven fervently throughout the service, but I just couldn’t do it; halfway through Yizkor, I broke and I had to go out for some fresh air.

I was sitting on the parapet with some friends, when I saw someone wearing a kippa and a tallit jump out of his car and rush into the shul. My first thought was, what was he doing in his car on Yom Kippur? But something told me to follow him inside. When I entered the shul, everyone was feverishly whispering and the buzz was beginning to drown out the cantor. At last, the cantor was told to stop and the rabbi announced that he had just heard that Israel had been attacked by the Egyptian and Syrian armies. He did not mention how he had come by this information on the Sabbath of Sabbaths, but it certainly wasn’t by divine interruption. Anyway, it didn’t matter. Israel’s peril trumped the holiest day, that year. The fear and concern was palpable; I was struck by how much the fate of a little country, thousands of miles away, affected the lives of all these people, most of whom had never even set foot in it. This was the first sign for me of how special Israel is.

The seeds of my desire to live in Israel were planted that day.
I first visited Israel in 1978, for a two month visit. The excitement I felt when we landed, was indescribable. I had a lump in my throat and I felt I would start crying at any moment. I cannot think of any other country that can evoke so much emotion from someone visiting it for the first time. By the way, the visit lived up to all the hype. I fell in love with Israel, and it was then I knew that I was going to come and live here.

In 1982, I made aliyah. How does one express the feeling of serenity that descended upon me when I landed in Israel once again? It was like at last, I had come home, here is where I belong. I left my home at 16, and for six years I was without a permanent home. I had a deep yearning to lay down roots and Kibbutz Tuval, a fledgling kibbutz, not even a year old, in the Galilee was where I chose to do that. At the time, it was just mud and rocks, but together we determined to make it our home. That was 36 years ago, and I am still here, as deeply in love with the home I have built as I was then, as a young idealist.

Hebrew is such an emotional language. From the moment you first hear it spoken, even if you do not understand a single word, you feel that it is an integral part of you. You want to understand it, to speak it. I would pray in Hebrew. I could pronounce the words and follow the service. But I didn’t really understand the prayers. I knew the gist of the prayers but not the meaning. Once I learned Hebrew, it was like an epiphany. Suddenly I could appreciate the meaning of the prayers, being able to understand what I was reciting, blew me away. It was like a new dimension had been added to my faith. Only when you can understand the profundity of the words written in our Torah, can you appreciate the visceral connection between Jews, their heritage and their ancestral homeland.

Ordering a cup of coffee in an Israeli is an interesting experience. There are original ideas about the way it is served. You can choose between having it upside down or mud!?

Once, I took a week off work with a few friends to visit Mt. Hermon. To see the snow. We took a bus to Kiryat Shmona, the northernmost city in Israel. When we got there, we found out that the site was closed, due to melting snow. So, we decided to go down to Eilat, to enjoy the sun and sand. Eight hours travel on a bus, and we were in Eilat. From the snowcaps of the Golan, to the desert of the Arava, in eight hours. Only is Israel.

At the age of 24, I volunteered for the army. I served in infantry. During one reserve stint, I was a sergeant in command of a squad of ten soldiers, guarding Joseph’s Tomb, in Shechem (Nablus). There was a period of violence and unrest in the area and Israel’s Chief of Staff, Moshe Levi, decided to pay it a visit. There were frenzied preparations, with tins of boot polish, and briefings on topography and strategic strengths and weaknesses, a right panic. We received him at the entrance to Joseph’s Tomb. Lt. General Moshe Levi stood in front of us, 6 ft, 6 in tall. I am all of 5 ft, 4 in. He pointed to me and asked, “Which kibbutz are you from”? I stammered out my reply and he asked me if I knew so–and-so and to send him his regards. Only in Israel. I don’t remember the rest of the conversation, I only remember looking at his boots and thinking, “He must be a 48! How do they make boots that big”?

The true nature of Israel comes to light during reserve duty. Our platoon had a company CEO, a taxi driver, a gay curtain salesman, a kibbutznik (me), a home renovator and a school teacher. It was the most natural thing in the world for us to meet up every year, all coming from such diverse walks of life, to serve together. Despite our backgrounds and conflicting political views, you could never find a closer knit unit. We never missed a year together. One year, we all volunteered to do reserve duty in the Golan Heights over Pesach. We held our own Pesach service, and invited foreign UN officers stationed in the Golan Heights to join us. That was one of the most memorable Pesach seders I have ever had.

Living in Israel, you can’t escape the terrorist attacks and the wars. It is with you always; either the threat or the aftermath. But, in times of distress, all of Israel comes together. We set aside our differences and our petty political squabbles and open our hearts. The following anecdote illustrates more than anything else, what makes Israel truly special. Max Steinberg was a lone soldier. That in itself is special. He came to Israel from the United States to serve in the army. That doesn’t happen anywhere else. He was tragically killed in service of his adopted country in Operation Protective Edge. He had no family in the country. It was feared that a minyan could not be found to hold the memorial service. Maccabi Haifa, a football club received word of this, and appealed to its fans to attend the funeral so that there would be a minyan. Thirty-thousand people attended this hero’s funeral! None of them knew him, yet the deep appreciation for the ultimate price he paid, was expressed in the most fundamental respect that could be shown.

Israel is no longer the country I envisioned when I made aliyah 36 years ago. I can no longer justify some of its actions, done in my name. Sometimes I feel that my dream is being wrested from me and I am gripped with an anger and despair, that the shame is a deep pain in my heart. This country is deeply divided and the political divide is bitter and acrimonious. However, I remain loyal to both the country and my ideology. I am determined to fight just as hard for Israel to be safe and for its right to exist, as I do for its soul. It is a commitment of conscience. This is my home. I have no desire to live anywhere else. My destiny is here. I will fight for what I believe. I do not have the luxury to give up, and I will not abandon her. No other country or culture can evoke these deep emotions in me. Only Israel.