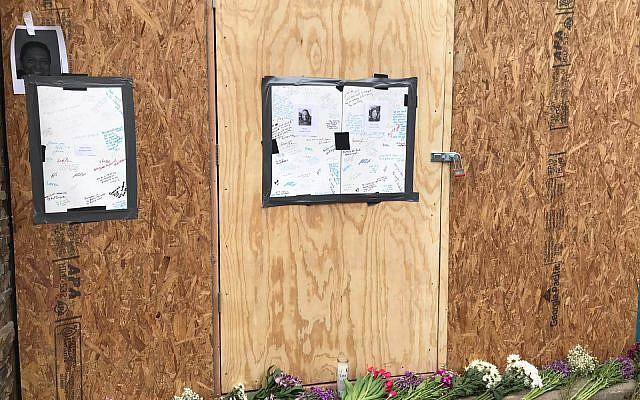 Outside of the Kosher supermarket in Jersey City, New Jersey. (Photo Credit: @JacksonKrule)

It has been a really hard week for Jews across the world. First, a shooting at a Kosher supermarket in New Jersey, and now a synagogue vandalized, Torah scrolls destroyed in Beverly Hills of all places. “It is a scary time to be a Jew” a friend from Los Angeles told me yesterday.

At times like this, I frequently find myself turning to the internet to find articles that will make sense of all of this madness in the false hope that a few well written articles in The Atlantic or the New York Times will not only explain anti-Semitism, but make it go away. One particularly futile way that we try to make ourselves feel better is to blame politicians from the opposing political party. “If only there wasn’t an anti-Semite in the White House this would never have happened” people on the left say, “This is all a result of the anti-Semitism on the New-Left” others tell themselves. Of course, this is not true. But wouldn’t it be wonderful if it was so simple!

The truth is that anti-Semitism is so pernicious, dangerous and impossible to understand that it will never fit in to a succinct definition. Any attempt to do so is futile. We have to understand that our desire to blame politicians for any given anti-Semitic attack is really just an attempt to make sense of this new, terrifying phenomena and to find a culprit that we can easily identify.

There is another type of understandable, though in my opinion equally flawed response that we hear a lot at times like this as well: Attempts to demonstrate how strong we are and that we are not afraid. This makes a lot of sense. We feel weak and vulnerable, and the natural thing to do at a time like this is to want to feel strong and in control. The truth however, is that these attacks demonstrate that we actually aren’t that strong and are definitely not in control.

When I hear these types of responses to anti-Semitic attacks I am reminded of a story that I heard at the shiva of Rav Menachem Froman. A student of his recounted the following story:

The tragedy and pain was immense. Yeshiva students murdered while preparing Shabbat dinner. One of them choosing to sacrifice his life for the sake of the rest of his friends. How could this happen? How can God let this happen in a yeshiva of all places!? The natural response was to show solidarity, strength and courage.

The following Shabbat the yeshiva had a massive turnout. Over 400 students, alumni and friends came to the yeshiva in a show of support. In order to demonstrate their resolve and strength they did what yeshiva students know how to do very well: they sang and danced with great enthusiasm.

After hours of excited and dramatic dancing Rav Froman rose to address the crowd. He stood before the yeshiva and began to cry. “Only professional Jews pretend to be strong after a tragedy” he told the students, “Real Jews cry.”

What does it mean to be a professional Jew? I think what he meant was that ‘professional’ Jews are not in touch with their emotions. They go through the rote motions of living a Jewish life without the pathos and the emotion that being a real Jew entails. Real Jews know how to cry.

I think that we are a moment when what it means to be a real Jew is to cry. This week people were killed for the crime of shopping in their local Kosher supermarket. Torah scrolls were destroyed because of the deep hate that somebody felt in their heart against us. Of course we should increase security and take all necessary precautions to attempt to better prevent attacks like this in the future. Our real response however, should be to realize how vulnerable we truly are, to ask God how can a tragedy like this can happen, and to cry.