The Blogs
Susanna Kokkonen
Speaker on Jewish-Christian relations; anti-Semitism; the Holocaust and persecution
Apply for a Blog
Please note that the posts on The Blogs are contributed by third parties. The opinions, facts and any media content in them are presented solely by the authors, and neither The Times of Israel nor its partners assume any responsibility for them. Please contact us in case of abuse. In case of abuse,
Report this post.

Nazi Germany’s occupation of Denmark began in 1940. At first, it may not have seemed to have a huge practical impact on everyone’s life. The population including Danish Jews continued their normal lives. In 1943, a secret order became known to the Danish resistance; it was the August 1943 deportation order for the Danish Jews. With the involvement of the resistance, the police forces and the government, something of a miracle took place. Within about three weeks, beginning in October 1943, 7000 Jews were evacuated to the Swedish side of the coast; in addition about 700 non-Jewish relatives were whisked away too.  (The remaining about 500 Jews were taken to the Nazi model ghetto/camp of Theresienstadt.)

Looking at the map of Denmark and Sweden, it is possible to see the routes the fishing boats would have preferred; they made their way to the Swedish coast near the cities of Malmö and Helsingborg. About 1200 such refugees also arrived in the harbors near the town of Höganäs. This is a smaller town in Skåne region not fat from the two cities. Because of the town’s small size, many town residents were involved in receiving the Jewish refugees. These included a local customs officer Gunnar Nilsson, who was actively involved in finding actual rescue routes.

There was an open hand on the Swedish side of the sea to receive these unfortunate people. It is no wonder then that Open Hand is a symbol of this rescue. Swedish artist Kerstin Ahlgren, who is known for her art being displayed in public and official sites, created an art work in the memory of the rescue in 2003. She called it Open Hand. It is situated at the harbor of Höganäs. On the occasion of the January 27, 2020 Holocaust Memorial Day, I was the speaker at the memorial events in and around Höganäs. I was able to visit Open Hand. 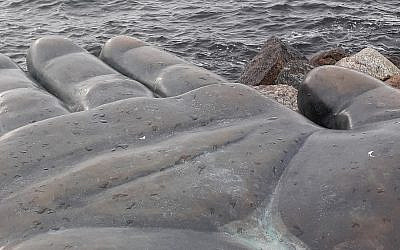 Sadly, Open Hand had recently been vandalized – apparently someone thought it fitting to vandalize the symbol of human spirit, human generosity and, indeed, of a historic event. This whilst the rest of us were preparing to recall the most horrific events of human history.

This is not enough. On another nearby country, a couple of days earlier (on the actual Memorial Day) in the town of Turku, Finland, a synagogue had been vandalized with red paint. It looked eerily like blood on the outer walls of the building. The message could not have been clearer.

It seems that there is no Open Hand anymore. There are those, who gather to remember and there are those, who gather to vandalize and destroy. The middle ground belongs to the silent bystanders. The bridges of understanding and shared history, which have been built after the Holocaust, are very fragile. I know this because, to a small extent, I have had the incredible privilege of building them too.

But now there is a continuous assault on history and memory.

The bridges are fragile. Can they withstand this assault?

About the Author
Dr. Susanna Kokkonen, originally from Finland, has lived in Israel for the past twenty years. She has a doctorate in Holocaust Studies and has pioneered Jewish-Christian relations including at Yad Vashem, as the Director of the Christian Friends of Yad Vashem. She travels around the world speaking about Israel; the Holocaust, anti-Semitism and current issues.
Comments