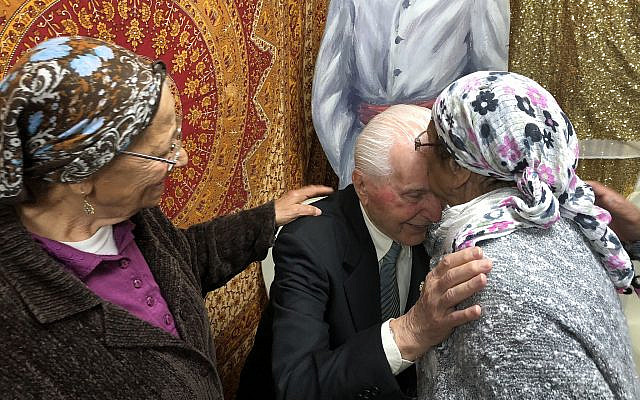 Capt. Elgen Long, the last surviving crew member of Alaska Airlines' who participated in bringing the Yemenite Jewish community to Israel, in operation On Eagles Wings in 1949, during a 2018 visit to Israel. (Credit: Shahar Azani)

Let me start by saying that I am a big fan of yours and have been one for many years, even since before the 2007 Knocked Up hit. First, because you truly make me laugh, and in this world of ours, it is plenty right there. There is something about your sincerity, your everyday modesty, your incredible ability to connect with the ordinary person, and create a sense of familiarity. Thank you for bringing a smile to so many faces around the world.

But that’s not the only reason I like you. A few years ago, I stumbled upon your 2014 testimony before Congress about Alzheimer’s disease. With an artful mastery of pain and joy, you portrayed the image of your late mother-in-law, Adele Miller, who sadly passed away on February 1st, 2020, after suffering and diminishing from the horrible disease. I was shocked to learn that both of Lauren’s parents suffered from Alzheimer’s. You touched a chord with that testimony. I had to watch my late grandmother, Hannah Azani, whom I was very close, diminish over the years. Becoming a shadow of her old self, I kept on reaching to the light, eager to see her again, as she once was, until she was no more. I could feel the pain. Then I learned you were not only a man of words but deeds, establishing Hilarity for Charity, a national non-profit whose mission is to care for families facing Alzheimer’s, educate and empower the next generation of Alzheimer’s advocates.

Seth, to me, you are a hero, which is why I was so so disappointed to hear your statements on the Marc Maron podcast. It’s not that your joke about putting all the Jews in the same bucket isn’t funny. It kind of is. But its the fact that it chillingly resonates with a statement made by Hezbollah’s leader, Hassan Nasrallah, the ruthless and cruel Shiite terrorist organization in Lebanon, who said in a 2002 speech that “If all Jews gather in Israel, it will save us the trouble of chasing them down around the world”.

I can imagine what the world, and to a degree – Israel – might seem like where you sit. Truth to be told, it’s not just you. I am sure you echo the feelings of many who live in these privileged times, unprecedented really in the life of the Jewish people, despite all the antisemitism and other Tsuris. But this wasn’t always the case. In 1943, during the Holocaust, as millions of innocent Jews were butchered in Europe, hundreds of Rabbis marched on Washington D.C. (what a sight that must have been) pleading to meet with FDR and for the sake of their brothers and sisters in burning Europe. They were brushed aside and coldly ignored. Israel guarantees that with a homeland and an army of our own, no longer are Jews dependent on the mercy of others for their lives. We will fight for ourselves and defend ourselves against those out there who seek ill for us. You know them, Seth. You’ve heard them and seen them, on and off the screen.

My view of reality is also very different, Seth. My family came to Israel from Yemen, escaping soon after Israel was re-established because, for them, it was a choice between life and death. My family did not just happen to travel from Yemen to Israel, but yearned to return to their ancient homeland with every prayer and every whisper, until Alaska Airlines airplanes arrived to take them home, carrying them on the wings of eagles, fulfilling the biblical prophecy (Exodus) of “I bore you on eagles’ wings and brought you unto Myself”. Indeed, almost 1 million Jews who lived in the Middle East for centuries, in glorious communities, were ethnically cleansed and eradicated completely.

I also understand and appreciate your sincerity about the Israel conversations you were exposed to while growing up. Our parents and grandparents’ generations were very protective of Israel, knowing its incredible value and appreciating its rare gift; they were selective in sharing some aspects of reality. Truth is it’s a complex one, filled sometimes with lies and disinformation targeted at Israel. However, we have made great strides in the right direction as we prepare the younger generation to what they may see and hear growing up while maintaining a strong Jewish and Zionist identity. However, please remember this: Israel’s geopolitics do not define it. It’s a part of who we are, but not all of who we are. There is much to Israel that is not known, including the constructive role it plays in global affairs, far from the eyes of the media. Serving as an Israeli diplomat in East Africa, allowed me to see firsthand the kind of collaboration Israel has with the U.N. in the work it does on the ground to help people worldwide. I saw immense respect towards Israel, one you do not see in the media. I saw the heart of a nation, a love of people, a desire to proactively change the world, make it a better place. Fix it. Tikkun Olam, as some call it, and it extends far beyond the government, emanating from the people.

One such Israeli woman is Marta Weinstock-Rosin, an observant professor emeritus at Hebrew University of Jerusalem’s School of Pharmacy-Institute for Drug Research. She was the chief developer of Exelon, a drug that improves memory and slows its decline in those who have Alzheimer’s and Parkinson’s diseases. Interestingly enough, due to the Arab boycott, her international partners prohibited the disclosure of Rosin’s identity as the inventor of the drug, since she was Israeli, and only over a decade later, in 1997, was it made public. Rosin’s very background is made of a movie-like material. She was born in Austria and managed to evade the Nazis by fleeing that country with her family in 1939, shortly before the start of the Holocaust. She made Aliyah in 1969 from the U.K. with her late husband, Prof. Arnold Rosin, a leading gerontologist who co-founded Melabev, an organization that provides community care for people living with dementia and Alzheimer’s.

I hope you get to visit and meet with Marta someday, and maybe even create a partnership between HFC and Melabev, and who knows? Perhaps even find a cure for Alzheimer’s!

The Jewish State is a promise, Seth.

It is a promise of hope, of living a decent Jewish life, not at the mercy of others but again as an independent nation, seeking peace yet ready to defend itself against any threat. Prepared to stand by any Jew in need around the world, whether in Venezuela (where, under Hugo Chavez, Jews suffered from great antisemitism and acts of violence), or the few Jews left behind in Yemen or Ethiopia in need of help. Israel is a realization of a dream, of blooming deserts and open hearts. It is a story of courage and tenacity, against all the odds, of a nation rising from the ashes of history to continue writing its story.