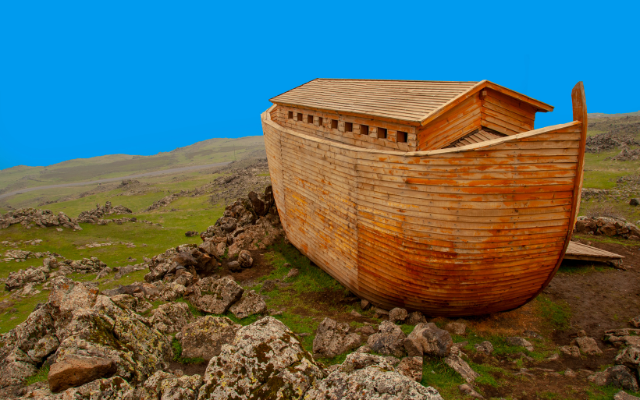 You’re just one decision away from a totally different life!

Are we living in the best of times or the worst of times? In many respects, it seems like both! On the one hand, modern technology, and scientific development impacting health, longevity, and quality of life have never been better. But war, politics, and international conflict seem to be on the brink of armageddon.

I fondly recall wishing one of my teachers in Yeshiva a good morning, to which he curtly shot back: “Prove it!”. It’s not hard to understand why some choose to be cynical and skeptical.

I am delighted to share with you a Biblical prophecy in the recent Torah portion that has come to fruition in our times and that assures us that the best days of our lives are yet to come!

It all begins with Noah and the Flood: “In the six hundredth year of the life of Noah…all wellsprings of the great deep burst open, and the windows of heaven were opened…” Here’s how the Zohar (the foundational text of mystical Kaballah) interprets that: “In the six hundredth year of the sixth millennium the gates of wisdom above and the wellsprings of wisdom below will open, and the world will prepare to enter into the seventh millennium, just as a person prepares on the eve of Shabbat to enter Shabbat.”

Considering that we have just entered the year 5783 since creation, the six hundredth year of the sixth millennium works out to be the year 5600, corresponding to the year 1840 in the secular calendar. A quick look at history reveals that that year marked the apex of the Industrial Revolution when man was replaced by machines and when discovery and invention exploded resulting in the exponential growth of the pleasures of life.

At the same time, 1840 also marked the year that the teachings of G-dly wisdom—Chabad philosophy—were shared with the world, that is when these awesome teachings were finally printed for distribution en masse. Far from being merely a “denomination” of Judaism, Chabad represents a relentless intellectual attack on mindless faith, seeking to understand and appreciate every detail of our lives, the universe, G-d, the Torah, and man’s role in the universe.

Just like dog years are seven to one in relation to human years, the Torah tells us that “one thousand human years equal one day for G-d.” This means that the seventh millennium is G-d’s Shabbos, when He rests, just like He commands us to. The seventh millennium marks the era of world peace and utopia, marked by the arrival of the Moshiach (Messiah). The hallmark of this era is Divine consciousness and awareness of the presence of G-d’s creative energy in all that exists. Whilst today we see only the superficial layer of everything, during the time of the Moshiach we will be able to see the G-dly energy at the core of all beings, much like an x-ray shows us what lies hidden beneath the surface.

But there’s a caveat: Shabbos doesn’t begin at midnight on Friday. It starts at sundown, roughly three-quarters through the day. In G-d’s calendar, that would equate to the year 5750, which is 1990. Today we stand 32 years past the ¾ mark on G-d’s Friday—dangerously close to the onset of Shabbos! What this means is that Moshiach is due to come at any moment now! All the meshugasthat consume the world from Ukraine to Tehran and from Palestine to Pyongyang are all the birth pangs of Moshiach, preparing the world for the cosmic Shabbos of consciousness and awareness. If you want to see the rainbow, you’ve got to put up with the rain.

And just like there is a mitzvah to taste the delicacies of Shabbos in advance as an appetizer, we too have been granted access to the secrets of Divine mysticism as we now have access to so much wisdom, available to anyone, everywhere, at the touch of their fingers to their keyboards!

Robin Sharma said that “we can’t live the same year seventy-five times and call it life.” There is no way that we were born to just pay bills and then die! The Torah reveals to us that this world is a progression—an accumulation of merit of all prior generations that will result in an era of peace and prosperity, awareness, and consciousness, that is what Moshiach is all about. Death is not the greatest loss in life. The greatest loss is what dies inside of us while we live. We must wake up to the promise of a brighter tomorrow which our People have carried in their hearts for thirty-three centuries since Sinai.

After the passing of Rabbi DovBer of Mezeritch in 1772, Rabbi Menachem Mendel of Horodok led a group of Chassidim to settle in the Holy Land.

One day, a somewhat deluded individual climbed the Mount of Olives in Jerusalem and sounded a shofar. Soon the rumor spread that Moshiach had arrived, setting off a great commotion in the street. Rabbi Mendel went to his window and sniffed the air. “No,” he said, “unfortunately, the redeemer has not yet arrived. On that day, ‘the world shall be filled with the knowledge of G‑d as the waters cover the sea,’ and ‘all flesh will perceive’ the reality of the Creator. I do not sense the divine truth that will permeate the world in the era of Moshiach.”

Said the renowned teacher of Chabad wisdom, Rabbi Grunem Estherman: “Why did Rabbi Mendel need to go to the window to sniff for the presence of Moshiach? Because the all-pervading truth of G‑d was already a tangible reality within the walls of Rabbi Mendel’s room.”

Before his passing in 1994, the Rebbe assured that the era of Redemption is already here. We just need to “open our eyes!” He urged us to learn as much as we can about this amazing era of the future as it is taught to us in the Torah, in Kabbalah and elucidated for the layman in the teachings of Chabad philosophy.

We encourage you to learn more about this stunning era in our online courses at YouTube.com/JewishGardens. Others can open doors for you, but you’ve got to walk through them yourself! Your best days are not behind you. They’re ahead of you!

About the Author
Rabbi Dovid Vigler blends together the African culture in which he was raised with the esoteric Chassidic pulse of his passion. He serves as the Founder and Spiritual Leader of Chabad of Palm Beach Gardens FL together with his wife Chana. He is the host of Schmooze Radio, South Florida's only Jewish Talk Radio Show. Archives, Blogs, and more are available at www.JewishGardens.com
Related Topics
Related Posts