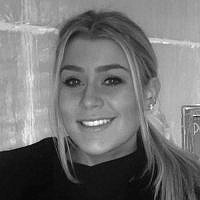 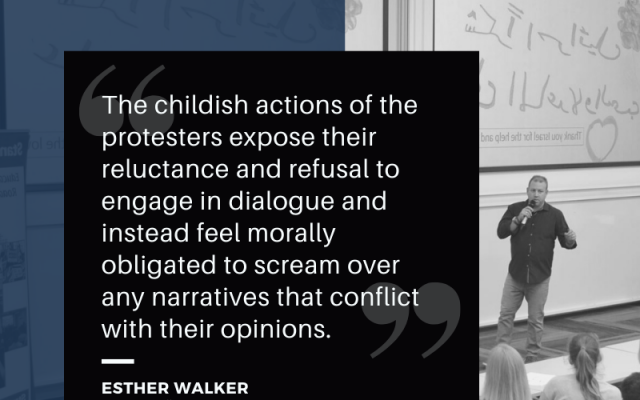 On Monday, November 18th, King’s College London’s (KCL) Israel Society hosted Lt. Col (ret) Eyal Dror of the Israeli Defence Force (IDF) to speak, in collaboration with UCL Friends of Israel Society and StandWithUs. Col Dror was invited to speak on a severely underreported topic – Israel’s humanitarian mission in Syria: “Operation Good Neighbour”. The mission is an obviously interesting one: a nation extending aide to a neighbour, with which its relationship has been historically contentious and militarily confrontational.

Unfortunately, the event was protested physically and via social media, by the King’s College Action Palestine (KCLAP) group. Their facebook announcement called for a unanimous boycott of the event, and outlined their plans for an “emergency demonstration”, following the “Israeli bombings (which) killed over 30 civilians in the Gaza strip”. The past several weeks have indeed marked a flare-up of violence in the region, however, KCLAP failed to point out that of these 30 recent “civilian” mortalities, 18 were known Hamas and Islamic Jihad terrorists. Moreover, after a successful targeted IDF mission to eliminate the Islamic Jihadi terrorist Baha Abu al-Ata, whose next attack was imminent, the Jihadis in Gaza responded with a barrage of 200+ rockets toward Israel in the space of a few hours – illustrating the false dichotomy of Israeli aggression toward innocent Palestinians, that KCLAP used to justify their demonstration.

As the event with Dror began, attendees were met by a deluge of protestors attempting to block the entrance. After a 40 minute delay, the security team gave up on attempting to remove boisterous protestors from the corridor, and allowed attendees to go to the sixth floor to the event. Shouts from both the corridor and six floors down outside the building could be heard. Attendees were intimidated at the entrance of the hall with profanities and provocations ranging from “f*** Israel”, to “Zionism is a crime!”. General clamouring was also made whilst Dror spoke, in a deliberate attempt to censor his speech. During the event, there was a small but powerful and peaceful counter-demonstration led by Israel activists Harry Markham of Herut UK and David Collier – the latter who was forced to contact police after protestors physically assaulted him. The childish actions of the protesters expose their reluctance and refusal to engage in dialogue and instead feel morally obligated to scream over any narratives that conflict with their opinions.

Despite the arduous efforts of the protestors, Dror was able to give an insightful and stimulating talk – showing that this event was a success. Dror narrated his time in Syria and spoke of anecdotes which whilst might seem simple, had a huge and lasting impact on the lives of Syrian civilians, recalling how he presented several Syrian children with ice cream for the first time in their lives. He explained how this not only benefited the children, who for once smiled and expressed emotion, but also the mothers who were able to sit at ease – a luxury that wartime has left no space for in Syria.

An audience member asked Dror whether the IDF volunteered in Syria to receive something in return (such as political gain), he answered by explaining that the IDF was always at a geographical disadvantage in Syria. He conveyed how if they had lost the trust of just one Syrian refugee, the IDF would possibly have lost the trust of all the Syrians they interacted with. Dror illustrated the affection and admiration these Syrian refugees came to have for the IDF soldiers with pieces of artwork by the Syrian children and letters of gratitude from their mothers. If critical of Dror’s narrative, why did KCLAP choose to scream and censor, rather than engage in a dialogue such as this audience member? Security instructed attendees and protesters leave via separate exits at the event’s conclusion, evidencing the concreteness of the physical threat to discussion of Israel on campus. Protesters continued their confrontation outside the building. In a tirade against exiting attendees, the demonstrators accused the IDF and generals such as Dror of having conducted “apartheid policies and enforced occupation”, another protester charged the IDF of “on a systematic basis disregards human rights for Palestinian’s”.

This story and countless others are evidence of the politically charged atmosphere at King’s College London, with an extremely large and active KCLAP group, and others who share their moral framework.  These demonstrators were not expressing a concern for the welfare of Palestinians or their proposed state, but were manifesting an unconstructive hatred towards Israel’s mere existence, and this Jewish self-determination in their ancestral homeland. These tactics threatened the freedom of Jewish self-expression and political dialogue on campus. We must not allow such inaccuracy and violence to be normalised at KCL, or anywhere else.