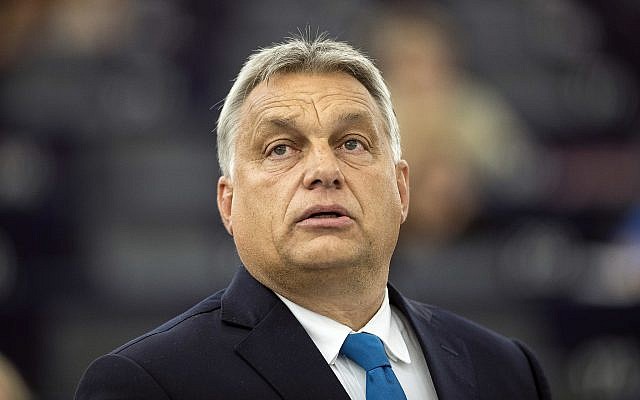 Hungarian President Viktor Orban expressed “zero tolerance” for antisemitism during his state visit to Israel last July, but he seems to be having second thoughts five months later.

Late last month, Figyelo, a pro-government weekly magazine published in Budapest, ran an inflammatory picture on its cover of Andras Heisler, the head of the Federation of Hungarian Jewish Communities, or Mazsihisz, surrounded by floating bank notes. As Mazsihisz correctly pointed out in a statement, the image “revives centuries of old stereotypes against our community.” Such incitement, it noted, was unprecedented since Hungary’s transition from communism to democracy in 1990.

The edition of Figyelo that carried the offensive image accused Heisler and Mazsihisz of accounting irregularities in connection with a state-funded renovation of a synagogue in Budapest. Mazsihisz denied the allegation.

Until very recently, Figyelowas owned by the historian Maria Schmidt, who was involved in a controversy with Mazsihisz over its refusal to support the construction of a Hungarian Holocaust museum. Mazsihisz claimed the proposed new museum would sanitize Hungary’s role in the Holocaust, which claimed the lives of more than 400,000 Jews.

Mazsihisz also stirred enmity within the Hungarian government by its criticism of a statue unveiled in Budapest four years ago. According to Mazsihisz, the statue of an angel (Hungary) being attacked by an eagle (Nazi Germany) implied that Hungary was not complicit in the deportation of Jews to Auschwitz-Birkenau. In fact, a succession of pro-German, antisemitic Hungarian governments were very complicit in this enormous tragedy, as Hungarian officials have already acknowledged.

To no one’s surprise, the controversy elicited the attention of the president of the World Jewish Congress, Ron Lauder. In an impassioned letter to Orban, Lauder wrote that the image on Figyelo’s cover “is one of the oldest and vilest caricatures of the Jewish people, and it places not just the magazine, but all of Hungary, in a very bad light,” at a time when antisemitism is globally on the upsurge.

Saying he understood and respected the boundaries of a free press, Lauder asked Orban to issue a “strong public condemnation of this very clear attack on all Jewish people.” Lauder went on to say that such a condemnation would distance Hungary from this “most disgusting hatred, worthy of the Nazi era.”

Unfortunately, Orban was not up to the task, even though his government had just promised to spend $1.7 million every year on projects to combat anti-Jewish animus. Antisemitism is quite widespread in Hungary, judging by a CNN survey indicating that 42 percent of Hungarians think Jews have too much influence in finance and business.

In his reply to Lauder, Orban wrote, “I’m surprised you are asking me to limit the freedom of speech and the freedom of the press. Despite all my respect for you, I cannot fulfill such a request.”

Orban, an illiberal politician, accused Lauder of voicing his opinions only “when a left-wing public figure of Jewish descent — Heisler — is at the centre of a debate.” Orban added, “It is hard to comprehend the clear left-wing and liberal bias that you demonstrate in Hungarian public affairs. I am uncertain as to whether we should view your letter a political document, or a stand taken for the Hungarian Jewish community.”

Orban’s condescending attitude is difficult to fathom, since Lauder’s letter deals exclusively with the issue of antisemitism. Orban should have complied with his request and condemned Figyelo’s offensive cover. Instead of doing the right thing and setting an example, Orban turned a straightforward issue into a convoluted construct and left the unsettling impression that he condones antisemitism.

Certainly, his virulent campaign against George Soros — a Hungarian Holocaust survivor and American billionaire who funds liberal causes — was troubling due to its reliance on anti-Jewish tropes and imagery.

Canada’s ambassador to Hungary, Isabelle Poupart, had no trouble calling out the magazine. In a gesture of solidarity with Hungary’s Jewish community, she phoned Heisler to register her abhorrence over Figyelo’s “despicable cover.”

It’s regrettable that Hungary’s leader could not bring himself to issue a similar condemnation.